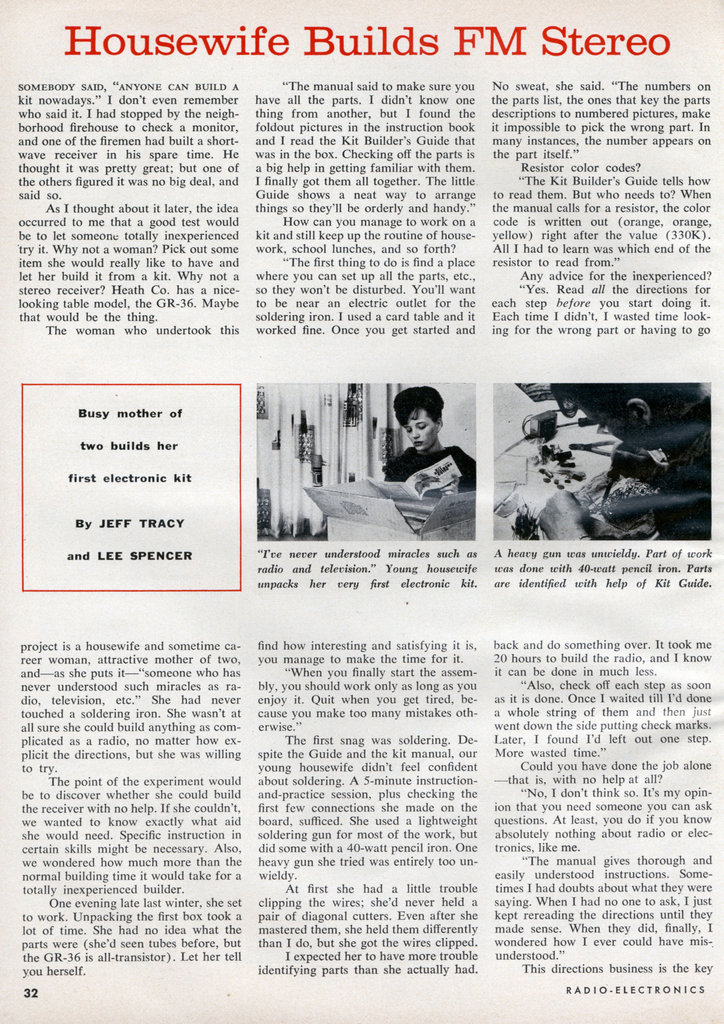 By JEFF TRACY and LEE SPENCER

SOMEBODY SAID, “ANYONE CAN BUILD A kit nowadays.” I don’t even remember who said it. I had stopped by the neighborhood firehouse to check a monitor, and one of the firemen had built a shortwave receiver in his spare time. He thought it was pretty great; but one of the others figured it was no big deal, and said so.

As I thought about it later, the idea occurred to me that a good test would be to let someone totally inexperienced try it. Why not a woman? Pick out some item she would really like to have and let her build it from a kit. Why not a stereo receiver? Heath Co. has a nice-looking table model, the GR-36. Maybe that would be the thing.

The woman who undertook this project is a housewife and sometime career woman, attractive mother of two, and—as she puts it—”someone who has never understood such miracles as radio, television, etc.” She had never touched a soldering iron. She wasn’t at all sure she could build anything as complicated as a radio, no matter how explicit the directions, but she was willing to try.

The point of the experiment would be to discover whether she could build the receiver with no help. If she couldn’t, we wanted to know exactly what aid she would need. Specific instruction in certain skills might be necessary. Also, we wondered how much more than the normal building time it would take for a totally inexperienced builder.

One evening late last winter, she set to work. Unpacking the first box took a lot of time. She had no idea what the parts were (she’d seen tubes before, but the GR-36 is all-transistor). Let her tell you herself.

“The manual said to make sure you have all the parts. I didn’t know one thing from another, but I found the foldout pictures in the instruction book and I read the Kit Builder’s Guide that was in the box. Checking off the parts is a big help in getting familiar with them. I finally got them all together. The little Guide shows a neat way to arrange things so they’ll be orderly and handy.”

How can you manage to work on a kit and still keep up the routine of housework, school lunches, and so forth?

“The first thing to do is find a place where you can set up all the parts, etc., so they won’t be disturbed. You’ll want to be near an electric outlet for the soldering iron. I used a card table and it worked fine. Once you get started and find how interesting and satisfying it is, you manage to make the time for it.

“When you finally start the assembly, you should work only as long as you enjoy it. Quit when you get tired, because you make too many mistakes otherwise.”

The first snag was soldering. Despite the Guide and the kit manual, our young housewife didn’t feel confident about soldering. A 5-minute instruction-and-practice session, plus checking the first few connections she made on the board, sufficed. She used a lightweight soldering gun for most of the work, but did some with a 40-watt pencil iron. One heavy gun she tried was entirely too unwieldy.

At first she had a little trouble clipping the wires; she’d never held a pair of diagonal cutters. Even after she mastered them, she held them differently than I do, but she got the wires clipped.

I expected her to have more trouble identifying parts than she actually had.

No sweat, she said. “The numbers on the parts list, the ones that key the parts descriptions to numbered pictures, make it impossible to pick the wrong part. In many instances, the number appears on the part itself.”

“The Kit Builder’s Guide tells how to read them. But who needs to? When the manual calls for a resistor, the color code is written out (orange, orange, yellow) right after the value (330K). All I had to learn was which end of the resistor to read from.”

Any advice for the inexperienced?

“Yes. Read all the directions for each step before you start doing it. Each time I didn’t, I wasted time looking for the wrong part or having to go back and do something over. It took me 20 hours to build the radio, and I know it can be done in much less.

“Also, check off each step as soon as it is done. Once I waited till I’d done a whole string of them and then just went down the side putting check marks. Later, I found I’d left out one step. More wasted time.”

Could you have done the job alone —that is, with no help at all?

“No, I don’t think so. It’s my opinion that you need someone you can ask questions. At least, you do if you know absolutely nothing about radio or electronics, like me.

“The manual gives thorough and easily understood instructions. Sometimes I had doubts about what they were saying. When I had no one to ask, I just kept rereading the directions until they made sense. When they did, finally, I wondered how I ever could have misunderstood.”

This directions business is the key to a lot of problems kit-builders have, sometimes experienced ones worse than beginners. In most cases of kits returned for factory repairs, directions have not been followed.

Our housewife, for example, rushed in and cut two leads too short on the tiny grain-of-wheat stereo indicator lamp. “I read the directions and I used the ruler, but there they are, too short,” she explained when I stopped to answer a plea for help. “Now the lamp won’t reach through its little mounting grommet on the panel.”

No replacement was handy for this odd little incandescent, so I did a tricky solder job with tiny wires and made it reach.

After the radio was done, I asked what part had been the most difficult. I had figured probably the dial cord would be a hangup.

“Things were going fine until I got to page 13. I had to trim the leads on the power transformer and strip the ends. I was shown how to do it on one and then I tried the next one. It took me forever.

“I was really worn out by the time all five leads had been stripped. I was also discouraged, because I knew there would be more leads to strip. The thought of the struggle with those five was enough to make me want to quit the whole project right there.

“However, I was enjoying myself except for the stripping so I figured I’d go on anyway till I got to the next stripping step.

“Sure enough, on the very next page there were more wires to be stripped. What a relief it was to discover that these were very easy! They were small and slick. All you do is run a razor blade lightly around the insulation and it slips right off. I was told the other wires were stranded and the insulation was cloth; that’s why I had so much trouble.

Well, you know how women are … I was still wondering about that dial cord. I knew the mechanical part of stringing that would really be tough for a woman. But she wasn’t ready to talk about that (I figured I knew why!).

Her eyes were lighting up now. ”When I got to page 22,” she went on, “and was connecting the wires from control H to the amplifier circuit board, I was feeling a bit crowded. There wasn’t much room to work. I began to worry again. I was afraid things were going to get so congested that I’d make a mistake on which wire went to which hole.

“My fears were for nothing. I found when I’d finished that page that I was through with that kind of work. Hadn’t even broken a fingernail.

“Then I felt a little disappointed. It was kinda fun being able to do such careful work without burning up every- thing around it with the soldering iron.”

Come on, come on, the dial cord.

“Oh that. Well, they sure mean what they say in the directions.”

I tried to conceal a knowing look of masculine superiority.

“It must have taken me 15 minutes all together—getting that little spring hooked, and then doing it over twice. Yes, it took me a while.”

Fifteen minutes! That’s less time than I figured it would’ve taken me, so I brushed on to ask why she had to string it over.

“Well . . . the directions said to wrap it 3-1/2 turns around the knob shaft. To make it reach all the way to the end, I could only get 2-1/2 turns. When I tried to turn it, though, the thing kept slipping. I finally decided that 3-1/2 turns means 3-1/2 turns. By stretching the string and the spring, I got it wrapped 3-1/2. I never should have doubted the directions.”

D-day finally came. The last step had been checked off and I was there for the big moment: plugging it in for the first time. Our housewife tells it better than I do.

“There’s nothing to tell. It just did not work. I’d have been surprised if it had, but I was plenty disappointed that it didn’t. My first thought was: What a lot of work, for nothing.”

Really, it wasn’t as bad as all that. We did the first thing recommended for any circuit-board kit that doesn’t function. We touched a hot soldering iron to every joint on the board. The trouble was merely a cold-solder job on one resistor.

When that radio gave forth music this little housewife tried her best to look nonchalant and unconcerned. She couldn’t hide it, though; she was proud as she could be.

I was going to give it a good alignment job, so it would perform its best. But, except for a touchup of the multi- plex adjustments, there was nothing that needed aligning. Tracking was good, selectivity fine, reception great, and stereo excellent. She insisted on putting it in the cabinet herself.

I checked back when I was putting the finishing touches on this article. She’s still happy with the set. She keeps it in the kitchen and gets a lot of enjoyment from it. I asked her if she’d learned anything about electronics from building her stereo-FM radio.

“Well, I know there are a lot of little parts, and I can identify them by name. But how that conglomeration can actually produce music is more of a mystery to me now than it ever was.”

I asked if she thought she’d enjoy building more kits.

“I haven’t thought too much about it,” she said. “This one was fun, but it took a lot of my time.”