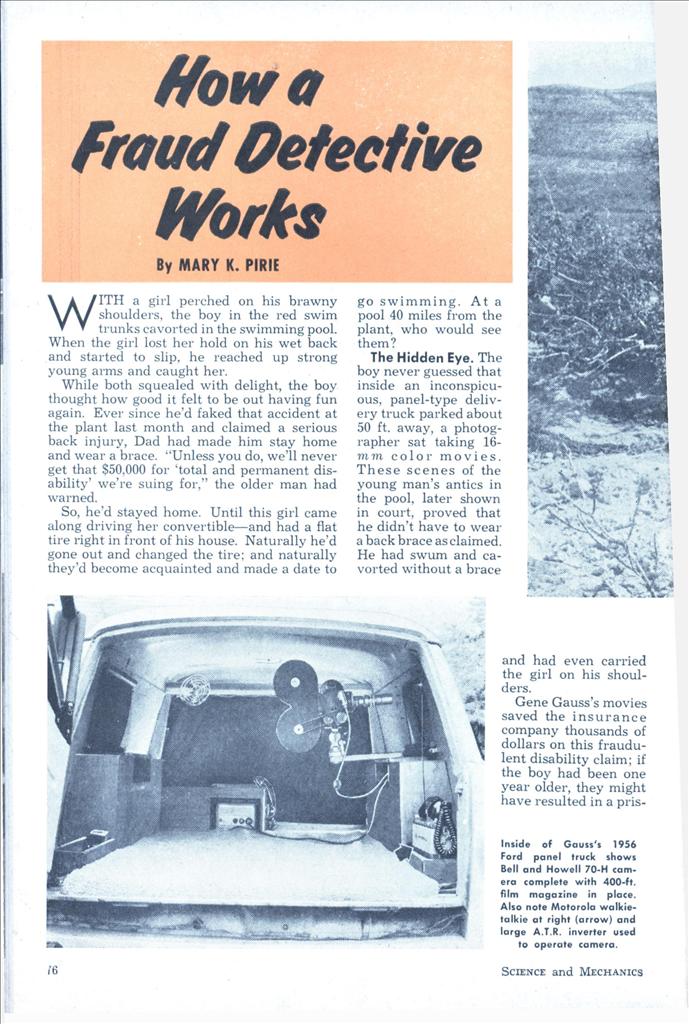 How a Fraud Detective Works

WITH a girl perched on his brawny shoulders, the boy in the red swim trunks cavorted in the swimming pool. When the girl lost her hold on his wet back and started to slip, he reached up strong young arms and caught her.

While both squealed with delight, the boy thought how good it felt to be out having fun again. Ever since he’d faked that accident at the plant last month and claimed a serious back injury, Dad had made him stay home and wear a brace. “Unless you do, we’ll never get that $50,000 for ‘total and permanent disability’ we’re suing for,” the older man had warned.

So, he’d stayed home. Until this girl came along driving her convertible—and had a flat tire right in front of his house. Naturally he’d gone out and changed the tire; and naturally they’d become acquainted and made a date to go swimming. At a pool 40 miles from the plant, who would see them?

The Hidden Eye. The boy never guessed that inside an inconspicuous, panel-type delivery truck parked about 50 ft. away, a photographer sat taking 16-mm color movies. These scenes of the young man’s antics in the pool, later shown in court, proved that he didn’t have to wear a back brace as claimed. He had swum and cavorted without a brace and had even carried the girl on his shoulders.

Gene Gauss’s movies saved the insurance company thousands of dollars on this fraudulent disability claim; if the boy had been one year older, they might have resulted in a prison sentence for perjury. The girl who had been with him at the swimming pool (and on other active-type dates filmed by Gauss) had been hired by the photographer, who holds a detective’s license. The shiny red convertible on which she had such a well-timed flat tire was a rented prop.

This Dallas, Tex., photographer specializes in surveillance film for insurance companies, which hire him to prove or disprove disability claims, especially when medical evidence is inconclusive. Back injuries, for instance, may be claimed—legitimately—which don’t show up by X-ray or other tests.

To take pictures under the adverse conditions peculiar to surveillance work, Gene employs a variety of unusual equipment, some of which he originated or built. There’s his 1956 Ford panel truck. Outside, it looks like a somewhat bedraggled delivery truck, except that it has a 10 x 20-in. mirror on each side and another mirror at the back. Sometimes high school girls stop by the parked vehicle to powder their noses, giggling to each other, “Must be a funny guy, to want mirrors outside.” They don’t know that the mirrors are of one-way glass, allowing Gauss to sit inside the truck and see without being seen while he shoots moving pictures.

It’s Different Inside. The truck’s interior is equipped for taking movies in black-and-white or color, using 400-ft. Bell and Howell model 70-H electric cameras powered by a 150-watt A.T.R. inverter.

Gauss likes color for its value in identifying disability claimants. A man with flaming red hair, for instance, can scarcely deny his identity in a color movie of himself at work. Even as far away as a half-mile, Gauss shoots color successfully, using lenses as long as 1000 mm Focal length. With such extremely long lenses, he has to use a reflex type of camera in order to view through the taking lens while it is actually in use.

A carpenter claimed that his right hand had been injured so badly he no longer could hold a hammer to drive nails. Gene went to where the man was busy on a construction job, introduced himself as representing a trade magazine and asked permission to take pictures. The carpenter—apparently warned to watch out for photographers—merely limped around watching the job, but taking no active part while Gene shot his pictures. Soon Gene said goodby, drove off to a spot which he had marked out as offering concealment for his panel truck, parked—and waited for the “disabled” carpenter to begin hammering. Then Gene went to work—using a camera of his own design and building, a 16-mm army surplus G.S.A.P. 24-volt electric magazine-load gun camera, mounted on a Bishop rifle stock. It used a 9-in. Century lens, with a Weaver G.4 rifle ‘scope for a viewfinder. (For this type of work, Gauss now uses the Eastman K-100 camera because of its lengthy 40-ft. film run.) Claims Reduced. Movies Gene shot that day later reduced the carpenter’s claim from “total” to “partial” disability—saving Gene’s client a lot of money. As often happens, this man actually had sustained injury, but he was greatly exaggerating his disability. Gene’s objective is not to prove all claims fraudulent, but simply to arrive at the facts. “We try to be fair and impartial,” he says. “In 90% of the claims we investigate for insurance companies, however, pictures prove some degree of fraud.”

Using his gun camera, Gene shot color movie film from a truck parked 600 ft. from a Texas oil rig where a man was working as a roughneck, though he claimed “total and permanent disability.”

In another case, a steelworker claimed that because of an injury he couldn’t get off the ground—and sued for $40,000. Gene shot movies of this fellow working on the fifth floor of a construction job. From several blocks away Gene filmed a man roofing his house, who was supposed to be bedfast under an oxygen tent.

In addition to photographic skill and top-quality equipment, surveillance work calls for plenty of ingenuity. To get movies of a “disabled” man bowling, Gene sat concealed with the pin boys. (He used the 16-mm Bolex and a 2-in. Bell and Howell /1.4, shooting with existing light.) For movies of the same fellow roller-skating, he hid in the woods just behind a roller-skating rink and shot through an open back window.

Since the only lights were a few bare bulbs in the rink, he used f1.4 Bell and Howell lenses and the high-speed DuPont type 931 film.

A Self-Taught Photographer and “detective” (Gene smiles at the latter term, saying his operations hardly require the detective’s license he holds), Gene Gauss was originally a senior machinist operating his own auto repair shop. A liking for adventure caused him to drive a wrecker, and, being a keen amateur photographer, he began taking pictures of the wrecks for the sheriff’s department. (He still does this as a minor part of his business.) Insurance companies soon were asking for wreck photos, then for pictures in disability-claim cases. From stills, he went on in 1942 to movies, which so convincingly prove a claimant’s ability to work. He now has a great variety of equipment, valued at $50,000, including two-way radios and walkie-talkies with their own radio frequency, assigned to him by the Federal Communications Commission. When Gene and his operatives communicate from car to car by walkie-talkie, this frequency is unlikely to be picked up by others. Says Gauss, ‘”We’re permitted—and equipped—to use the sheriff’s radio frequency, because our service includes taking pictures of accident and crime scenes. But we avoid abusing the privilege.”

Constant Communication. Besides the panel truck, which has two-way radio and other special radio equipment, Gene owns a new Cadillac equipped with a Motorola radio on his own frequency. This enables Gene and his operators to talk directly to his wife, Mary, in the office at any time. They also can talk from car to car. His entire fleet of automobiles is equipped with radios on this frequency.

In the course of a day, Gauss and his operatives sometimes use several cars to follow one man. “Perhaps, from his home, we trail him to his job—this being the only way we can find out where he’s working, since he claims inability to work anywhere! It may take several cars, communicating by two-way radio and changing positions frequently, to do this shadowing job without arousing the man’s suspicions.”

To save expensive upkeep and to prevent the cars from becoming identified, Gauss rents extras as needed. As another means of cutting down overhead, he employs operatives on a part-time basis. In addition to Gene himself, the only full-time workers are his wife, who runs the Dallas office, and three technicians to handle the printing of still’ photographs. Both the Gausses often work 14 hours a day.

Especially on surveillance jobs out in the country, Gauss often takes aerial photographs beforehand to get the lay of the land, and he also takes aerial photographs of crime and accident scenes (crime, for the sheriff’s department; accident, usually for insurance companies and other litigants). He owns and pilots a five-place Cessna 195. Mary, who also holds a private pilot’s license with single-engine land rating, often pilots the plane for Gene’s aerial picture-taking.

To Cut Down the Expense of a business that requires a costly range of equipment— and because he enjoys tinkering—Gene originates or builds much equipment, especially photographic gear. He designed and built his gun cameras and his entire photo lab. Fabricating fiber glass over sinks in the print lab and in the film-processing room, he built, for $50, two 6-ft. sinks which would have cost at least $150 in stainless steel.

Gauss also designs concealed camera equipment which he uses to catch burglars and prowlers. Example: “For a wealthy home which had been burglarized five times, we built a soundproof box to sit in a head-of-the- bed bookcase, disguising it with strips cut from the back covers of books to make it look like the real volumes among which it was placed. With this camera set to operate automatically whenever anyone entered the room, we got movies that enabled the police to identify and catch the criminal.

“Every time we turn around, we have to build something,” comments Gene. “But in addition to saving us money, that’s part of the fun of this business. For instance, we have designed and built all types of special camera mounts to hang on the side of a car door or a dashboard; this enables us to use the long telephoto lenses without a tripod.”

Financial Returns on surveillance photography? “That depends on the amount of time and energy you’re willing to put in,” says Gene. “We shoot approximately 100,000 ft. of surveillance film a year, traveling about 70,-000 miles, driving in and around Dallas and in 48 states, to do it. I’d hate to tell you how many hours Mary and I work each year. On a case, our fees from an insurance company may range all the way from $50 to several thousand dollars.

“In general, I’d say that a photographer who doesn’t mind hard work and shooting under highly adverse conditions—who in addition to technical ability has enough ingenuity to figure out new ways of getting the picture—should make a good living.