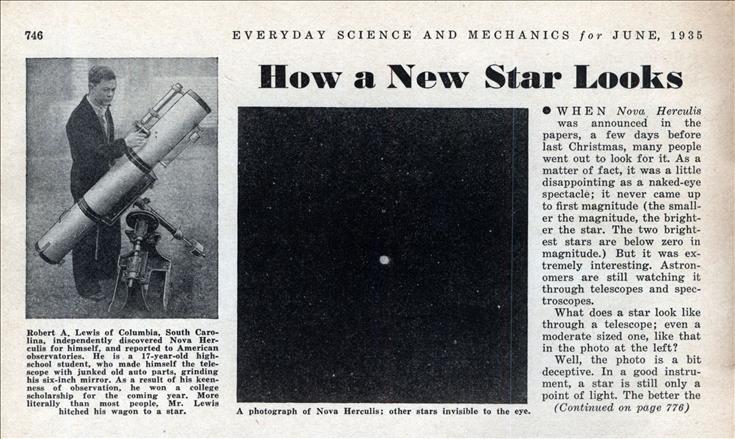 How a New Star Looks

WHEN Nova Herculis was announced in the papers, a few days before last Christmas, many people went out to look for it. As a matter of fact, it was a little disappointing as a naked-eye spectacle; it never came up to first magnitude (the smaller the magnitude, the brighter the star. The two brightest stars are below zero in magnitude.) But it was extremely interesting. Astronomers are still watching it through telescopes and spectroscopes.

What does a star look like through a telescope; even a moderate sized one, like that in the photo at the left?

Well, the photo is a bit deceptive. In a good instrument, a star is still only a point of light. The better the telescope, and the better seeing conditions, the smaller the star. Its brightness increases; but not its apparent size. A comet or a planet, on the other hand, can be magnified. In the eastern sky we have the planet Mars and the star Arcturus, in the early evening. They look alike to the eye; but a telescope makes Mars spread out, bigger and bigger, perhaps till it looks as big as the head of a lead pencil. Arcturus remains simply a point of yellow light; because, while Arcturus is millions of miles across, it is trillions of miles away.

Therefore, when we see Nova Herculis in the photograph as a spot about 1/12″ across, we know it is simply because the plate has been fogged a little around the bright star; while the smaller stars—all too small to be seen by the naked eye— produce spots large or small in proportion to their brightness. The longer a plate is left in the camera of a telescope, the larger all the stars appear on it, and the more of the dim ones appear on the plate. Stars a hundred thousand times too dim to be seen by the eye can be photographed with big instruments.

Because of the brightness of these points of light, it is impossible to measure their apparent diameter in a telescope, or on a photograph; but by an instrument called the interferometer, which brings together two images of the same star to form “fringes” of light, it is possible to measure the diameters of some of our largest “near neighbors” when they run into millions of miles. Such figures, roughly, confirm calculations as to the probable sizes of these stars, in order that they may seem as bright to us as they do. They run from about 300,000,000 miles in diameter down. Since Nova Herculis (as explained in our last issue) blew off a great cloud of hot white material, it is hoped that this may continue expanding until we can see it separate from the star—as a “ring nebula,” like a puff of smoke, with the star in the center. Such objects are known in the heavens; but the explosion must get a great many billion miles away from the star before the smoke puff can be seen separately.