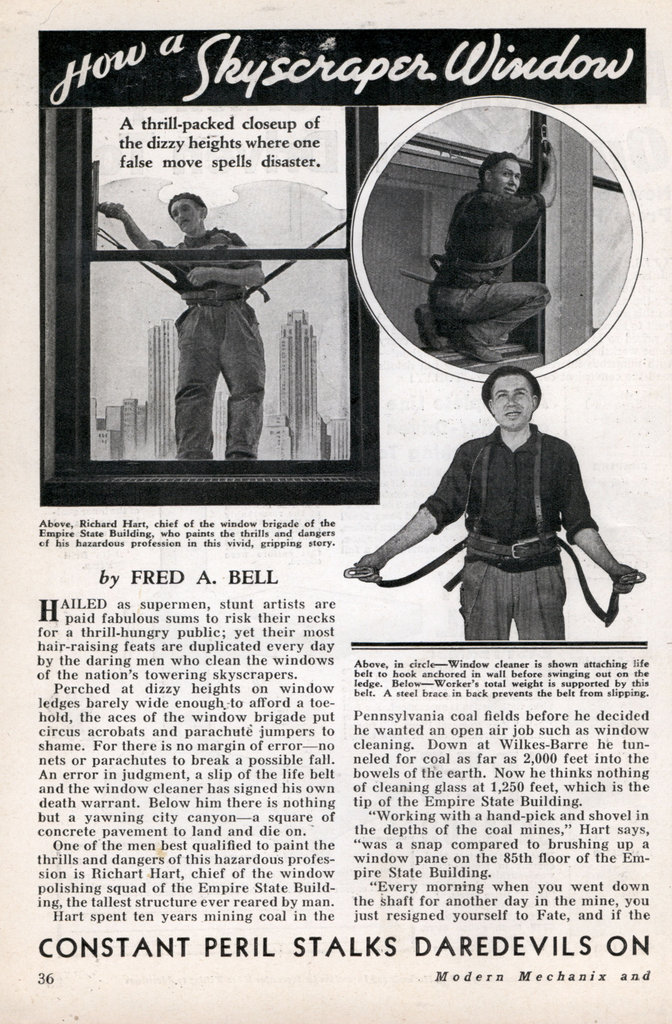 by FRED A. BELL

HAILED as supermen, stunt artists are paid fabulous sums to risk their necks for a thrill-hungry public; yet their most hair-raising feats are duplicated every day by the daring men who clean the windows of the nation’s towering skyscrapers.

Perched at dizzy heights on window ledges barely wide enough to afford a toehold, the aces of the window brigade put circus acrobats and parachute jumpers to shame. For there is no margin of errorâ€”no nets or parachutes to break a possible fall. An error in judgment, a slip of the life belt and the window cleaner has signed his own death warrant. Below him there is nothing but a yawning city canyonâ€”a square of concrete pavement to land and die on.

One of the men best qualified to paint the thrills and dangers of this hazardous profession is Richart Hart, chief of the window polishing squad of the Empire State Building, the tallest structure ever reared by man.

Hart spent ten years mining coal in the Pennsylvania coal fields before he decided he wanted an open air job such as window cleaning. Down at Wilkes-Barre he tunneled for coal as far as 2,000 feet into the bowels of the earth. Now he thinks nothing of cleaning glass at 1,250 feet, which is the tip of the Empire State Building.

“Working with a hand-pick and shovel in the depths of the coal mines,” Hart says, “was a snap compared to brushing up a window pane on the 85th floor of the Empire State Building.

“Every morning when you went down the shaft for another day in the mine, you just resigned yourself to Fate, and if the heaviside layer of coal and rock was going to crumble over you that day, well, you figured there was nothing you could do about it anyway. It was just bound to happen.

“Now with the sparrowsâ€”that’s what they nickname us because “we can perch anywhereâ€”it’s different, You can be the master of your own fate by being careful and alert. There’s no reason for feeling it’s the end every day.”

“We have our own window cleaning department in the Empire State Building. Three years ago I had close to fifty men under me; but it’s been a case of the survival of the fittest, until today I have just eight. But they don’t come any better. They’re hand-picked men and crackerjacks at their trade. I don’t mean that their former comrades have kicked the bucket. They’ve just wandered off to other jobs where the knees don’t get jittery from prancing around at dizzy heights.

“Last year one of my best window-cleaners decided to quit. He was 65 years old, had been in the business 41 years and wanted a rest. The other day 1 ran into him and he told me that he missed the work and had gone back to polishing panes. I guess the heights get in your blood after a while and you can’t stand what some folks call terra firma.

“The men folks who squawk when they have to clean a dozen windows in their homes will get some idea what a job we have when I say we have to keep 6,500 windows looking spick and span. We have to work fast, too, because there’s a lot of prejudice among office folks when the window cleaner barges in. Yet there’s a lot of fuss made if the windows don’t get prompt attention. So we’re always in the middle no matter how you look at it.

“The eight men are divided in teams of two. Each team is responsible for 25 floors. Those who finish first have the reward of doing the upper stories which run up to the 102d floor. Then if they have done a good job I always let them have a little time on the Observation Tower, taking in some of the sights they don’t dare peek at while they’re minding their business.

“The mainstay of the window cleaner is his life belt. This is made of leather and goes around his midsection. It is very thick and each end hitches to a steel hook which protrudes from the side of the window where he is working. If one end of the belt should lose its grip, he would still be held by the other end. The steel brace in the back of the belt is so constructed that the leather cannot slip through it.

“We never work on rainy days. As a matter of fact, we take it easy in all kinds of stormy weather. The risk would be too great when a blizzard is raging. It’s bad enough on the streets in the skyscraper zone to say nothing of bucking the arctic gales 100 stories high and trying to put a shine on a window.

“Our jobs are most dangerous in the winter time, of course. The sills of the Empire State Building windows have a one and one-half inch margin. Look at your shoe and try to mark off one and one-half inches and then you realize what a window cleaner’s foothold must be 60 or 80 stories high.

“To give you some idea of the hazards of this business, let me picture the window cleaner’s problem on a cold winter morning. He goes to the 80th floor for work. The window is probably jammed because of the ice and cold. The sill on which he is to place his feet is sheathed in ice. He’s got to get out on that perch. No wasting of time to chip off or melt the ice. He’s got to make speed.

“His mind must be off danger. The mental hazard would lick him from the start if he gave in to it. He must remember that the first thing to do on opening the windowâ€” after he has securely adjusted the life belt to his bodyâ€”is, to hook up one end of the belt to the window. Then he can step out and quickly attach his belt to the other hook.

“He must not unhook the second snap on his belt until he has placed his foot safely within the interior after finishing the job.

“The closest shave I ever had was while cleaning windows in a university which had classrooms in a skyscraper here. The idea was to have the windows cleaned during the fifteen minutes between class periods.

“I had finished one set of windows and was in a hurry to get to the next classroom. Instead of unhooking my belt and going all the way around, I decided on a short cut. I unhooked the belt and proceeded along a wall ledge, about eight feet long and six inches wide, carrying a pail and a ladder.

Death Hangs in the Balance

“Just as I got to the middle, I began to wobble. My toe-hold was failing. I had allowed one foot to get out a little too far, just enough to upset my balance. I stood still, or tried to. I teetered a little but I kept calm. I was facing the building wall, trying to hug it with my body. I glanced down over my shoulder and saw a cop standing below. There was nothing he could do. I was ten stories up, and on the verge of falling.

“In the end I managed to regain my balance and my hold. I wormed my way over to the next window and went right on with my job as if nothing had happened. That’s the worst jam I was ever in. That might have been the one fall allotted meâ€”and fatal!

“There is a standing army of 3,000 window cleaners in New York.City, and it’s my guess that we have the biggest mortality rate of any working class in the world. Most insurance companies won’t have anything to do with us. We’re marked ‘V. P. R.’â€”very poor risk.

“The average window cleaner gets $30 weekly for 48 hours under the NRA. Aside from the perils, it’s nice, clean, healthy outdoor work, and we have very little labor trouble. You see, this is one trade in which there are no strikebreakers.

“When a man applies to me for a job, I don’t listen to any hot air about how good he is. I hand him the equipment, take him to the 100th floor, show him what a swell sight it is, to see all the other big skyscrapers sprawled out below, and then I say, ‘Okay, my man, go to it. Tackle that window right there.’

“I’ve never seen it fail. If they’re not full-fledged window cleaners they quit right on the spot. It takes a lot of nerve to step out into space, 100 stories up, if you’re not made for it.

“I’m forty years old and like my job very much. We’re all a happy-go-lucky bunch and sleep a good ten hours every night. We eat lightly. You’ve got to. On Sundays we have a feast, however. I’ve got a son, 15, and he’s going to be an engineer. He says he doesn’t care much for the wide open spaces where his old man works. Well, maybe I can’t blame him after all for not wanting to lead a sparrow’s life.”