For some reason the idea of a tooth transplant creeps me out way more than a blood transfusion or even and organ transplant. 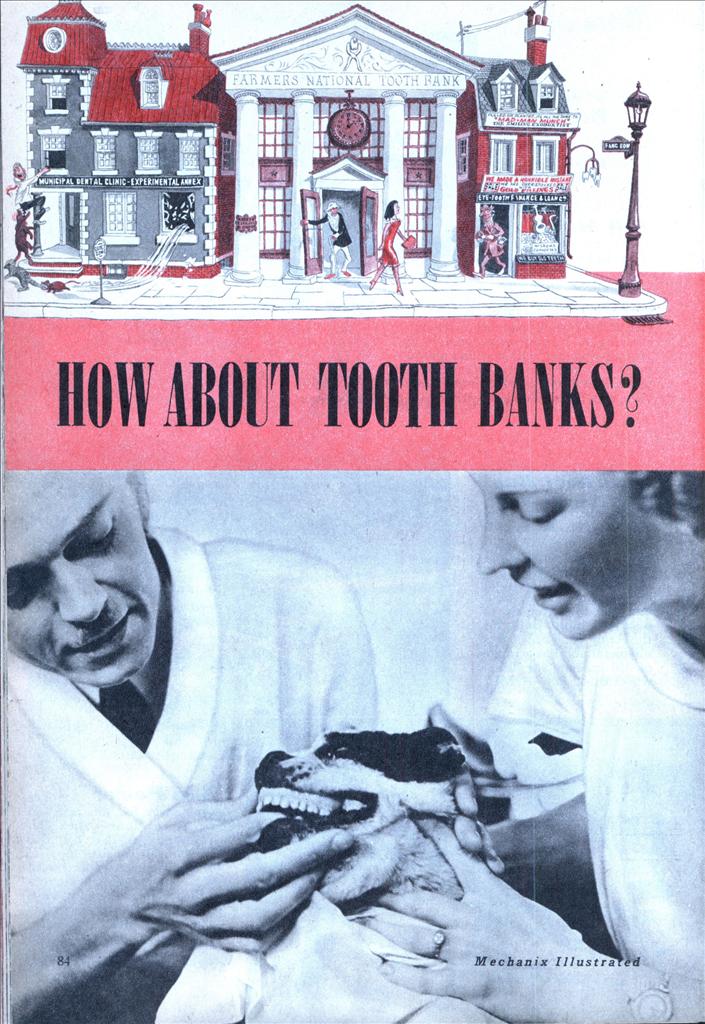 HOW ABOUT TOOTH BANKS?

Dental scientists are working on a new boon to mankindâ€”the transplantation of live teeth.

Dentist gives him the needle, inserts forceps, yanks mightily. He throws away old tooth and goes to cabinet for new one. He selects nice, shiny molar from collection, plants it in patient’s mouth and sends him on his way.

About a month or so later, new tooth has established nerve, bone and blood vessel connections with jaw and happy patient has a live, serviceable chomper in his head to replace the one extracted.

The tooth bank for humans admittedly is still a scientific will-o-the-wisp, but rapid strides are now being made in the right direction. Much more has yet to be learned about bone regeneration, blood vessel regeneration and developing of tooth structure but the lights are burning high and late in the laboratories as doctors work to push back this latest of frontiers.

They are convinced that eventually they will succeed, and with success will come one of the greatest boons to mankind. Picture the possibilities: Into the junkpile will go all artificial dentures, all bridges, plates, partial plates. All men and women of whatever age will be able to have human teeth imbedded inside their gums until the day they die.

Far-reaching experiments in this direction have been performed by Dr. Harry H. Shapiro of Columbia University who has had notable success in laboratory tests with cats. Here’s what he did in 14 separate instances with favorable results: He removed a tooth, painlessly, from the jaw of an anesthetized “host” cat after careful study of X-rays of the area. Then, in an extremely delicate operation, he extracted a developing tooth from a “donor” cat. (Cruelty to animals? Permit us to say here: Let anyone who raises this cry put himself in the position someday of requiring a new set of choppers. If science, with the aid of a cat, can give him live teeth instead of false ones, he’ll no doubt shift his concern from the animal to the human being.) Third step was to graft the new tooth into the socket of the host cat. In cases where the donor tooth was not injured during transplantation, it developed and grew normally.

Dr. Shapiro selected cats for his experiments because the growth cycle of their teeth is most like that in humans and proceeds so rapidly that results can be observed fairly soon. A kitten, just like a human baby, is born toothless, then gets a set of “baby” teeth which soon fall out and are replaced by a second, permanent set.

When the problem of tooth transplantation in humans is finally solved, the new teeth may be put into sockets either in the form of fully-grown molars or “germ” teeth (teeth which have only begun to grow). In the latter case, they can be kept indefinitely in a dentist’s office by freezing.

While foreseeable, tooth banks are not here yet. Dr. Shapiro emphasizes the point by telling of a letter he received recently from a man in California who had read of his researches. The man asked for several teeth to replace those he lost in an accident and pointed out he was especially anxious to receive “a couple of molars by return mail.”

Dr. Shapiro wrote back: “Sorry, it will be some time before we open for business.”