“two panoramic additions to the Seven Hills of Rome” is my new favorite euphemism for breasts. 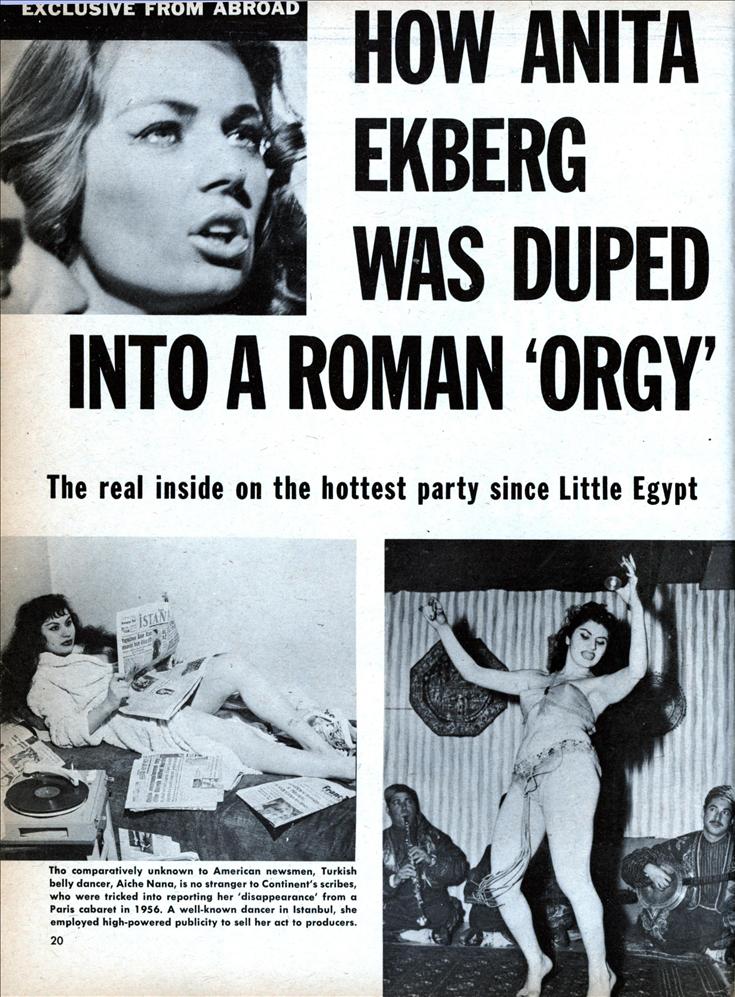 The real inside on the hottest party since Little Egypt

Now, INSIDE STORY can reveal, for the first time anywhere, that in the case of the Too-Hot Party, Anita wasn’t trying to make the front pages with a sexy gimmick—even though the raid was a publicity stunt!

It was the biggest and hottest publicity gimmick Rome had seen since Nero’s press agents made the world believe the Emperor fiddled while flames devoured the town.

But Anita had nothing to do with calling in the cops and cameramen. The INSIDE STORY of the Roman wing-ding is that the Swedish smorgasbord was duped, tricked, up-staged, out-sexed and out-smarted by a Turkish delight.

She was forced to play second-fiddle while a Turkish belly-dancer burned up the joint.

The belly ballet was staged by a comparatively unknown stripper who, like Anita, subscribes to the old show biz motto: “I don’t care what you say about me, only spell the name right.” In the case of the torrid Turk, however, the news boys didn’t even do that.

Her name appeared in print as Kiash Nanah, Haisch Nanah, Nana Kaish and Aiche Nana. And the Rome police blotter carried two different spellings. In any event, she is now known as the Naked Nanah.

The event which made her serpentine form a Roman spectacular took place November 6, 1958, in a small-time sucker trap—the Rugantino—in the Trastevere district, Rome’s working class quarter. American society playboy Peter Howard had rented the joint for the night to throw a party celebrating the 25th birthday of Countess Olghina Di Robilant.

So far as Howard and most of his guests knew, it was a private party. The front door was locked. The press was barred. But somebody left the rear door open and saw that Rome’s tabloid newspapers and magazines were tipped off well in advance to expect fireworks.

Though Howard was footing the bill, Nanah’s agent suggested to the club owner that some things are worth more than money. Publicity, for instance. The kind that money can’t buy. The kind that would make the rundown Rugantino more famous than all the ultra-swank night spots along the glittering Via Veneto. And the club owner swallowed the bait.

The Naked Nanah planned to go into her act around midnight. Then, before she could reach for a zipper, she got an unexpected assist from La Ekberg, who was full of grape and excess energy.

In the midst of a torrid Cha Cha Cha, performed without benefit of escort, Anita started coming out of her form-hugging black gown like a snake shedding its skin. Her zipper and shoulder strap burst simultaneously, revealing two panoramic additions to the Seven Hills of Rome. And, like they say at ringside, the crowd went wild.

At this point, there was no longer any need for Nanah to warm up her audience. The small club already was super-heated by the thawing Swedish Iceberg. All Nanah had to do was fan the flames.

Nanah’s agent and the club owner called the cops and let the reporters and photographers in. As flashbulbs started popping, the belly-bouncer leaped to the center of the dance floor, stole the spotlight from wornout and overexposed Anita, and began gyrating as she had never gyrated before.

First she flicked a zipper down the side of her white evening gown. Then, as the dress floated cloudlike to the floor, she stepped out of her spike-heeled shoes. Her tummy tumbled like a Tums commercial and her hands did a butterfly dance above and around her throbbing breasts.

True to the ageless art of the belly-twirler, Nanah had planned to hold the boys in a spell of ever-mounting suspense until the police provided a headline – producing climax. But Anita’s preliminary peep show had aroused the princes, counts and play-boys to the point of no return.

Before Nanah could stop them, a strong hand helped her unfasten her flimsy brassiere and other hands clawed at her sheer, black lace panties and dusky undulating thighs. Still whirling like a hopped-up dervish, she dropped to her knees and hoped that her panties would hold. Then somebody tore them off, too.

It was then that the poliziotti arrived, stopped the show, closed the joint and, after placing the Turkish twirler under wraps, booked her for public obscenity. The charge was more than Nanah had bargained for when she plotted her publicity scoop. Tearfully, she told police and reporters that the strip-tease was not her fault. She said someone pulled down her zipper and other helping hands finished the job.

Police were not impressed by her story. Particularly as the good citizens of Rome next day savored the hottest Expresso in local history. Expresso, a tabloid weekly, published two full pages of strip shots, showing how she wiggled down to the bare facts. The photos showed she had plenty of assistance, but the strip sequence was her own idea to begin with. Copies of the magazine were confiscated by police, but not before thousands were sold.

The Vatican City newspaper Osservatore Romano branded the party guests “society lice” and suggested that Anita, Howard, Nanah and all other foreigners at the raided revel should be kicked out of Italy. Howard, a remote relative of the Vanderbilt clan, and Nanah subsequently got the official Italian boot and left, separately, for Paris.

“I like Italians,” Nanah said. “They have hot blood like the Turks. But it is better to live in Paris where the strip tease is permissible.”

Sophisticated Parisians remembered her from the many times she had stripped in Left Bank cafes and from another publicity stunt—the time in 1956 when newspapers reported she had vanished mysteriously after writing a single word on a paper in her dressing room: “Farewell.” All French police were alerted and, at the height of the publicity, Nanah reappeared in as good shape as before.

Though Anita lost the limelight to the Naked Nanah, she came right back with a publicity twist of her own. A repetition of her sizzling Cha Cha Cha. But this time she did her dance in broad daylight on the crowded Via Veneto, after making sure no sultry strippers were lurking in the wings to steal the show.