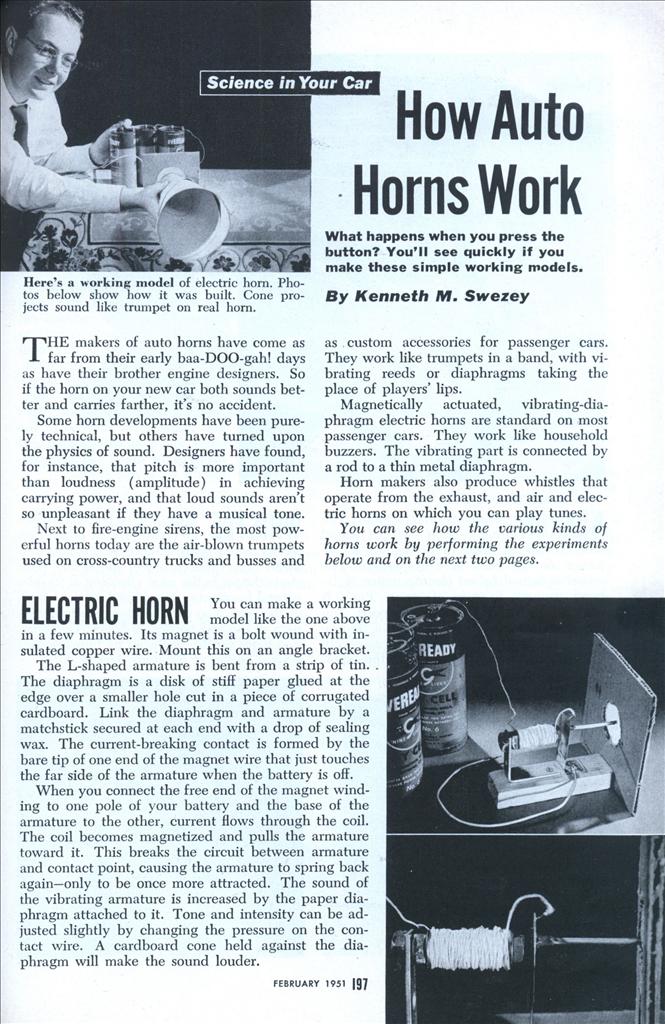 What happens when you press the button? You’ll see quickly if you make these simple working models.

THE makers of auto horns have come as far from their early baa-DOO-gah! days as have their brother engine designers. So if the horn on your new car both sounds better and carries farther, it’s no accident.

Some horn developments have been purely technical, but others have turned upon the physics of sound. Designers have found, for instance, that pitch is more important than loudness (amplitude) in achieving carrying power, and that loud sounds aren’t so unpleasant if they have a musical tone.

Next to fire-engine sirens, the most powerful horns today are the air-blown trumpets used on cross-country trucks and busses and as custom accessories for passenger cars. They work like trumpets in a band, with vibrating reeds or diaphragms taking the place of players’ lips.

Magnetically actuated, vibrating-diaphragm electric horns are standard on most passenger cars. They work like household buzzers. The vibrating part is connected by a rod to a thin metal diaphragm.

Horn makers also produce whistles that operate from the exhaust, and air and electric horns on which you can play tunes.

You can see how the various kinds of horns work by performing the experiments below and on the next two pages.

You can make a working model like the one above in a few minutes. Its magnet is a bolt wound with insulated copper wire. Mount this on an angle bracket.

The L-shaped armature is bent from a strip of tin. The diaphragm is a disk of stiff paper glued at the edge over a smaller hole cut in a piece of corrugated cardboard. Link the diaphragm and armature by a matchstick secured at each end with a drop of sealing wax. The current-breaking contact is formed by the bare tip of one end of the magnet wire that just touches the far side of the armature when the battery is off.

When you connect the free end of the magnet winding to one pole of your battery and the base of the armature to the other, current flows through the coil. The coil becomes magnetized and pulls the armature toward it. This breaks the circuit between armature and contact point, causing the armature to spring back again—only to be once more attracted. The sound of the vibrating armature is increased by the paper diaphragm attached to it. Tone and intensity can be adjusted slightly by changing the pressure on the contact wire. A cardboard cone held against the diaphragm will make the sound louder.

This variety produces a sound in much the same way that a tin horn or your vocal cords do. The old honk-honking horns depended upon a thin metal reed that vibrated strongly when you squeezed the bulb. Some present-day musical horns work on the same principle. More powerful air horns depend upon the vibration of a diaphragm against the end of a trumpet.

You can make a workable vibrating-reed horn from a soda straw. Flatten one end and cut about 1/4″ from each corner as shown in the diagram. Put about 2″ of this end into your mouth. Then blow. Shorten the straw and you will raise the pitch. Add funnels of different sizes and shapes over the end of the straw and you will change and magnify the sound just as trumpets do on a real horn.

Horns of this famous type make their OOgah sound when a studded wheel rotates against a projection on the back of a diaphragm. The wheel is turned by an electric motor or by hand through a train of gears. Pitch is changed by varying the wheel speed. You can make a model by cementing a thumbtack to the center of the bottom of an empty salt box, and rubbing a file over the point.

Whistle-type horns work like an organ pipe. A blast of air passes over a sharp edge near one end of a metal pipe. The turbulent air at the edge starts the air in the pipe vibrating at its own natural frequency, determined by the length of the pipe. You can test this principle with soda straws and bottles, as below. Combination tones can be produced by blowing over several bottles of different sizes at once.

Now often restricted to fire engines, ambulances, police cars, and air-raid warnings, a siren produces its characteristic scream by intermittent puffs of air issuing through holes in a revolving drum or disk. A simple model will show how it works. Punch a circle of equally spaced holes near the edge of a coffee-can cover. Mount the cover on the shaft of a small grindstone or fasten it in the chuck of a hand drill. Blow through the holes with a straw, flattened at the nozzle end, as you turn the disk. The harder you blow, the louder; the faster you turn, the higher the pitch.

Commercial sirens usually consist of a metal drum with slots in the periphery. This revolves inside a slotted stationary drum. A fan attached to the rotating drum sucks in air at the axis and hurls it out the slots.

How sound waves are intensified by the use of a trumpet can be shown visually with a candle and a tin can. Remove the top from the can, hold the top a little more than the can’s length from the candle, and snap the top with your finger. The candle doesn’t flicker. Now hold the mouth of the empty can near the candle, and snap the bottom of it. This time the sound waves, aimed by the can, disturb the candle flame noticeably.