Modern Mechanix
Issue: Jun, 1930
Posted in: How to
9 Comments on How Carnival Games Cheat Customers (Jun, 1930)

If you liked this (minus all the games with racist titles) be sure to check out these articles:
How Carnival Racketeers Fleece the Public
Why You Canâ€™t Ring Bell of â€œHigh Strikerâ€
STRANGE INVENTIONS used by Crooked Gamblers
Machines that Pick Your Pocket – AND MAKE YOU LIKE IT! 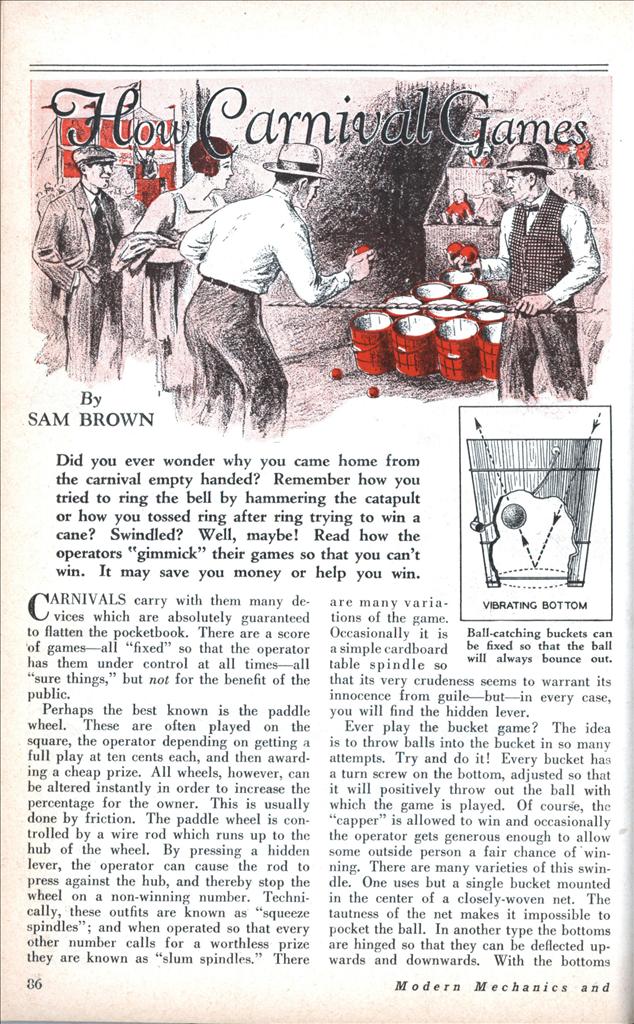 Did you ever wonder why you came home from the carnival empty handed? Remember how you tried to ring the bell by hammering the catapult or how you tossed ring after ring trying to win a cane? Swindled? Well, maybe! Read how the operators “gimmick” their games so that you can’t win. It may save you money or help you win.

CARNIVALS carry with them many devices which are absolutely guaranteed to flatten the pocketbook. There are a score of gamesâ€”all “fixed” so that the operator has them under control at all timesâ€”all “sure things,” but not for the benefit of the public.

Perhaps the best known is the paddle wheel. These are often played on the square, the operator depending on getting a full play at ten cents each, and then awarding a cheap prize. All wheels, however, can be altered instantly in order to increase the percentage for the owner. This is usually done by friction. The paddle wheel is controlled by a wire rod which runs up to the hub of the wheel. By pressing a hidden lever, the operator can cause the rod to press against the hub, and thereby stop the wheel on a non-winning number. Technically, these outfits are known as “squeeze spindles”; and when operated so that every other number calls for a worthless prize they are known as “slum spindles.” There are many variations of the game. Occasionally it is a simple cardboard table spindle so that its very crudeness seems to warrant its innocence from guileâ€”butâ€”in every case, you will find the hidden lever.

Ever play the bucket game? The idea is to throw balls into the bucket in so many attempts. Try and do it! Every bucket has a turn screw on the bottom, adjusted so that it will positively throw out the ball with which the game is played. Of course, the “capper” is allowed to win and occasionally the operator gets generous enough to allow some outside person a fair chance of “winning. There are many varieties of this swindle. One uses but a single bucket mounted in the center of a closely-woven net. The tautness of the net makes it impossible to pocket the ball. In another type the bottoms are hinged so that they can be deflected upwards and downwards. With the bottoms flat, the player has no chance whatsoever, but by pressing a lever, the “barker” can deflect the bottoms slightly, causing the ball to strike the inside on the rebound and then stay put.

Another game “gimmicked” is the hoop toss. In this, the prizes are mounted on square pedestals. The player is furnished with wooden rings somewhat like crochet hoops, and with these he attempts to win by completely “ringing” the pedestal. Of course, he has no trouble in eventually winning one of the “slum” prizes, but it is next to impossible to ring any of the more pretentious gifts. The reason is simple. The rings are slightly elliptic in shape, so that their smaller diameter is just the least bit lacking. The operator pressing the ring to a more rounded fullness between his thumb and fingers, easily slips it over the prize in question.

Of all games “spot it” is one of the few that is actually played “on the square.” It is quite simple. The operator presides over a large disk painted on top of a small table. You are handed five smaller disks and attempt to completely cover the large disk. The disks cannot be moved once they are placed in position.

It’s simpleâ€”the operator shows you how. But when you try . . . always there is that little bit of uncovered space peeping up at you . . . laughing! Of course, there is no “gimmick” in the game. The basic principle is one of geometry. There is only one way in which the small disks can be placed to completely cover the large disk. Any deflection will result in failure. The “barker” has certain marks on the large disk, discernible only to himself, which guide him in covering the disk completely.

There is nothing so sure, for the operator, as the ball and box outfit. In this one the operator exhibits a box in which are numbered balls. Corresponding to the numbers is the prize rackâ€”a “slum” affair displaying valuable and worthless prizes. You buy a chance and the operator opens a small door in the box and lets out your ball. You immediately spy the number and turn eager eyes towards the prizes to see what you have won. It invariably happens that you have drawn a non-winning ball.

J The nigger in the woodpile is that the balls are of two different sizes. The non-winning balls are the smaller size. The game revolves around one point, as far as the operator is concerned. If he can release these smaller, non-winning balls, the company is ahead. Well, he does! The method is absurdly simple. To the inside of the box is fastened a block of wood. The small balls will slide under it, but the larger balls cannot. When the barker shakes the box, he waits until he feels a ball striking the tin door. This he knows to be a non-winning ball and he releases it at once. When business is good the operator subtly contrives to allow a player to win occasionally, and in this manner spurs on doubting spectators.

Another popular game is the “Test Your Strength” device in which a lever, when struck by a hammer, catapults a rubber marker up a steel wire. Actually, physical strength has nothing to do with itâ€”a girl can send the marker to the top while the “village blacksmith” might hammer all day and never reach the top. The reason is that by resting his foot on a lever the operator can make the wire taut or loose as he desires. Therein lies the secret. When the wire is tight, the marker goes crashing into the bell; but when the wire is loose, it encounters enough friction to retard it.

Even the “toss a ring and win a cane” game and the lesser-known “knife pitch” are tricked. The faking is in the ring, this being weighted on one side so that it will fall at an angle. The better prizes, too, are usually packed so close that it is impossible for the ring to encompass any one of them.

Other simple games come in for their share too. The cats and the squat bottles that you throw baseballs at are often loaded so that they can withstand a terrific impact and still remain standing. The grinning “nigger babies” have been hammered so consistently in previous seasons that they present a total solid area of about three square inches, the rest consisting of gaudy edging through’ which the ball whizzes without effect.

The “drop case” too is quite popular. The carnival uses it as a “slum” affair, one-half pi the numbers winning. You drop your marble in at the top of the case and allow it to roll down through the maze of small pegs. At the end it drops into a numbered stall and it is not unusual for it to land consistently on the non-winning numbers. A concealed lever does it. By giving it a turn the operator erects a barrier in front of winning numbers.

The “pin and ball” outfit consists of a bowling pin over which is suspended a ball on a long rope. The idea is to swing the ball forward, miss the pin, and then knock it down on the reswing. By twisting the rope or through loose uprights you will always lose.