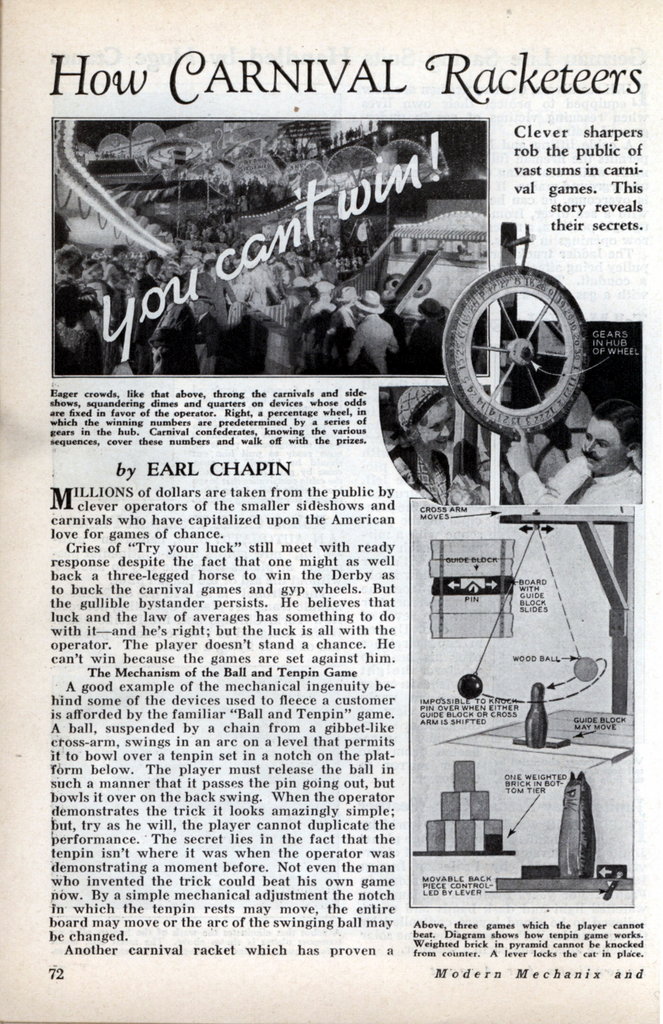 How Carnival Racketeers Fleece the Public
by EARL CHAPIN
MILLIONS of dollars are taken from the public by clever operators of the smaller sideshows and carnivals who have capitalized upon the American love for games of chance.
Cries of “Try your luck” still meet with ready response despite the fact that one might as well back a three-legged horse to win the Derby as to buck the carnival games and gyp wheels. But the gullible bystander persists. He believes that luck and the law of averages has something to do with it-and he’s right; but the luck is all with the operator. The player doesn’t stand a chance. He can’t win because the games are set against him.

The Mechanism of the Ball and Tenpin Game

A good example of the mechanical ingenuity beÂ¬hind some of the devices used to fleece a customer is afforded by the familiar “Ball and Tenpin” game. A ball, suspended by a chain from a gibbet-like cross-arm, swings in an arc on a level that permits it to bowl over a tenpin set in a notch on the platform below. The player must release the ball in such a manner that it passes the pin going out, but bowls it over on the back swing. When the operator demonstrates the trick it looks amazingly simple; but, try as he will, the player cannot duplicate the performance. The secret lies in the fact that the tenpin isn’t where it was when the operator was demonstrating a moment before. Not even the man who invented the trick could beat his own game now. By a simple mechanical adjustment the notch in which the tenpin rests may move, the entire board may move or the arc of the swinging ball may be changed.
Another carnival racket which has proven a veritable mint to its operators is the familiar “bucket shop.” In this game the player’s problem is to toss three balls into a shallow, tilted bucket, in such a manner that the balls will not bounce out over the rim again, but instead roll out of the round hole on the downward side.
While the operator drops the balls into the bucket with consummate ease, the player invariably tosses one ball a little too hard and it bounces out again. If the player scents trickery and protests, the operaÂ¬tor may even take his bucket out onto the fairway and prove to his customer that he can still make his balls stay put. Convinced, the customer tries again, but with no more success than before.
Of course he can’t win! The bucket has a false bottom which either permits or precludes the posÂ¬sibility of making a successful toss by the simple turn of a confederate’s wrist.

Why the Balls Bounce From the Basket

The bucket may have either a “banjo head” botÂ¬tom, or one which moves up or down, causing the receptacle either to be deep or shallow. The “banjo head” bottom is made of pliable material which is made taut or lax by the pressure of a circular piece of steel which acts in the same manner as the tone ring in expensive banjos. When the bottom is at its maximum springiness, the ball will bounce out no matter how easily it may be tossed.
The operator communicates with his confederate by means of word signals included in his converÂ¬sation with onlookers. The accomplice may be beÂ¬hind a curtain within the stand, or in a control room near by. Usually it is the latter case, for this arrangement avoids detection.
Regardless of the type of bottom, the buckets are all operated in a similar manner. The turn of a screw in the control room acts upon movable ball bearings in the central leg of the tripod supporting the bucket. This central leg is hollow. As the ball bearings are forced upward by the pressure of the screw, they in turn act upon a rod or spring which raises or lowers the bottom of the bucket, or exerts an upward pressure on the tautening ring as the case may be.

Secrets of the “Bottle” Game

The human desire to knock balanced things over, the “chip on the shoulder” comÂ¬plex, is capitalized upon in the “milk bottle pyramid” game, But even though stakes are small in this game, the owners aren’t taking any chances. The wooden milk bottles are arranged in a pyramid of 3, 2 and 1. All the bottles, however, are not made entirely of wood. One is weighted at the base. If the weighted bottle is in the bottom row-where it usually is-the player is wasting both his time and money.
These games all produce a goodly revenue, but the “big time” in the carnival fleecing business is represented by the “wheels of chance.” Two types of roulettes are used.
The Percentage Wheel is the common type mounted on the “wall” of the stand. NumÂ¬bers painted on the wheel coincide with a numbered board. A pointer buzzes against the nails of the spinning roulette, indicating the winner when the wheel stops.
Apparently above suspicion, the PercentÂ¬age Wheel is actually geared with a cleverly constructed mechanism which causes the wheel to repeat on a certain series of numÂ¬bers. The predetermined movement of the wheel is known to the “shields,” or carnival confederates, who play the right numbers at the right time.
The G-Wheel is made of two solid parts, a framework attached to the counter by screws and a revolving steel arrow centered on a spindle which rests, in turn, on a movÂ¬able glass base laid upon the counter.

In mounting the G-Wheel, the operator bolts the frame to boards A and C with the spindle resting on a piece of glass laid upon the center board, B. Fake nail heads make it appear that B is fastened to the same studÂ¬ding as A and C; but in reality B is movable and is controlled by a lever.
After the sporting onlookers have placed their bets on the various numbers, the operaÂ¬tor spins the arrow pointer and the graft is on. As the arrow whirls, the operator deÂ¬presses the lever dropping the board B until the spindle no longer contacts the glass plate. The arrow now actually hangs upon the frame, still spinning, but with a friction that rapidly decreases speed. By balancing the two elements of friction and “free wheeling” against each other an experienced operator is able to slop the pointer at any number.