How Circus Elephants are TRAINED (Jul, 1931) 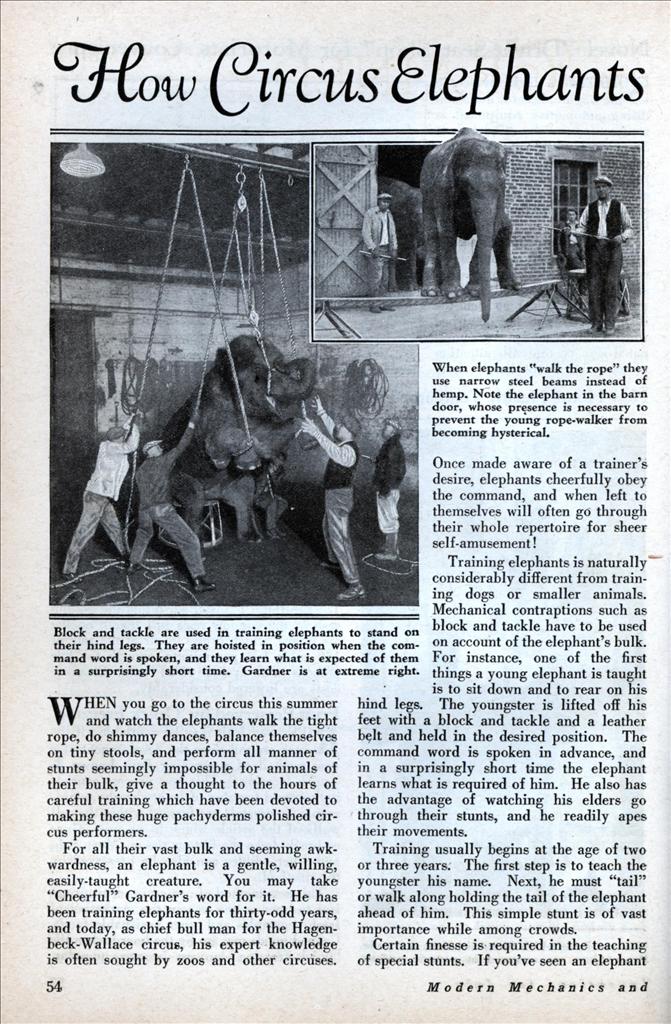 How Circus Elephants are TRAINED

by M. W.MEIER
Who wintered with the circus at Peru, Indiana, headquarters.

How do they train elephants to walk a tight rope and stand on two legs? Mr. Meier, intimately associated with the circus business, tells you all about the tricks of the trade in this fascinating elephant story, and incidentally disproves some favorite legends such as ah elephant’s ability to remember an injury for many years.

WHEN you go to the circus this summer and watch the elephants walk the tight rope, do shimmy dances, balance themselves on tiny stools, and perform all manner of stunts seemingly impossible for animals of their bulk, give a thought to the hours of careful training which have been devoted to making these huge pachyderms polished circus performers.

For all their vast bulk and seeming awkwardness, an elephant is a gentle, willing, easily-taught creature. You may take “Cheerful” Gardner’s word for it. He has been training elephants for thirty-odd years, and today, as chief bull man for the Hagenbeck-Wallace circus, his expert knowledge is often sought by zoos and other circuses.

Once made aware of a trainer’s desire, elephants cheerfully obey the command, and when left to themselves will often go through their whole repertoire for sheer self-amusement!

Training elephants is naturally considerably different from training dogs or smaller animals. Mechanical contraptions such as block and tackle have to be used on account of the elephant’s bulk. For instance, one of the first things a young elephant is taught is to sit down and to rear on his hind legs. The youngster is lifted off his feet with a block and tackle and a leather belt and held in the desired position. The command word is spoken in advance, and in a surprisingly short time the elephant learns what is required of him. He also has the advantage of watching his elders go through their stunts, and he readily apes their movements.

Training usually begins at the age of two or three years. The first step is to teach the youngster his name. Next, he must “tail” or walk along holding the tail of the elephant ahead of him. This simple stunt is of vast importance while among crowds.

Certain finesse is required in the teaching of special stunts. If you’ve seen an elephant walk a tight rope, know that he was first taught to walk along it as it was spread flat on the ground. Gradually it was raised from the floor an inch or two at a time. This trick is not very difficult as the great beasts have a profound sense of equilibrium.

The “tight rope” is in reality a steel plank of narrow width, painted to simulate a coiled rope.

One of Cheerful Gardner’s most interesting stunts is to make Lizzie, boss of the herd, do a violent shimmy dance to the blare of a band. Knotted ropes, loosely looped around her body and see-sawed from side to side by attendants, taught her this in record time and today, it is her proudest accomplishment.

Cheerful’s most dangerous trick is to stick his head into an elephant’s mouth and allow himself to be lifted into the air by the teeth. A contemporary trainer recently tried it and is convalescing from a fractured skull in a Georgia hospital.

Circuses rarely bother to raise their own stock. Elephants take parenthood too seriously and for years, both male and female are overly devoted to their offspring and spend no end of time trying to educate them. So, it has proven cheaper to import young stock whenever required.

It is the Indian elephant which is chosen for zoos and circus work. The African species is too wild and treacherous to ever stand thorough training.

Acclimation is the first problem of an imported beast. The port of entry must be carefully chosen according to the season of the year. Accustomed to tropical heat, the new arrival must be taught to get along at 80 or so degrees. During inclement weather on the road, the elephant must be provided with blankets and often such things as overshoes. Frozen feet and ears have often happened. During winter months he must have steam-heat and plenty of it.

Food is an all-important problem. Used to such tropical foods as bamboo shoots and rice, the newcomer must be switched to hay, corn, oats, bran and alfalfa. Oddly enough, he must even be taught to like peanuts! To be able to feed an elephant a sack of goobers is the natural heritage of every small boy and girl, but the taste must be taught, for peanuts are not a natural food.

Of all the tidbits in the world, an elephant probably prefers a watermelon to anything. Try it the next time you visit a circus. Take lots of them or you may get mobbed. A full-grown elephant requires about forty gallons of water and some hundred pounds of food per day. The first cost is far from the last one!

Tricks, however, are not all that an elephant must be taught. Around a circus lot, one is more useful than tractors, motor trucks and dozens of men. It is the elephant herd which rears the heavy tent poles, works the big block and tackle and drags the wagons around. A full-grown animal can lift a thousand pounds in his trunk. His tonnage “push” has never been fully measured. Things “give” when he applies his tremendous forehead.

Elephants are always worked from the left side, and are forcibly taught to sleep on the left side to conserve space in railway cars and to facilitate handling.

Most of us are familiar with the old saw of comparison—”a memory like an elephant.” According to Cheerful Gardner, having an elephant-like memory is nothing to brag about. An absence of six months from any he has ever trained convinced him he had been completely forgotten! As with other wild animals, elephants must follow a daily program of activity to remember what is required of them.

Gregarious as humans in their herd-like tendencies, elephants always recognize one of their number as “boss” and this leader’s actions are readily followed. The position is gained by sheer dominance and circus men never interfere when a fight is going on for supremacy. Either sex may hold this position, for a female is always on par with the male, albeit nature gave her somewhat shorter tusks. Tusks, incidentally, are always removed from quarrelsome individuals. If the nerve is too sensitive for removal the tusk is capped with a ball.

An elephant has many human similarities. He lives to approximately the same age. From fifty on, however, their usefulness rapidly wanes. Blindness overtakes them and their limbs totter. Heart trouble is a frequent cause of death while pneumonia and rheumatism make fearful havoc in their ranks. Always they must be guarded from chills, dampness and indigestion.

Lice often infest them and their thick, cork-like hides to the contrary, mosquitoes and gnats are horrible pests. They always sleep with their trunk-opening closed to prevent insects from crawling in. Certain elephants which have turned killers in the past, were discovered to have had a cancerous brain growth. For this reason, they are always killed when manifesting a violent disposition.

The feet of an elephant require constant care. The nails must be filed every two months and all corns carefully removed. On each side of every elephant’s head is about an inch-wide opening to important glands. These openings must be kept religiously clean. In their natural state, an elephant does this for himself with jets of water from his trunk.

A trainer’s chief worry is to safeguard his charges from sudden shocks and fears. They are extremely nervous and subject to panic and hysteria. A shrill whistle, a fluttering bird or a snippy fox terrier is ever apt to send them into mad rout.

It was some such simple thing which threw 14 Sells-Floto elephants into a panic at Cranbrook, British Columbia, several years ago.

The whole herd took to the foothills of the Rocky Mountains, leaving a sorry trail of ruin in their wake. Their own trainers found themselves helpless to cope with the situation and the circus hastily wired the rival Hagenbeck-Wallace outfit for the loan of Cheerful Gardner.

He was in Kansas at the time and made the 2200-mile journey by airplane. It took him a full month and the assistance of scores of Indian trackers to round up the herd. Some had climbed high among the peaks and others were helplessly lost amidst primeval forests. It was probably the most thrilling hunt ever staged on this continent. Gardner recovered every beast, although one soon died from exposure to a snowstorm.

“Elephants are the smartest and most lovable animals on earth,” Cheerful Gardner contends, “and the leading attraction at any zoo or circus. Heaps of people are deathly afraid of them, but that’s sheerly because they don’t know their real nature. An elephant is as affectionate as a dog to any one he likes and equally as faithful. He even grows attached to other animals kept near him and mopes when separated. In more than thirty years of contact I’ve never been injured in the slightest way by one of them.”

After maturity (30 to 35 years) a male elephant has a yearly “rutting” season not unlike a male deer. During this period, which often lasts for three months, he must be returned to his permanent quarters and kept securely chained, for he is a menace to everyone, including his trainers, at this time. He cannot be handled or shown on the road. Careful records are kept so that the trainers will be warned sufficiently far in advance to make their charges safe prisoners as this danger period approaches.

A circus regards its elephants as its chief attraction, yet they are at the same time its chief public liability because of their temperament and hair-trigger ways. Children and grown-ups alike give their allegiance to the elephant as the most interesting animal of the circus menagerie. Tigers and lions have a dangerous look; hyenas have repellent personalities, and a hippopotamus seems impractical. But everybody loves an elephant! Thrilling episodes with elephants are few and far between for Cheerful Gardner, who finds his work as humdrum and commonplace as most of us who work in offices.