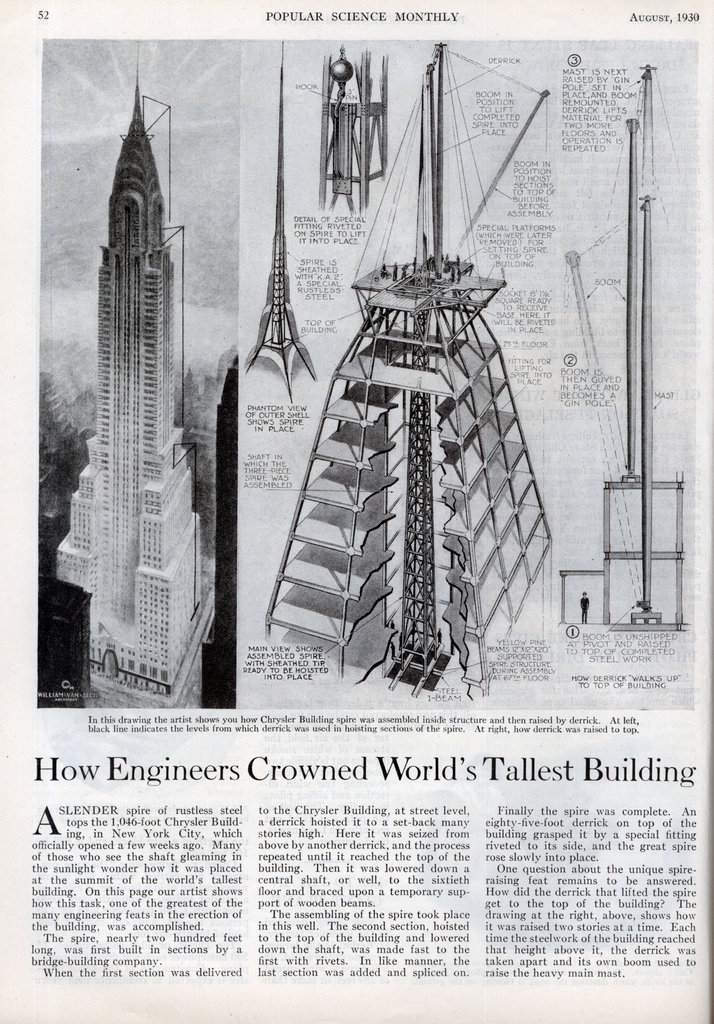 A SLENDER spire of rustless steel tops the 1,046-foot Chrysler Building, in New York City, which officially opened a few weeks ago. Many of those who see the shaft gleaming in the sunlight wonder how it was placed at the summit of the world’s tallest building. On this page our artist shows how this task, one of the greatest of the many engineering feats in the erection of the building, was accomplished.

The spire, nearly two hundred feet long, was first built in sections by a bridge-building company.

When the first section was delivered to the Chrysler Building, at street level, a derrick hoisted it to a set-back many stories high. Here it was seized from above by another derrick, and the process repeated until it reached the top of the building. Then it was lowered down a central shaft, or well, to the sixtieth floor and braced upon a temporary support of wooden beams.

The assembling of the spire took place in this well. The second section, hoisted to the top of the building and lowered down the shaft, was made fast to the first with rivets. In like manner, the last section was added and spliced on.

Finally the spire was complete. An eighty-five-foot derrick on top of the building grasped it by a special fitting riveted to its side, and the great spire rose slowly into place.

One question about the unique spire-raising feat remains to be answered. How did the derrick that lilted the spire get to the top of the building? The drawing at the right, above, shows how it was raised two stories at a time. Each time the steelwork of the building reached that height above it, the derrick was taken apart and its own boom used to raise the heavy main mast.