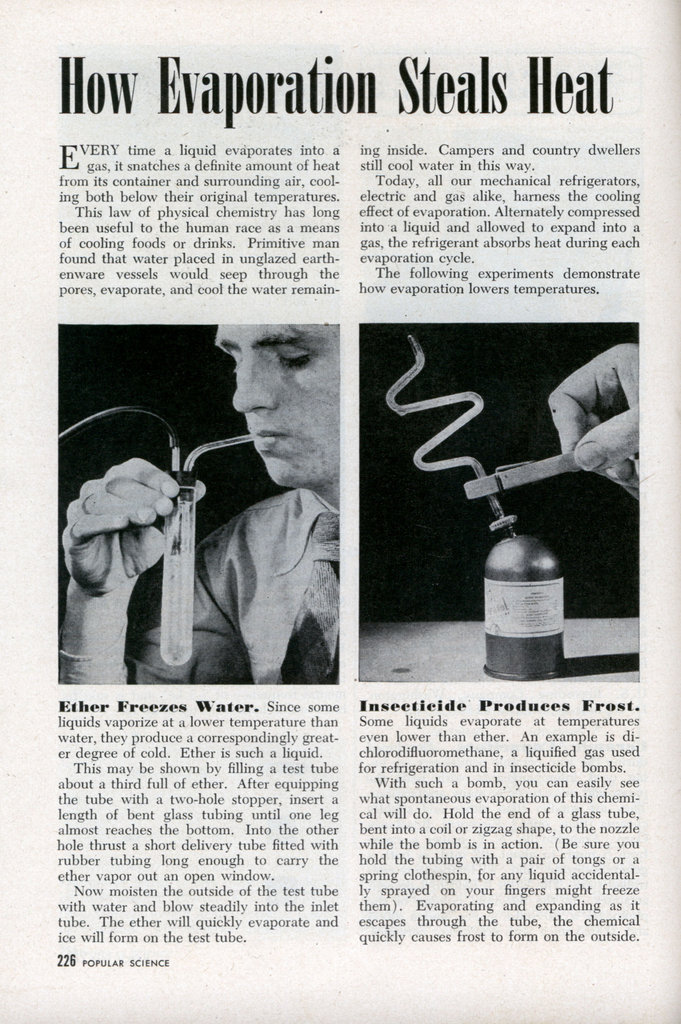 EVERY time a liquid evaporates into a gas, it snatches a definite amount of heat from its container and surrounding air, cooling both below their original temperatures. This law of physical chemistry has long been useful to the human race as a means of cooling foods or drinks. Primitive man found that water placed in unglazed earthenware vessels would seep through the pores, evaporate, and cool the water remaining inside. Campers and country dwellers still cool water in this way.

Today, all our mechanical refrigerators, electric and gas alike, harness the cooling effect of evaporation. Alternately compressed into a liquid and allowed to expand into a gas, the refrigerant absorbs heat during each evaporation cycle.

Ether Freezes Water. Since some liquids vaporize at a lower temperature than water, they produce a correspondingly greater degree of cold. Ether is such a liquid.

This may be shown by filling a test tube about a third full of ether. After equipping the tube with a two-hole stopper, insert a length of bent glass tubing until one leg almost reaches the bottom. Into the other hole thrust a short delivery tube fitted with rubber tubing long enough to carry the ether vapor out an open window.

Now moisten the outside of the test tube with water and blow steadily into the inlet tube. The ether will quickly evaporate and ice will form on the test tube.

Some liquids evaporate at temperatures even lower than ether. An example is di-chlorodifluoromethane, a liquified gas used for refrigeration and in insecticide bombs.

With such a bomb, you can easily see what spontaneous evaporation of this chemical will do. Hold the end of a glass tube, bent into a coil or zigzag shape, to the nozzle while the bomb is in action. (Be sure you hold the tubing with a pair of tongs or a spring clothespin, for any liquid accidentally sprayed on your fingers might freeze them). Evaporating and expanding as it escapes through the tube, the chemical quickly causes frost to form on the outside.

In an electric refrigerator, a motor-driven compressor liquefies a refrigerant gas, such as sulphur dioxide, by squeezing it powerfully. For purposes of experimentation, you can liquefy this gas by subjecting it to intense cold.

To generate the gas, put 15 grams of sodium bisulphite into a flask arranged, as at the right, with dilute hydrochloric acid (1 part acid to 2 parts water) in a dropping funnel above it. To dry the gas, fill the horizontal tube with lumps of calcium chloride, packing cotton loosely in each end before inserting stoppers with entry and exit tubes. Lead the latter into a large test tube supported in a freezing mix- ‘ ture made by filling the beaker half full of acetone and adding dry ice slowly. (Caution: keep your fingers away from the mixture.) Now open the clamp, allowing acid to fall drop by drop, and apply gentle heat. When a quantity of liquid sulphur dioxide has collected, lift the test tube from the freezing mixture in a well-ventilated room. The liquid will quickly evaporate, forming frost as at the right above.

Gas Refrigerator Uses Ammonia. Altered as at the right, the apparatus will generate and liquefy ammonia, the refrigerant found in gas refrigerators. Put in the flask a dry mixture of 15 grams ammonium chloride and 30 grams of calcium hydroxide, insert a one-hole stopper, and in the drying tube place a loose layer of calcium oxide. Omit the hydrochloric acid; gentle heat will start the reaction. When some liquid ammonia has collected, remove the test tube from the freezing mixture. Again, frost will form.

Chemicals Produce Cold. A few ounces of ammonium nitrate crystals will show that cold also may be produced chemicallyâ€”merely by dissolving certain substances in water. A commercial device for cooling bottled beverages on picnics makes use of this principle.

To demonstrate how it works, put a few drops of water on a block of wood or a cork coaster and set a thin-bottomed glass on the water. Then put equal amounts of cold water and ammonium nitrate into the glass and stir rapidly. The coaster will freeze to the bottom of the glass. In dissolving, the chemical absorbs heat from its surroundings.