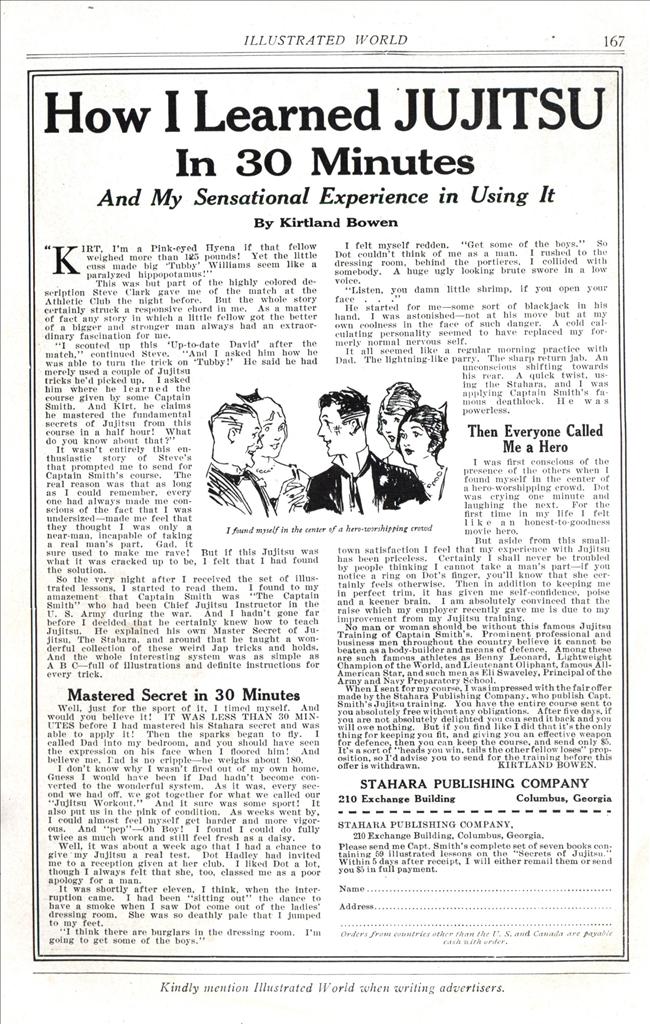 How I Learned JUJITSU

“KIRT, I’m a Pink-eyed Hyena if that follow weighed more than 125 pounds! Yet the little cuss made big ‘Tubby’ Williams seem like a paralyzed hippopotamus!”

This was but part of the highly colored description Steve Clark gave me of the match at the Athletic Club the night before. But the whole story certainly struck a responsive chord in me. As a matter of fact any story in which a little fellow got the better of a bigger and stronger man always had an extraordinary fascination for me.

“I scouted up this ‘Up-to-date David’ after the match,” continued Steve. “And I asked him how he was able to turn the trick on ‘Tubby!’ He said he had merely used a couple of Jujitsu tricks he’d picked up. I asked him where he learned the course given by some Captain Smith. And Kirt, he claims he mastered the fundamental secrets of Jujitsu from this course in a half hour! What do you know about that?”

It wasn’t entirely this enthusiastic story of Steve’s that prompted me to send for Captain Smith’s course. The real reason was that as long as I could remember, every one had always made me conscious of the fact that I was undersized—made me feel that they thought I was only a near-man, incapable of taking a real man’s part. Gad. it sure used to make me rave! Rut if this Jujitsu was what it was cracked up to be, I felt that I had found the solution.

So the very night after I received the set of illustrated lessons, I started to read them. I found to my amazement that Captain Smith was “The Captain Smith” who had been Chief Jujitsu Instructor in the U. S. Army during the war. And I hadn’t gone far before I decided that he certainly knew how to teach Jujitsu. He explained his own Master Secret of Jujitsu. The Stahara, and around that he taught a wonderful collection of these weird Jap tricks and holds. And the whole interesting system was as simple as A B C—full of illustrations and definite Instructions for every trick.

Well, just for the sport of it, I timed myself. And would you believe it! IT WAS LESS THAN 30 MINUTES before I had mastered his Stahara secret and was able to apply it! Then the sparks began to fly. I called Dad into my bedroom, and you should have seen the expression on his face when I floored him! And believe me, Tad is no cripple—he weighs about 180.

I don’t know why I wasn’t fired out of my own home. Guess I would have been if Dad hadn’t become converted to the wonderful system. As it was, every second we had off. we got together for what we called our “Jujitsu Workout.” And it sure was some sport! It also put us in the pink of condition. As weeks went by, I could almost feel myself get harder and more vigorous. And “pep”—Oh Boy! I found I could do fully twice as much work and still feel fresh as a daisy.

Well, it was about a week ago that I had a chance to give my Jujitsu a real test. Dot Hadley had invited me to a reception given at her club. I liked Dot a lot, though I always felt that she, too, classed me as a poor apology for a man.

It was shortly after eleven, I think, when the interruption came. I had been “sitting out” the dance to have a smoke when I saw Dot come out of the ladies’ dressing room. She was so deathly pale that I jumped to my feet.

“I think there are burglars in the dressing room. I’m going to get some of the boys.”

I felt myself redden. “Get some of the boys.” So Dot couldn’t think of me as a man. I rushed to the dressing room, behind the portieres, I collided with somebody. A huge ugly looking brute swore in a low voice.

He started for me—some sort of blackjack in his hand. I was astonished—not at his move but at my own coolness in the face of such danger. A cold calculating personality seemed to have replaced my formerly normal nervous self.

It all seemed like a regular morning practice with Dad. The lightning-like parry. The sharp return jab. An unconscious shifting towards his rear. A quick twist, using the Stahara, and I was applying Captain Smith’s famous deathlock. He was powerless.

Then Everyone Called Me a Hero.

I was first conscious of the presence of tlie others when I found myself in tlie center of a hero-worshipping crowd. Dot was crying one minute and laughing tlie next. For the first time in my life I felt like an honest-to-goodness movie hero.

But aside from this smalltown satisfaction I feel that my experience with Jujitsu has been priceless. Certainly I shall never be troubled by people thinking I cannot take a man’s part—if you notice a ring on Dot’s finger, you’ll know that she certainly feels otherwise. Then in addition to keeping me in perfect trim, it has given me self-confidence, poise and a keener brain. I am absolutely convinced that the raise which my employer recently gave me is due to my improvement from my Jujitsu training.

No man or woman should be without this famous Jujitsu Training of Captain Smith’s. Prominent professional and business men throughout the country believe it cannot be beaten as a body-builder and means of defence. Among these are such famous athletes as Benny Leonard, Lightweight Champion of the World, and Lieutenant Oliphant, famous All-American Star, and such men as Eli Swaveley, Principal of the Army and Navy Preparatory School.

When I sent for my course, I was I mpressed with the fair offer made by the Stahara Publishing Company, who publish Capt. Smith’s Jujitsu training. You have the entire course sent to you absolutely free without any obligations. After five days, if you are not absolutely delighted you can send it back and you will owe nothing. But if you find like I did that it’s the only thing for keeping you fit, and giving you an effective weapon for defence, then you can keep the course, and send only $5. It’s a sort of “heads you win, tails the other fellow loses” proposition, so I’d advise you to send for the training before this offer is withdrawn. KIRTLAND BOWEN.

STAHARA PUBLISHING COMPANY,
210 Exchange Building, Columbus, Georgia.
Please send me Capt. Smith’s complete set of seven books containing 59 illustrated lessons on the “Secrets of Jujitsu.” Within 5 days after receipt, I will either remail them or send you $5 in full payment.