Modern Mechanix
Issue: Sep, 1930
Posted in: Aviation
4 Comments on How I Solved the Helicopter Problem (Sep, 1930)

How I Solved the Helicopter Problem (Sep, 1930)

Obviously he solved the problem so well that almost all modern helicopters look just like this. 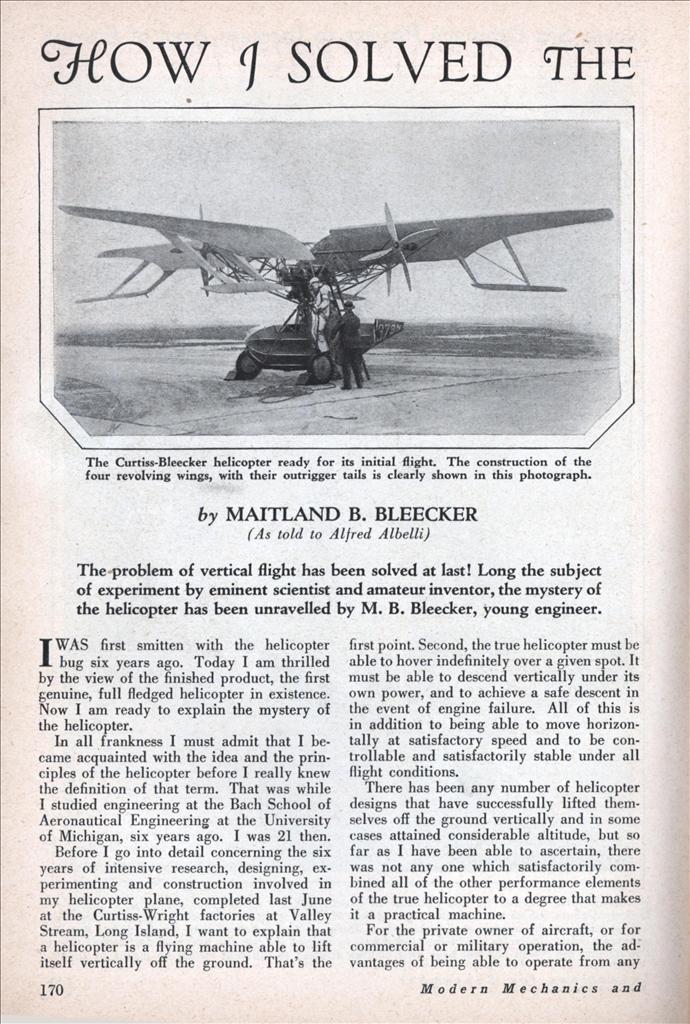 How I Solved the Helicopter Problem

by MAITLAND B. BLEECKER
(As told to Alfred Albelli)

The problem of vertical flight has been solved at last! Long the subject of experiment by eminent scientist and amateur inventor, the mystery of the helicopter has been unravelled by M. B. Bleecker, young engineer.

I WAS first smitten with the helicopter bug six years ago. Today I am thrilled by the view of the finished product, the first genuine, full fledged helicopter in existence. Now I am ready to explain the mystery of the helicopter.

In all frankness I must admit that I became acquainted with the idea and the principles of the helicopter before I really knew the definition of that term. That was while I studied engineering at the Bach School of Aeronautical Engineering at the University of Michigan, six years ago. I was 21 then.

Before I go into detail concerning the six years of intensive research, designing, experimenting and construction involved in my helicopter plane, completed last June at the Curtiss-Wright factories at Valley Stream, Long Island, I want to explain that a helicopter is a flying machine able to lift itself vertically off the ground. That’s the first point. Second, the true helicopter must be able to hover indefinitely over a given spot. It must be able to descend vertically under its own power, and to achieve a safe descent in the event of engine failure. All of this is in addition to being able to move horizontally at satisfactory speed and to be controllable and satisfactorily stable under all flight conditions.

There has been any number of helicopter designs that have successfully lifted themselves off the ground vertically and in some cases attained considerable altitude, but so far as I have been able to ascertain, there was not any one which satisfactorily combined all of the other performance elements of the true helicopter to a degree that makes it a practical machine.

For the private owner of aircraft, or for commercial or military operation, the advantages of being able to operate from any small plot of ground and to return successfully to the ground are obvious, and it is not beyond the realm of possibility, I feel, that such an airplane, when placed in practical operation, might revolutionize commercial aviation as it exists today.

My so-called Curtiss-Bleecker helicopter consists essentially of four large wings, or blades, mounted at right angles to one another and revolving in a horizontal plane. The wings are caused to revolve by propellers, one to each wing, mounted forward of the leading edge, about two-thirds of the way out.

The propellers are driven through a gear and shaft arrangement from one central engine, a 425-horse power air-cooled radial, mounted horizontally. To each of the wings are attached outrigger booms mounting small elevators or tail surfaces.

Thus, each unit is in reality a small airplane, consisting of a power-driven wing with a tail which can control the angle of incidence of the wing at any point. Beneath the four wings is slung a small fuselage. In this is located the crew. It is equipped with a conventional type of landing-gear.

Despite its radical departure in design and construction from any other type of flying machine, my helicopter does resemble somewhat, in outward appearance, the De La Cierva autogyro. There is one strong fundamental difference in design, however. The wings of my helicopter are made to revolve by the pull of their propellers. In the autogyro, the rotation of the wings results from the forward motion of the entire machine.

This variance in design means that the helicopter can soar vertically off the ground without any run and can hover indefinitely over any spot, performances which cannot be attained by the autogyro.

It was while I was an engineer at the National Advisory Committee for Aeronautics at Langley Field in the early part of 1926 that I completed my plans for the helicopter. Instantaneously I was ordered to take up quarters at the Cur- tiss workshops. Four years of downright hard work followed. A whole year and a half was taken up with research and wind tunnel testing to determine the flight possibilities of my model.

My toughest job came in the making of an intelligent engineering analysis of my problems. Take for instance, the hovering condition of flight, where the machine must remain stationary in the air at a given point. The regular wind tunnel equipment was inadequate and it was necessary to devise special methods. We built special apparatus for this and for other tests. Everything was veiled in secrecy for four years. Not one iota of detail leaked out.

My job is done. I feel that I have given to aviation an engine of the air which will revolutionize the industry if properly nurtured. My helicopter will rise vertically, it will hover over a given spot, it will descend safely vertically, and move horizontally at a reasonable speed. It should be an invigorating spur to aeronautics.