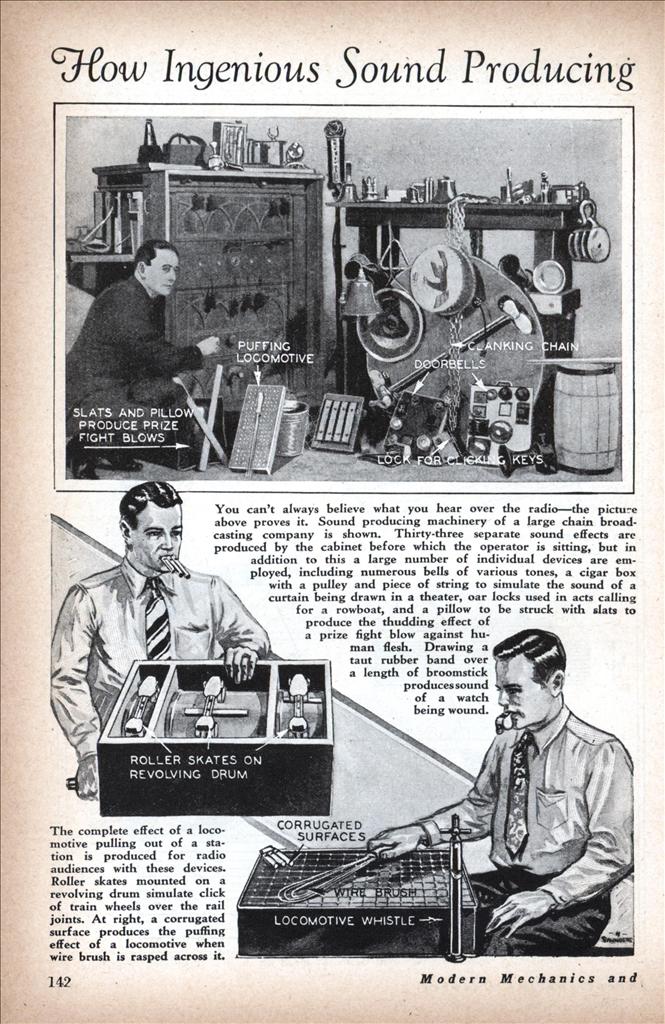 You can’t always believe what you hear over the radio—the picture above proves it. Sound producing machinery of a large chain broadcasting company is shown. Thirty-three separate sound effects arc produced by the cabinet before which the operator is sitting, but in addition to this a large number of individual devices are employed, including numerous bells of various tones, a cigar box with a pulley and piece of string to simulate the sound of a curtain being drawn in a theater, oar locks used in acts calling for a rowboat, and a pillow to be struck with slats to produce the thudding effect of a prize fight blow against human flesh. Drawing a taut rubber band over a length of broomstick produces sound of a watch being wound.

The complete effect of a locomotive pulling out of a station is produced for radio audiences with these devices. Roller skates mounted on a revolving drum simulate click of train wheels over the rail joints. At right, a corrugated surface produces the puffing effect of a locomotive when wire brush is rasped across it.

Sea and water effects are produced with drums, two types of which are shown in the above drawing. Both are loaded with small peas and stones which rattle over corrugated surfaces, the main difference being that one drum contains a heavier “charge” of stones than the other. Thus, when used in unison, both the roar of beating sea waves and the soft swish of water against a sandy beach can be reproduced.

Here are two of the most novel radio sound-makers. At the left, a piece of string, suspended through the bottom of a tin pail, produces the roar of a lion when a bit of leather rubbed with rosin is pulled along it. Above, the sound of an airplane motor is reproduced by lengths of soft rubber hose beaten against a drum head by an electric motor. Apparent speed and distance of the airplane is controlled by regulating the small motor to speed up or slow down the revolving hose.