How Machines Speed Up the Modern Newspaper (Mar, 1932) 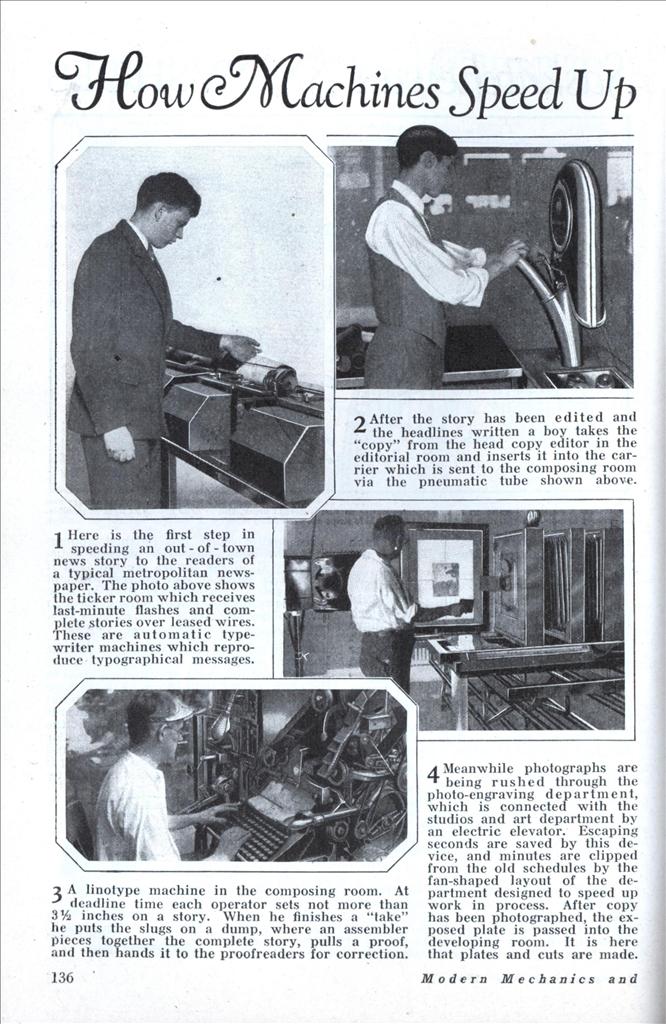 How Machines Speed Up the Modern Newspaper

News is the world’s most perishable commodity. Presses of the great metropolitan newspapers run an endless race for priority, with increased circulation going to the paper which can split seconds in getting the latest news and pictures to the readers.

1. Here is the first step in speeding an out-of-town news story to the readers of a typical metropolitan newspaper. The photo above shows the ticker room which receives last-minute flashes and complete stories over leased wires. These are automatic typewriter machines which reproduce typographical messages.

2. After the story has been edited and the headlines written a boy takes the “copy” from the head copy editor in the editorial room and inserts it into the carrier which is sent to the composing room via the pneumatic tube shown above.

3. A linotype machine in the composing room. At J deadline time each operator sets not more than 3-1/2 inches on a story. When he finishes a “take” lie puts the slugs on a dump, where an assembler pieces together the complete story, pulls a proof, and then hands it to the proofreaders for correction.

4. Meanwhile photographs are ‘ being rushed through the photo-engraving department, which is connected with the studios and art department by an electric elevator. Escaping seconds are saved by this device, and minutes are clipped from the old schedules by the fan-shaped layout of the department designed to speed up work in process. After copy has been photographed, the exposed plate is passed into the developing room. It is here that plates and cuts are made.

5. After the proofreader has made corrections the make-up man, at the left, takes the corrected galley and makes up his completed page. Lockup can be furnished on late copy within ten minutes from the time the story reaches the composing room via the pneumatic tubes. The man on the right is known as the composing room make-up man.

6. After the complete page of type and cuts has been locked up it is taken to the stereotyping room, where a papier-mache matrix is made of the page. This matrix is baked dry in a few seconds and placed in the autoplate caster. Molten type-metal is then poured into the caster, making a plate of the page.

7. After the plate comes from ‘ the shaver, where it is trimmed smooth, it slides on a conveyor into the press room adjoining. When the edition is printed, the dead plates go back to the foundry for remelting. Here the pressman is slipping a stereotype plate onto a press cylinder. On the cylinder used for the front page is a space known as the “fudge box”. Last minute news may be set up and placed in this space without casting an entire new page.

8 Here is a man regulating the run of the presses. These are three stories high and will print, cut, and fold 360,000 thirty-six-page newspapers per hour. Thirty-six units of Goss straight-line presses with Cline Westinghouse electric controls were installed by a New York newspaper publisher at cost of $800,000.