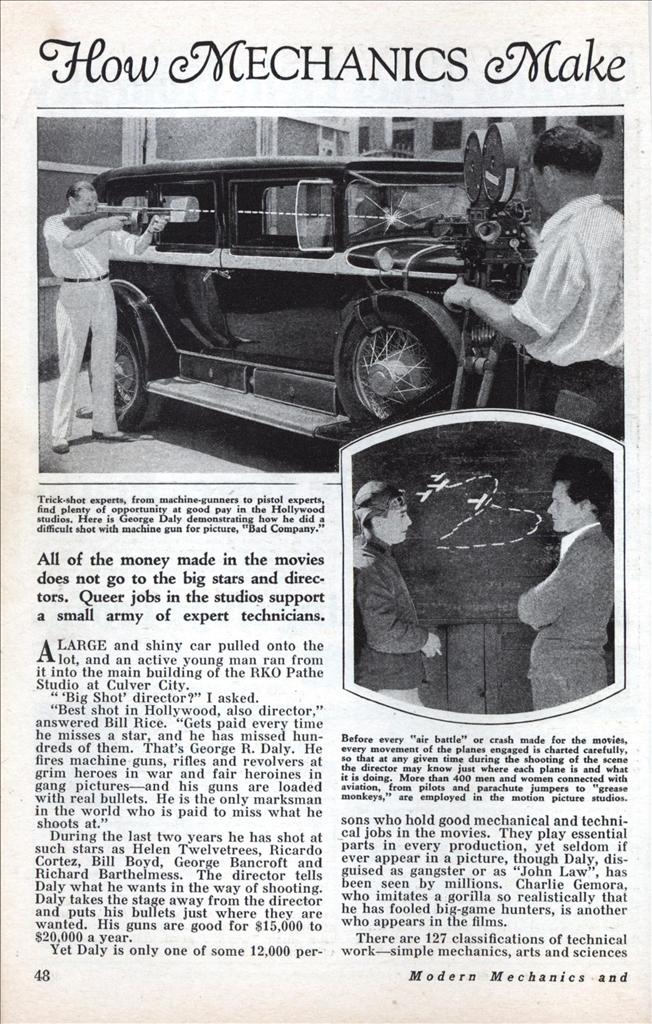 How Mechanics Make Your Movies

All of the money made in the movies does not go to the big stars and directors. Queer jobs in the studios support a small army of expert technicians.

A LARGE and shiny car pulled onto the lot, and an active young man ran from it into the main building of the RKO Pathe Studio at Culver City.

“Best shot in Hollywood, also director,” answered Bill Rice. “Gets paid every time he misses a star, and he has missed hundreds of them. That’s George R. Daly. He fires machine guns, rifles and revolvers at grim heroes in war and fair heroines in gang pictures—and his guns are loaded with real bullets. He is the only marksman in the world who is paid to miss what he shoots at.”

During the last two years he has shot at such stars as Helen Twelvetrees, Ricardo Cortez, Bill Boyd, George Bancroft and Richard Barthelmess. The director tells Daly what he wants in the way of shooting. Daly takes the stage away from the director and puts his bullets just where they are wanted. His guns are good for $15,000 to $20,000 a year.

Yet Daly is only one of some 12,000 per- sons who hold good mechanical and technical jobs in the movies. They play essential parts in every production, yet seldom if ever appear in a picture, though Daly, disguised as gangster or as “John Law”, has been seen by millions. Charlie Gemora, who imitates a gorilla so realistically that he has fooled big-game hunters, is another who appears in the films.

There are 127 classifications of technical work—simple mechanics, arts and sciences —entirely apart from the actors and actresses, in the business of making a motion-picture. Approximately 40,000 persons are dependent on these jobs for their The payroll of the 12,000 runs high in the millions, for the best and most permanent positions “in pictures” are off the stage, not on it; back or at one side of the cameras, rather than in front of them.

For every girl who is seen on the film, there are fifty in the business, arts and traits of the movies who draw almost as good salaries, and draw them all the year ’round. For every man who gets onto the screen, from mobsters to stars, there are fifty others, from carpenters to zoologists, who actually have and hold better jobs than the average of the players.

Making a Model Train Puff A model-builder—there are about 100 of these specialized workers in Hollywood— saw the director trying to get a model locomotive to puff as it pulled a train of miniature cars up a distant background grade.

The modeler went home, watched his little boy playing with a toy pistol which used percussion caps strung on a string of paper. He found a smoking mixture to replace the caps, put a clockwork in the engine, exploded the tiny smoke-bombs at regular intervals through the stack, and has received more than $5,000 for the use of his invention. Incidentally, he also applied it to model airplanes, dirigibles, motor-boats, steam-ships and cannon.

There seems to be no limit to the financial returns to the inventor in the picture studios. The only demand is that the invention must “work”; perpetual-motion and other freak machines are barred.

A camera-man idly watching ironworkers doing their stuff five or six stories above him, developed a steel arm, of girder-truss formation, to carry a camera and two men on the front end, while the base was elevated or depressed as it was carried on a truck in front of the set or within the studio. The purpose is to make pictures at unusual angles—”slants”, the camera-men call them, and the device has been found invaluable for banquet, boudoir, hospital and similar scenes. All the studios are paying this young man good royalties on his patent.

At least a score of manicure girls in Hollywood are well able to retire on what they have earned, with their tips, and the still more valuable investment information they have received at the studios. The majority of them never stepped on a movie set, far from appearing in a picture, though virtually all their work has been done on the lot.

“Stand-ins” and Doubles Then, there are the “stand-in” girls and men, who assume the exact positions of the stars and starlets, while lights are being adjusted or cameras focused and other details attended to, while the players relax and rest.

Somewhat similar to these, but more dangerously employed, are the men and women who substitute for the stars when the script puts the heroine or the hero in a dangerous spot. Their names are unknown to any but the casting directors, and they range from parachute jumpers, like pretty little Mary Wiggins, to deep-sea divers, like Charlie Johansen, with stunt-plane dyers, wild-horse riders, bull-fighters, animal-wrestlers, auto-crash drivers, engineers who will take a locomotive into a collision or “ride” a boiler explosion, in place of the actor or actress.

The pay of these daring “stunt” performers ranges from the $3,500 given Dick Grace or other aviators for crashing a plane nose first into the earth, to $250 handed to Mike Mercier for getting himself out of a sunken submarine.

Building-Trade Boom Most of the best-paid jobs in the movies, however, carry no hazards. There are nearly 700 plain and fancy carpenters, cabinet-makers, home-builders and similar mechanical crafts, who receive from $5 minimum to $25 maximum a day. Cement, stucco, plaster, concrete and stone workers number about 200, and each studio maintains its own department for this work, a part of the general arts and buildings division.

Wrought-iron workers have and keep well-paying jobs, though there are only about 50 of them employed in the studios. Taxidermists, three in number, find plenty of work in Hollywood, and a Mexican Indian clay modeler has a continuous, well-paid job, making ornamental and useful pots, vases, dishes and so on for Latin-American pictures.

There are script-girls, complete dictionaries of every play on which they have been employed, whose salaries would make a bank cashier leave his cage. One of these developed a soul-rending scream and a maniacal laugh. She adds about $250 a month to her income by making these noises off stage for the “taikies.”

A smart gardener, who directs one of the fifty or more studio flower-gardens in Hollywood, trains canaries, so that they will sing or whistle on signal. He tells me that he picks lip about $1,500 a year renting these birds for sound pictures. A smart Chinese and an equally clever Japanese have organized groups of their country-men and women, with costumes, to appear as “atmosphere” for Oriental plays, and also to stand about the lobbies of theaters making premier showings of these films.

With all the camera-men on the various lots, the ordinary portrait photographer would seem to have small opportunity in Hollywood, yet he, and she, thrive to the number of about 100, coupled with half as many “personality movie” makers.

When a girl, or man, is trying to get into the movies, she or he present themselves to the casting director, equipped with a set of still photographs, in various costumes and positions, a reel of about 100 feet of action on stage, and a phonograph record of her or his voice. All these are made by “outside” artists at the expense of the person using them. Such an outfit of stills, movie and voice record costs from $100 in the cheaper commercial studios to $500.

The growing of whiskers is no new pastime, but there are 112 men in Hollywood who can be depended upon to pre- sent a luxurious “crop” at the director’s call. They receive from $10 a day on a long picture, to a flat sum averaging more than this, on a short.