Modern Mechanix
Issue: Oct, 1932
Posted in: Sign of the Times
Tags: in the future, NYC, urbanism
2 Comments on How Much Longer Will Our Big Cities Last? (Oct, 1932) 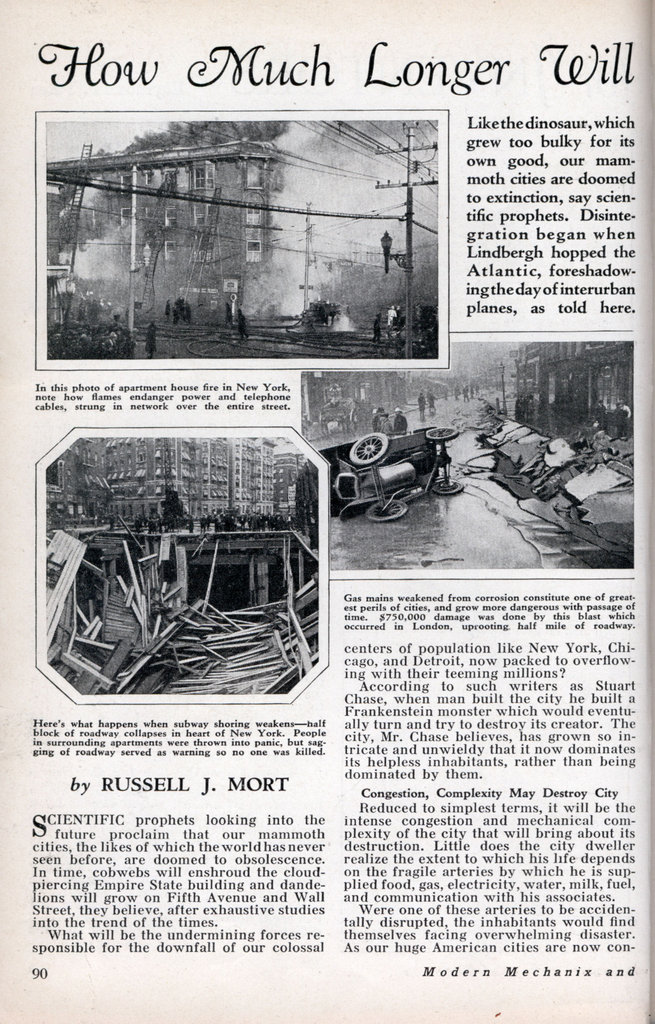 How Much Longer Will Our Big Cities Last?

Like the dinosaur, which grew too bulky for its own good, our mammoth cities are doomed to extinction, say scientific prophets. Disintegration began when Lindbergh hopped the Atlantic, foreshadowing the day of interurban planes, as told here.

SCIENTIFIC prophets looking into the future proclaim that our mammoth cities, the likes of which the world has never seen before, are doomed to obsolescence. In time, cobwebs will enshroud the cloud-piercing Empire State building and dandelions will grow on Fifth Avenue and Wall Street, they believe, after exhaustive studies into the trend of the times.

What will be the undermining forces responsible for the downfall of our colossal centers of population like New York, Chicago, and Detroit, now packed to overflowing with their teeming millions?

According to such writers as Stuart Chase, when man built the city he built a Frankenstein monster which would eventually turn and try to destroy its creator. The city, Mr. Chase believes, has grown so intricate and unwieldy that it now dominates its helpless inhabitants, rather than being dominated by them.

Reduced to simplest terms, it will be the intense congestion and mechanical complexity of the city that will bring about its destruction. Little does the city dweller realize the extent to which his life depends on the fragile arteries by which he is supplied food, gas, electricity, water, milk, fuel, and communication with his associates.

Were one of these arteries to be accidentally disrupted, the inhabitants would find themselves facing overwhelming disaster. As our huge American cities are now constructed, a highly complex network of transportation arteries supplies the aforementioned necessities. Water is piped to every house and office building by an interwoven mass of pipes. Gas is supplied in a similarly snarled system. A labyrinth of tunnels and a lacework of surface and elevated cars conveys the city’s millions between their homes and offices and factories. Food and milk are delivered to the housewife’s kitchen through a complicated delivery system within the city, to say nothing of the highly systematized methods of importation into the city’s markets.

Lives Depend Upon System Maintenance

The lives of city dwellers depend largely upon the orderly working of this maze of transportation channels which supply the urban millions with the basic necessities of life. But what would happen should this overdeveloped system break down under the blows of an enemy in war time or through some great cataclysm which insurance policies describe as “Acts of God?”

A disaster of such magnitude would be difficult to envisage. Mr. Chase, in his book “Men and Machines,” asserts that “if 20,000 trained enginemen at the controls of the system which supplies the country with necessities were blotted out of existence tomorrow, the social and industrial life of the nation would be paralyzed. Mines, factories and public factories would cease production. Food supplies would accumulate remote from great markets. Babies would perish while men and women fought for bread and meat.”

Such a crisis might overwhelm the nation as a whole, but the city would be visited with a far worse disaster. Engineers who have made a close study of the situation claim that technical experts, not over a hundred in number, and situated at key positions, could cut off the city’s milk, water, gas, food, electrical and fuel supplies so completely that the whole population would starve to death in three months.

Such major disasters are ever imminent. Every day the city dweller reads headlines of minor disasters resulting from defects in the complex supply system. Every city street teems with possibilities of disaster of which the people are but little aware. Gas mains explode, blotting out lives and sometimes asphyxiating hundreds. Water pipes burst and flood whole blocks, effecting a serious interruption of traffic.

Innumerable deaths have resulted from the cave-in of subway tunnels. In one recent disaster in New York City seventeen people were killed and over a hundred injured. While the disaster evoked big headlines, it passed as an almost commonplace occurrence.

However gloomy a picture these catastrophes may present, engineers believe that the scene will be far more dismal twenty or thirty years from now. The network of gas and water pipes, power supply and telephone lines, and the subway tunnels and vaults, all of which form the throbbing veins of the city’s life, are still comparatively young and substantial. When they begin to age and weaken from fatigue, however, disasters will be blazed across the headlines far more frequently than they are at present.

Insulation on the high tension power lines will, as the years pass, wear thin, short circuit, and start cataclysmic fires. Girders and beams supporting elevated trains will suffer fatigue from the constant rumble of traffic overhead, and when they collapse hundreds of closely packed humans in the speeding trains will suffer serious injury or death.

The greatest potential dangers, engineers believe, will lie in explosions from rusted-out gas and water mains, which even now frequently spread havoc in city streets, causing more damage than dynamite. With increasing age will come an increasing frequency of these ruptures.

While modern engineering genius has improved the qualities of the metals which go into the construction of these giant mains, it cannot make over, except at huge expense, pipes which were laid down ten and twenty years ago, and it is these pipes which may be expected to do the damage.

Health of the city dweller is another item that will demand consideration. Hand in hand with the increase in the number and height of skyscrapers there goes a diminution of the amount of sunlight and fresh air accessibleâ€”two elements so necessary for the well-being of the millions which live and work among the tall buildings. Even now multitudes of tall buildings cut off too much of the health-giving radiation of the sun, while giant smoke-stacks and countless automobiles belch gases which work havoc on the lungs of the city’s population.

All the disasters that the cities of the future may suffer will pale into insignificance beside the horrors that may be perpetrated upon civilians in the event of war. Military authorities opine that wars of tomorrow will be fought, not along a continuous front, as was the case in the last war, but behind the lines.

Where, then, are we to live in the future, you may well wonder? When New York, Philadelphia, Chicago and Detroit are but deserted areas of crumbling skyscrapers facing streets overrun with weeds, where will the millions who once inhabited the cities be living?

The answer to this bewildering question may be found in the prophecies of such renowned architects as Frank Lloyd Wright, who foresees a new era in the modes of human habitation. With the disintegration of the city, these prophets say, there will come the development of diminutive villages which will cluster around a trading
center, closely resembling the financial district of the present city, where all business and manufacturing will be carried on, but which workers will abandon the minute their labors have ceased for the day.

What agencies will make possible the inevitable growth of this “cluster city?” The chief instrument, it is believed, will be the airplane. The city really began its disintegration the moment Lindbergh set sail for France on his epochal trans-Atlantic flight, thereby proving the practicability of the airplane in spanning long distances with a minimum of peril and time.

While all these prophecies seem fantastic, it must be remembered that even more amazing changes have taken place in the last hundred years; so that by comparison the “cluster city” will not be so astounding after all.