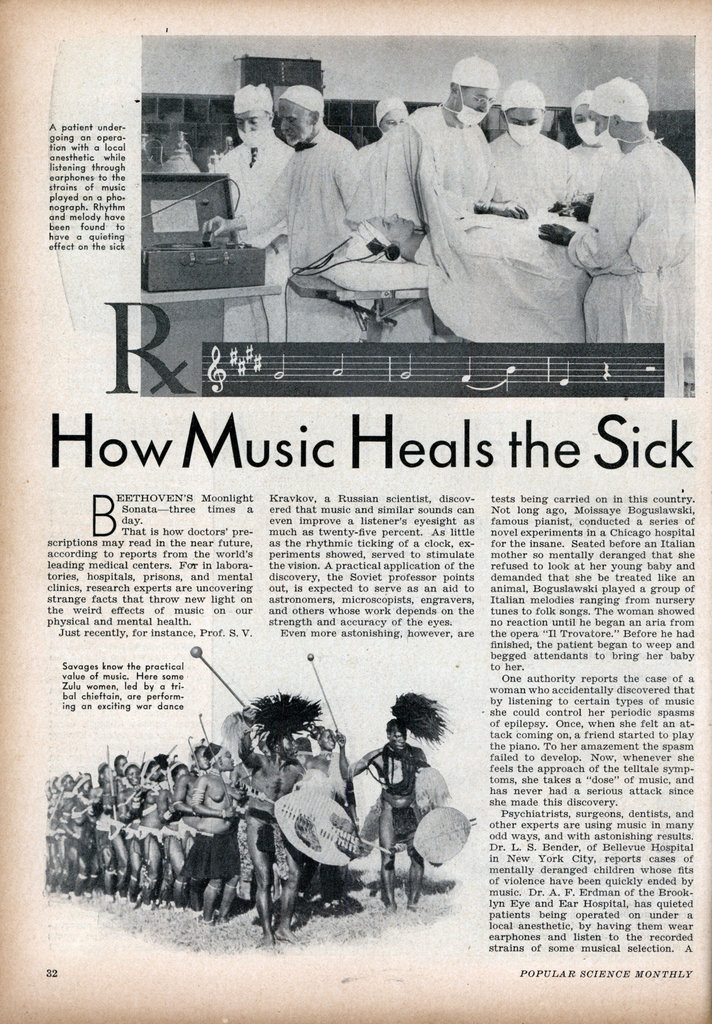 How Music Heals the Sick

BEETHOVEN’S Moonlight Sonataâ€”three times a day. That is how doctors’ prescriptions may read in the near future, according to reports from the world’s leading medical centers. For in laboratories, hospitals, prisons, and mental clinics, research experts are uncovering strange facts that throw new light on the weird effects of music on our physical and mental health.

Just recently, for instance, Prof. S. V.Kravkov, a Russian scientist, discovered that music and similar sounds can even improve a listener’s eyesight as much as twenty-five percent. As little as the rhythmic ticking of a clock, experiments showed, served to stimulate the vision. A practical application of the discovery, the Soviet professor points out, is expected to serve as an aid to astronomers, microscopists, engravers, and others whose work depends on the strength and accuracy of the eyes. Even more astonishing, however, are tests being carried on in this country. Not long ago, Moissaye Boguslawski, famous pianist, conducted a series of novel experiments in a Chicago hospital for the insane. Seated before an Italian mother so mentally deranged that she refused to look at her young baby and demanded that she be treated like an animal, Boguslawski played a group of Italian melodies ranging from nursery tunes to folk songs. The woman showed no reaction until he began an aria from the opera “II Trovatore.” Before he had finished, the patient began to weep and begged attendants to bring her baby to her.

One authority reports the case of a woman who accidentally discovered that by listening to certain types of music â€¢ she could control her periodic spasms of epilepsy. Once, when she felt an attack coming on, a friend started to play the piano. To her amazement the spasm failed to develop. Now, whenever she feels the approach of the telltale symptoms, she takes a “dose” of music, and has never had a serious attack since she made this discovery.

Psychiatrists, surgeons, dentists, and other experts are using music in many odd ways, and with astonishing results. Dr. L. S. Bender, of Bellevue Hospital in New York City, reports cases of mentally deranged children whose fits of violence have been quickly ended by music. Dr. A. F. Erdman of the Brooklyn Eye and Ear Hospital, has quieted patients being operated on under a local anesthetic, by having them wear earphones and listen to the recorded strains of some musical selection. A number of dentists are using this method to drown out the noise of the drill and overcome the tenseness and fear of nervous patients. And in one instance on record, a man rejected a local anesthetic in favor of music played by himself on a harmonica, while surgeons probed for a bullet lodged in his thigh. Students of musical therapy do not agree as to the exact way in which music affects us. Some believe that sound vibrations have a direct physical effect, while others see a connection only through nerves and emotions. Dr. George W. Crile, the great surgeon, attributes music’s medical value to the fact that a great many diseases are caused by strained emotionsâ€”worry, fear, or intense excitement. Music, he believes, relieves this nervous tension, and thereby contributes to the patient’s recovery.

Few deny the enormous power that music can exert, although certain musical instruments and musical selections may cause different reactions in different people. Thus, while the steady beat of a drum may soothe some people, it excites others. The throaty moan of an oboe has been known to make a person temporarily insane, slow chants often have a hypnotic effect, and a lullaby has more than once quieted a serious heart flutter.

William van de Wall, Holland-born American expert on musical therapy, has for years been demonstrating the beneficial effects of music in the treatment of rebellious prisoners and dangerous maniacs. On one occasion, he walked boldly into the violent ward of a mental hospital, armed only with a small portable organ. One patient, a tall, powerfully built man who had to be constantly watched, proved to have an excellent voice, and began to sing along with the organ. Soon, he was promising to control himself if allowed to sing once a week. Within a few months, he was moved out of the violent ward, and finally he was dismissed from the hospital, a man restored to sanity through music.

Music is even invading industry. Realizing that rhythm and melody can counteract boredom and monotony, many manufacturers have installed sound systems in their plants to keep up the morale, support the vitality, and increase the efficiency of their manual workers. In London, recently, two experimenters discovered that during the time a phonograph played light orchestral music, the output of 355 packers in a cracker factory increased eleven percent.

Thus, music is being used as a practical aid in treatment of mental quirks and physical ailments, and as a potent stimulant to working efficiency. So enthusiastic is one expert over the possibilities of musical cures, that he prophesies the day when the portable phonograph and a kit of selected records may become as indispensable to the family physician as the stethoscope and bag of common medicines.