Of course the first thing that came to mind when I saw this article was: “I drink your milkshake” 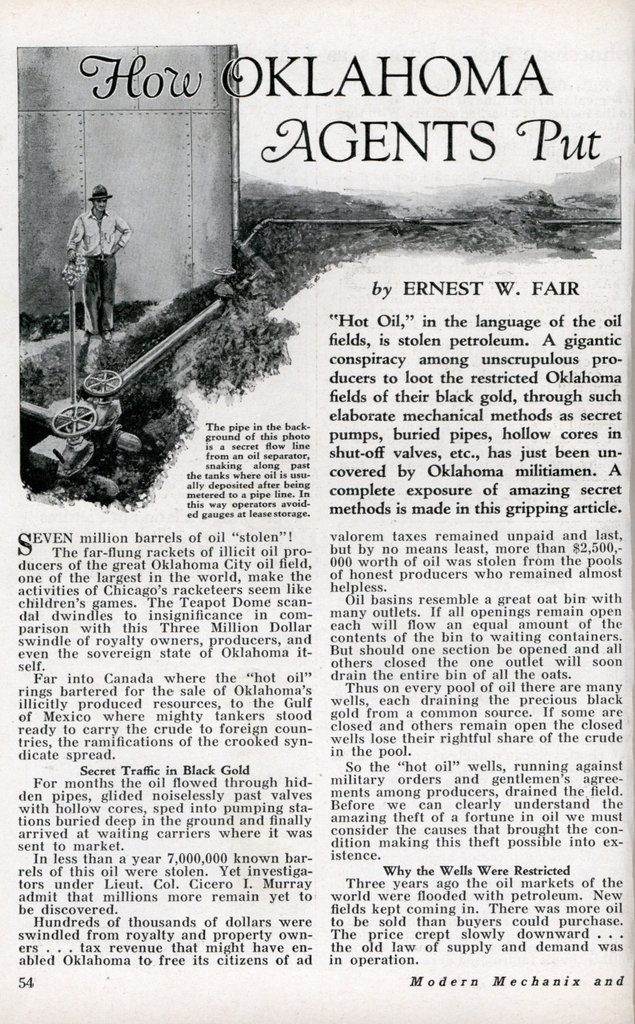 How Oklahoma Agents Put Hot Oil On the Spot

“Hot Oil,” in the language of the oil fields, is stolen petroleum. A gigantic conspiracy among unscrupulous producers to loot the restricted Oklahoma fields of their black gold, through such elaborate mechanical methods as secret pumps, buried pipes, hollow cores in shut-off valves, etc., has just been uncovered by Oklahoma militiamen. A complete exposure of amazing secret methods is made in this gripping article.

The far-flung rackets of illicit oil producers of the great Oklahoma City oil field, one of the largest in the world, make the activities of Chicago’s racketeers seem like children’s games. The Teapot Dome scandal dwindles to insignificance in comparison with this Three Million Dollar swindle of royalty owners, producers, and even the sovereign state of Oklahoma itself.

Far into Canada where the “hot oil” rings bartered for the sale of Oklahoma’s illicitly produced resources, to the Gulf of Mexico where mighty tankers stood ready to carry the crude to foreign countries, the ramifications of the crooked syndicate spread.

For months the oil flowed through hidden pipes, glided noiselessly past valves with hollow cores, sped into pumping stations buried deep in the ground and finally arrived at waiting carriers where it was sent to market.

In less than a year 7,000,000 known barrels of this oil were stolen. Yet investigators under Lieut. Col. Cicero I. Murray admit that millions more remain yet to be discovered.

Hundreds of thousands of dollars were swindled from royalty and property owners . . . tax revenue that might have enabled Oklahoma to free its citizens of ad valorem taxes remained unpaid and last, but by no means least, more than $2,500,- 000 worth of oil was stolen from the pools of honest producers who remained almost helpless.

Oil basins resemble a great oat bin with many outlets. If all openings remain open each will flow an equal amount of the contents of the bin to waiting containers. But should one section be opened and all others closed the one outlet will soon drain the entire bin of all the oats.

Thus on every pool of oil there are many wells, each draining the precious black gold from a common source. If some are closed and others remain open the closed wells lose their rightful share of the crude in the pool.

So the “hot oil” wells, running against military orders and gentlemen’s agreements among producers, drained the field. Before we can clearly understand the amazing theft of a fortune in oil we must consider the causes that brought the condition making this theft possible into existence.

Why the Wells Were Restricted.

Three years ago the oil markets of the world were flooded with petroleum. New fields kept coming in. There was more oil to be sold than buyers could purchase. The price crept slowly downward . . . the old law of supply and demand was in operation.

Royalties are based on a percentage of the selling price of the oil; so too are state gross production taxes. As prices came tumbling down so also went not only profits to producers but royalties to oil owners and taxes to the state.

The state of Oklahoma saw its natural resources being thrown away. From $4 a barrel the price dropped to $2 and finally to $1.

And then one of the largest fields ever discovered came in . . . the new Oklahoma City field with undreamed of quantities of the highest grade crude gushing across the tops of the giant derricks.

The new flood of oil sent prices even lower. So proration was born. Under its rulings the oil buyers came to the Oklahoma state corporation commission each month. They told how many barrels of oil they would take at the current price. Governor William H. Murray had closed every well in the state by executive order, placed them under the guidance of a field umpire. The Corporation Commission divided the orders among the wells and each was allowed to produce only its share.

Thus with the birth of proration the nefarious plans of the crooked oil producers began to ferment.

At first all went well. Then came a mighty flood of oil from a new field in East Texas sending prices downward beyond control. Producers chafed under the rulings that held their production down. Some ran their wells in open defiance of the commission allotments so that they might sell the crude at any price.

Once more Governor Murray acted. He placed the fields under martial law, ordering his cousin Lieut.-Col. Cicero I. Murray to take charge.

Honest producers found their wells weakening . . . they knew that somewhere in the field someone was producing oil illegally . . . the market reports showed clearly that more oil was coming onto the market than records showed had been produced.

But where was it coming from and how was it being produced?

Militiamen with loaded rifles and fixed bayonets patrolled every well in the field. None were apparently operating without Corporation Commission permits.

Secret investigators went to work. Highly trained engineers under Col. Murray used every instrument known to modern science to unearth the secret producing and transporting methods that all knew existed. A highly complicated spy system searched into every known record, listened in on secret conferences and employed every artifice known to man to bring to justice the men whose thievery knew no bounds. It was war! War against crime . . . neither the Governor nor his cousin knew what failure meant . . . night and day their men worked delving into the secrets whose discovery would bring to light the million-dollar criminals.

Hidden lines were discovered . . . crews of laborers dug these lines up night and day, but they seemed to lead nowhere. A maze of pipes confronted the investigators. Engineers were called in and finally the hidden lines were traced . . . new secrets were unearthed . . . hidden rooms dug beneath the surface of the ground were discovered. The methods of the “hot oil” syndicates were slowly unearthed and made public. It was an amazing story almost impossible of belief. In the beginning the crooked producers had laid only the secret lines, hiring workers at night, confusing these laborers in the operations so that even they could not remember where the lines were laid.

To get the oil to distant loading racks underground control rooms and pumping stations were built. Lines were laid into the very cellars of some of the wells and in one or two instances producers were daring enough to make the connections in the well-cellar direct into the string of the flow casing.

Wells belonging to the illicit producers had been rigged for transportation of the “hot oil” long before they were brought in. Highly paid crews labored under cover of night to lay the lines.

Under ordinary conditions oil is brought to the surface by gas volume. It goes into a device called a separator which separates the gas from the oil, then into a flow tank where the sand and impurities are dropped to the bottom, then to a stop tank. A pump picks up the oil at the stop tank and forces it into a pipe line by which it is delivered to its destination which may be a huge storage tank, refinery, or railroad car-loading rack.

Under military supervision meters bad been attached to the pumps, storage tanks, pipe line connections and at the point of delivery.

Meters and producing systems meant little to the “hot oil” producers. One company used a large rubber hose attached to a secret pipe at the bottom of one of its stop tanks to pick up oil with a secret pump when the well apparently was shut down.

Others put by-passes on the wells while they were being connected for final completion. One flow line went to the battery of tanks and the other went directly to the hidden pipe lines.

On one well the operators built a special pipe line two miles long. At the end of the line a suction pump sucked the oil out of the wells. Usually it is boosted by gas pressure.

Down under the ground four or five feet pipes had been laid around the stop tanks taking the “hot oil” straight from the separator and carrying it by secret electric pumps into pipe lines or to fake refineries.

The discovery of the first lines made through unceasing work on the part of Col. Murray and his investigators led to the ready discovery of even more complicated and intermingled lines, so dexterously laid that even the crews who dug them out could not figure either where they came from or what their destination might be.

Not only had underground control rooms and pumphouses been unearthed but valves whose cores were bored out so that when closed by the screws on the outside they continued flowing were discovered.

Even innocent – appearing pumphouses were so built as to camouflage secret equipment. False walls hid electric centrifugal pumps operating almost silently. Double walls of pumphouses were found so constructed as to absorb all noise or vibration. Military officers in one instance discovered electric connections between the secret pumps and the pumphouse doors. When inspectors opened the doors the connections automatically disengaged the secret pumps.

Everything looked all right and the inspectors went on to the next well, while the producer chuckled.

Thus millions of barrels of oil were stolen until the methods of the “hot oil” producers were discovered. Now military guardsmen patrol the outlaw wells while investigators dig deeper into the field searching for more and more hidden lines and ingenious devices.

One thing is certain . . . there will be no more stolen oil taken from the Oklahoma City field. The methods of the men who stole more than 7,000,000 barrels of oil and thousands of dollars in taxes, many more in royalties and over two millions of dollars from producers, have been destroyed.