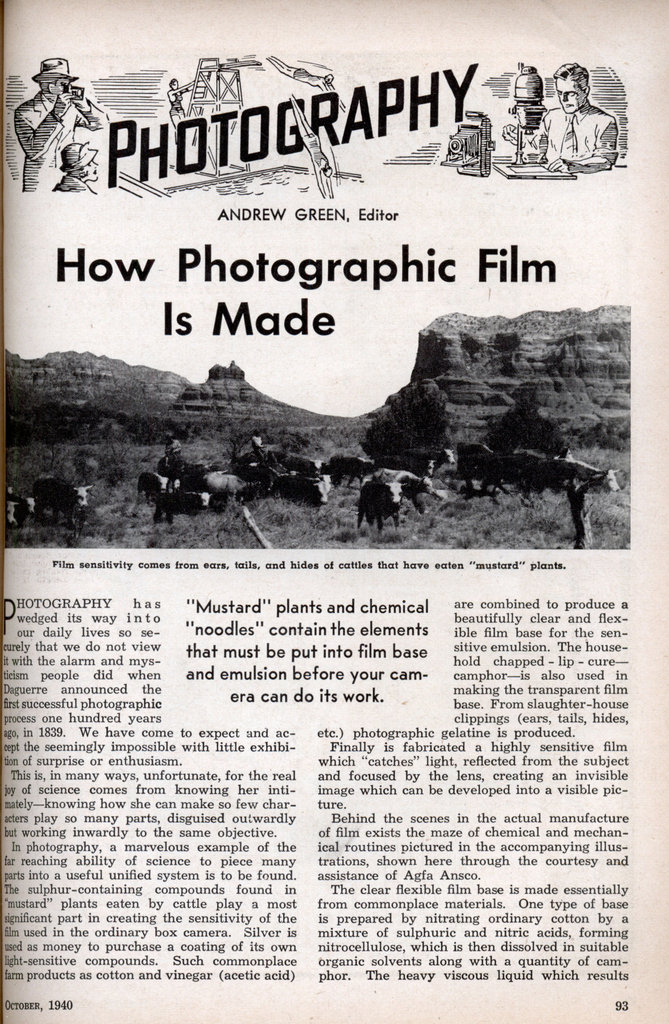 In photography, a marvelous example of the far reaching ability of science to piece many parts into a useful unified system is to be found. The sulphur-containing compounds found in “mustard” plants eaten by cattle play a most significant part in creating the sensitivity of the film used in the ordinary box camera. Silver is used as money to purchase a coating of its own light-sensitive compounds. Such commonplace farm products as cotton and vinegar (acetic acid) are combined to produce a beautifully clear and flexible film base for the sensitive emulsion. The household chapped – lip – cureâ€” camphorâ€”is also used in making the transparent film base. From slaughter-house clippings (ears, tails, hides, etc.) photographic gelatine is produced.

Finally is fabricated a highly sensitive film which “catches” light, reflected from the subject and focused by the lens, creating an invisible image which can be developed into a visible picture.

Behind the scenes in the actual manufacture of film exists the maze of chemical and mechanical routines pictured in the accompanying illustrations, shown here through the courtesy and assistance of Agfa Ansco.

The clear flexible film base is made essentially from commonplace materials. One type of base is prepared by nitrating ordinary cotton by a mixture of sulphuric and nitric acids, forming nitrocellulose, which is then dissolved in suitable organic solvents along with a quantity of camphor. The heavy viscous liquid which results is known as “dope,” which is the material used to flow out on heated bands to form the final film base.

A window in the casting machine allows constant watching as the base is produced. The “dope” flows onto a continuously moving band which carries the thin coating through a drying cabinet before the base is finally wound up, ready for coating with the emulsion. As the rolls wind up, the film base passes small metal chains which carry away static electricity.

From cattle comes gelatine. Ears, tails, and hides are used for gelatine extraction. Gelatine is located directly beneath the epidermis. First run gelatines are used for photographic purposes; second runs for food stuffs; and third runs for glue. The “mustard” plants eaten by cattle contain sulphur compounds which are found in minute quantities in the gelatine extractions. If it were not for these minute impurities, photographic emulsions would have practically no sensitivity. Emulsions prepared with gelatines made from rabbits, an animal which does not eat the mustard plant or other “hot” plants, show little sensitivity. The preparation of photographic emulsions is an unique procedure that is both an art and a science. Much technical knowledge is required, besides extensive experience. Every raw material is tested chemically and practically through laboratory tests and in the preparation of trial emulsions. Gelatine is allowed to soak in water and then is heated carefully to the melting point. Calculated amounts of soluble chlorides, iodides and bromides are added to one quantity of gelatine-solution while a known amount of silver nitrate is added to a second quantity. When these two solutions are mixed, a suspension of sensitive silver compounds is formed which is poured into chilling trays where it is cut into cubes (called “noodles”) for washing. When completely washed of reaction byproducts, the “noodles” are melted again, before coating onto the film base.

Full width rolls of film are closely examined and any possible defects are noted.

Rolls of finished film, enclosed in light-tight cases are racked up to await their call by the slitting department, where a machine cuts the film into proper widths.

All of these operations are complicated by the fact that they must be carried on in total or almost total darkness.

Trained girls guard film quality by carefully examining sheets of cut film with special safe-lights to detect any possible physical defects. Every sheet of film is examined in this manner. Motion picture film, in long reels, is run over a safelight, in similar fashion.