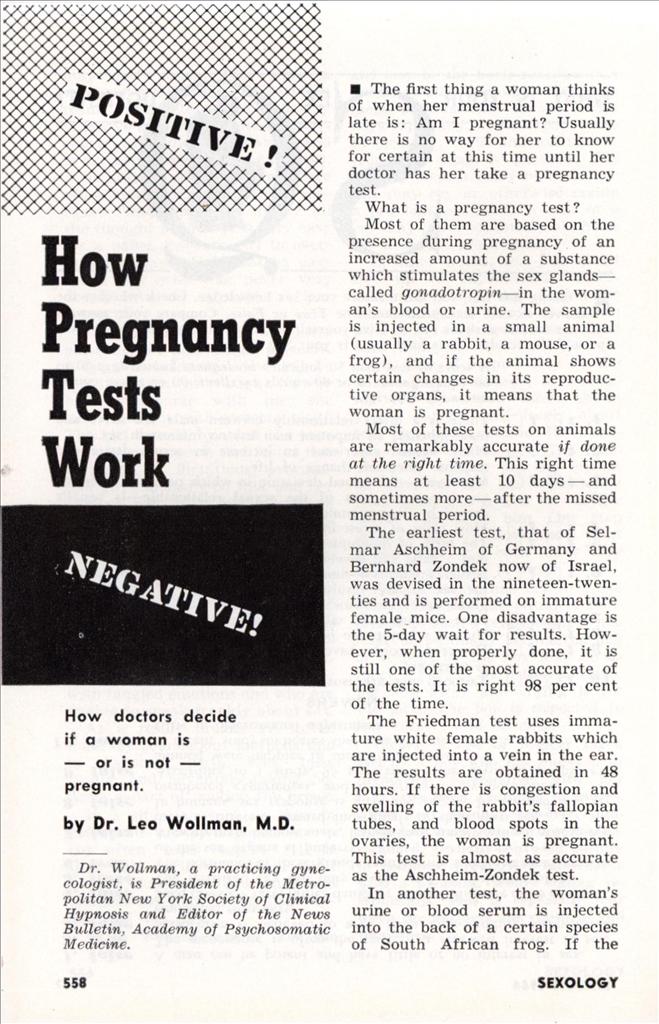 Most of these tests on animals are remarkably accurate if done at the right time. This right time means at least 10 days — and sometimes more—after the missed menstrual period.

The earliest test, that of Selmar Aschheim of Germany and Bernhard Zondek now of Israel, was devised in the nineteen-twenties and is performed on immature female mice. One disadvantage is the 5-day wait for results. However, when properly done, it is still one of the most accurate of the tests. It is right 98 per cent of the time.

The Friedman test uses immature white female rabbits which are injected into a vein in the ear. The results are obtained in 48 hours. If there is congestion and swelling of the rabbit’s fallopian tubes, and blood spots in the ovaries, the woman is pregnant. This test is almost as accurate as the Aschheim-Zondek test.

In another test, the woman’s urine or blood serum is injected into the back of a certain species of South African frog. If the

woman is pregnant, the frog will produce eggs within 4 to 12 hours. The obvious advantage of this method is its speed. It is accurate about 95 per cent of the time. One disadvantage of this test is the fact that sometimes it will give what is called a false negative result: that is, it will indicate that the woman is not pregnant, when she actually is.

Another pregnancy test, known as the Galli-Mainini reaction, uses as a test animal a male frog. Here again urine is injected into the frog. A positive result is the production of sperm.

Another test for the rapid diagnosis of pregnancy is based on the excess of blood produced in the ovaries of immature white rats in 2 to 24 hours following injection of urine from a woman who is pregnant This is known as the Frank test, and is popular because of its rapidity and ease of performance.

The Ortho test and the Pregnosticon test are based on mixing the urine of the female patient with a special serum prepared from rabbits.

These pregnancy tests actually indicate the presence of large amounts of gonadotropin, not necessarily pregnancy. There are several conditions which will produce in women a positive reaction without pregnancy. These include the menopause in women, who sometimes produce enough hormone at that time to give a weakly positive reaction. If the test is repeated using a smaller quantity of blood or urine, such false positives can usually be distinguished from the real thing.

Another condition giving false positive reactions is the presence of certain tumors. There is even a certain kind of rare tumor of

the male testicles which ran cause a man’s blood or urine to give a “positive” pregnancy test result! Positive tests are also sometimes obtained in tumors of the pituitary gland and in thyroid gland disorders, but these are extremely rare.

A false negative test for pregnancy may be obtained if the test is done too early—within 10 days of the missed period—or if the unborn baby has died in the womb. Pregnancy test results may remain positive for several days to a week after the death of the fetus.

Of all the animal tests in common use, the rat test appears to be the most reliable, according to the statement of a leading clinical expert in New York City.

Oral pregnancy tests, using progesterone-type drugs, are coming into popular use at the present time. The basis for these tests is the knowledge that, in pregnancy, progesterone, a sex hormone produced by the yellow body in the ovary, helps the womb lining to strengthen and thicken in prepararation for the developing unborn child. This is what causes menstruation and menstrual bleeding to stop when a woman becomes pregnant.

Thus, the giving of progesterone or its equivalent to a patient who is normally pregnant will provide

additional support to this womb-strengthening. On the other hand, the discontinuance of the drug in a patient who is not pregnant will withdraw her sole womb support and bleeding will result. This use of drugs makes it possible to distinguish between a missed menstruation due to pregnancy and that due to other causes.

This test is not as clearcut as the “animal” tests but it has the advantage of being inexpensive and convenient. It also can be used as soon as a menstrual period is missed.

The method of use is to take progesterone-type tablets for 3, 4 or 5 days, depending on the brand. If pregnancy is present, no bleeding ensues when the drug is stopped. If the patient is not pregnant, bleeding results within two or three days. This test is 95 per cent accurate.

A final pregnancy test is the cervical mucus test. This is not a specific test for pregnancy but is based on the fact that the activity of the “pregnancy hormone” progesterone results in cell changes in the mucus of the cervix, or womb-mouth.

Thus, it is clear that while the ideal pregnancy test has not yet been achieved by medical science, we do possess tests that can indicate pregnancy quickly and with great accuracy.

—————
Dr. Wollman, a practicing gynecologist, is President of the Metropolitan New York Society of Clinical Hypnosis and Editor of the News Bulletin, Academy of Psychosomatic Medicine.