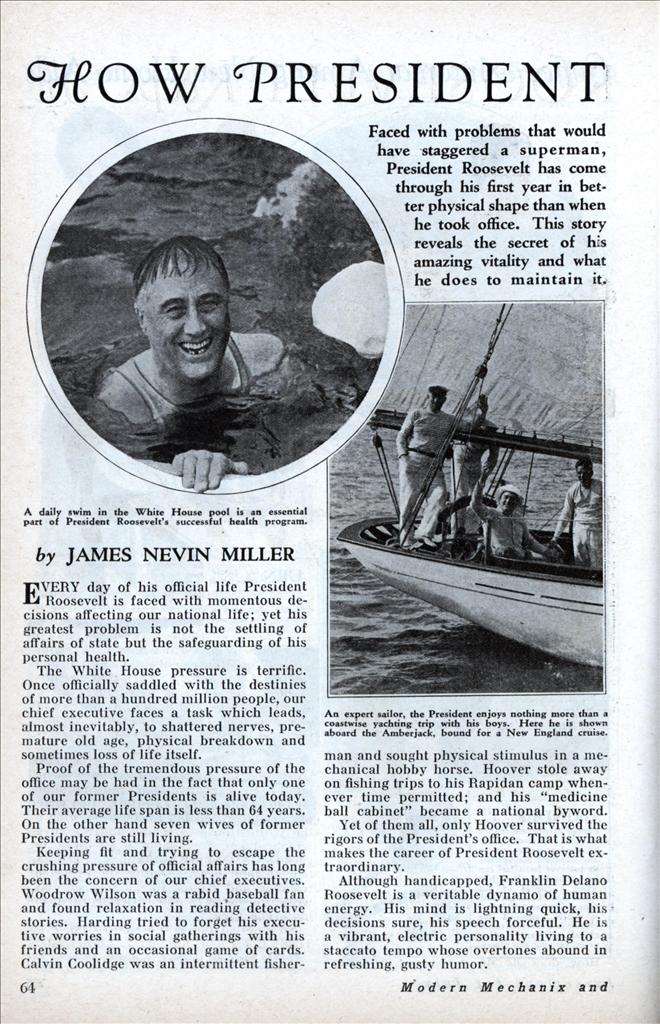 Faced with problems that would have staggered a superman. President Roosevelt has come through his first year in better physical shape than when he took office. This story reveals the secret of his amazing vitality and what he does to maintain it.

EVERY day of his official life President Roosevelt is faced with momentous decisions affecting our national life; yet his greatest problem is not the settling of affairs of state but the safeguarding of his personal health.

The White House pressure is terrific. Once officially saddled with the destinies of more than a hundred million people, our chief executive faces a task which leads, almost inevitably, to shattered nerves, premature old age, physical breakdown and sometimes loss of life itself.

Proof of the tremendous pressure of the office may be had in the fact that only one of our former Presidents is alive today. Their average life span is less than 64 years. On the other hand seven wives of former Presidents are still living.

Keeping fit and trying to escape the crushing pressure of official affairs has long been the concern of our chief executives. Woodrow Wilson was a rabid baseball fan and found relaxation in reading detective stories. Harding tried to forget his executive worries in social gatherings with his friends and an occasional game of cards. Calvin Coolidge was an intermittent fisher- man and sought physical stimulus in a mechanical hobby horse. Hoover stole away on fishing trips to his Rapidan camp whenever time permitted; and his “medicine ball cabinet” became a national byword.

Yet of them all, only Hoover survived the rigors of the President’s office. That is what makes the career of President Roosevelt extraordinary.

Although handicapped, Franklin Delano Roosevelt is a veritable dynamo of human energy. His mind is lightning quick, his decisions sure, his speech forceful. He is a vibrant, electric personality living to a staccato tempo whose overtones abound in refreshing, gusty humor.

President Roosevelt has never missed a single night’s sleep nor experienced anything approaching a nerve crisis. Today, after one of the most exacting years faced by any President since the World War, he is in better shape than when he took office, according to Dr. Ross T. Mclntire, official White House physician.

How does he do it? The President’s formula for keeping fit is simple. Regular hours, regular exercise and temperance in all things are the basis for his code of physical and mental health. To keep his body fit the chief executive rides horseback, swims in the White House pool and takes long auto rides into the country. When time permits, he boards a sea-going yacht for a bit of deep-sea fishing and ocean air, hurries off to his experimental farm at Warm Springs, Georgia, or joins his boys on a carefree, coastwise sailing cruise.

When in Washington, the President’s chief form of physical relaxation is swimming in the executive pool. Built by popular subscription, the beautifully tiled water playground is located in the west wing of the White House extension under a cover which makes it available at all times, regardless of weather conditions. Here, for half an hour every evening, the President Wallows and frolics like a boy at play, while the cares of office literally drip off his broad back.

No chief of the White Houseâ€”not even Teddy Rooseveltâ€”has taken a keener inter- est in the outdoors than the present President. Before illness robbed him of the full use of his legs he was an all-around athlete, enjoying tennis, hunting, iceboating, swimming, baseball and football.

But although the President’s, enormous energy is geared to the production peak of a precision-tooled machine, he does not allow his energy to run away with him. He knows when to work and when to restâ€”a lesson brought home to him in force when in 1921 paralysis struck him down. Deprived of the use of both his arms and his legs and given scant aid from physicians who knew next to nothing about his disease, Roosevelt was forced to work out his own salvation. His subsequent victory was two-fold: physical recovery and a basic knowledge of mental discipline.

Today, a great part of the President’s health program is given over to mental relaxation. He is a great reader, enjoys moving pictures, likes to listen to the radio and is enthusiastic about music, both popular and classical tunes.

Indoor games are one of the President’s favorite methods of relieving mental pressure. He enjoys rummy, solitaire, bridge and parchesi, playing them all with his characteristic gusto, but never worrying about their outcome. The President is also one of America’s leading hobbyists. His stamp collection is noteworthy and his group of ship models and naval paintings and lithographs is one of the most extensive in existence.