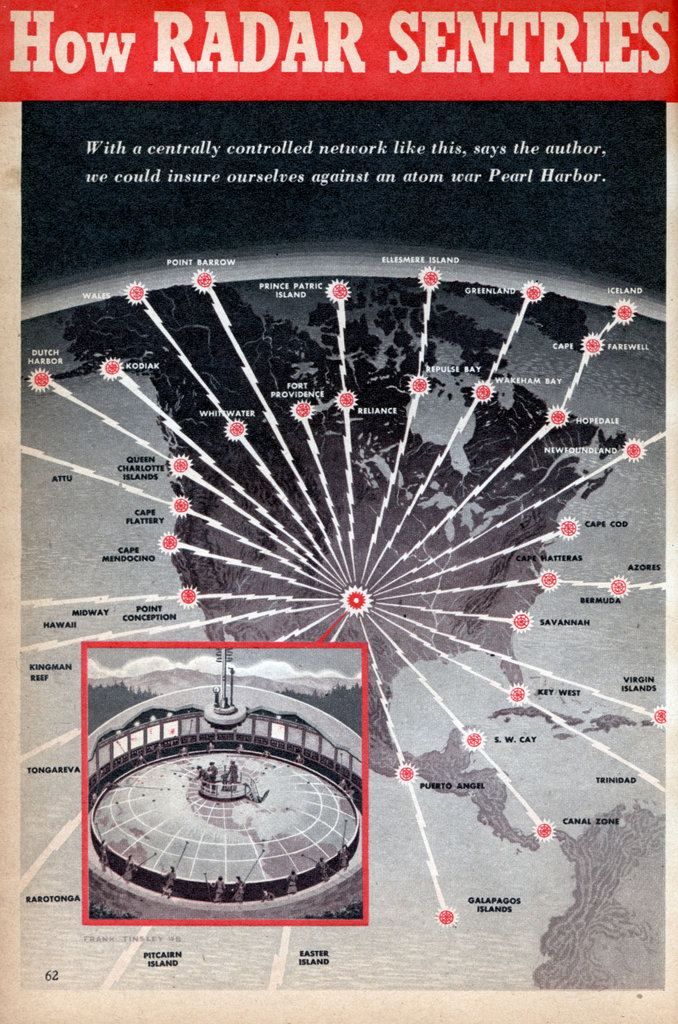 With a centrally controlled network like this, says the author, we could insure ourselves against an atom war Pearl Harbor.

ELECTRONIC watchdogs may save you from atomic destruction!

Just one sneak atom-bomb attack on a single target city would cost thousands of American lives and millions of dollars in vital property. Our only guarantee against such an atomic catastrophe is the creation of a system of overlapping search radars to warn us against approaching disaster.

The advent of 1000-mph raiders and long-range guided missiles cuts the margin of precious warning time. Our sentries must be posted far afield or the confusion caused by large numbers of missiles launched simultaneously could cause a breakdown just as the British spotting system was disrupted by V-2 attacks during World War II.

This type of protection system is being urged by F. H. Lack, chairman of the mobilization committee of the radio industry. He suggests that radar stations be arranged in concentric circles so that their electronic eyes would scan every inch of approach to the continental United States.

The outer ring in the network would be as far flung as our possessions and defense treaties allow. It would detect the movement of long-range bombers and missiles early in their flight. The inner or shoreline ring would pinpoint sneak raids by short-range, submarine – launched missiles or carrier planes.

Radar images picked up by the day-long radar sentries would be sent over a continuous video transmission to a command center where necessary defense measures could be undertaken immediately. The operation commander would dispatch interceptor planes and ground-to-air missiles from any point on the radar ring. The whole setup would be augmented with radio, telephone and teletype communications wherever possible.

Illustrations on the opposite page show possible location points for such a network. Search stations are indicated by red radar aerials on white stars; converging video paths and relays are represented by flashes.

The inset shows one possible layout of the central control post. Placed in a “pulpit” overlooking the situation map are the operations commander and his aides. The map shows the entire search area of the system. And beneath its floor is a communications center through which the commander can talk with any plane, station, base or headquarters in the system.

Around the walls of the circular building are video screens and control panels, each tuned in on a specific radar post. The screens are gridded so that distances between friendly and enemy air units can be computed at any moment. In the gallery, Wacs record movements on the map.

The cost of this network of electronic watch-dogs would be terrific. But in the long run, every dollar spent might well be matched by a life saved.