This is how we end up with killer bees. 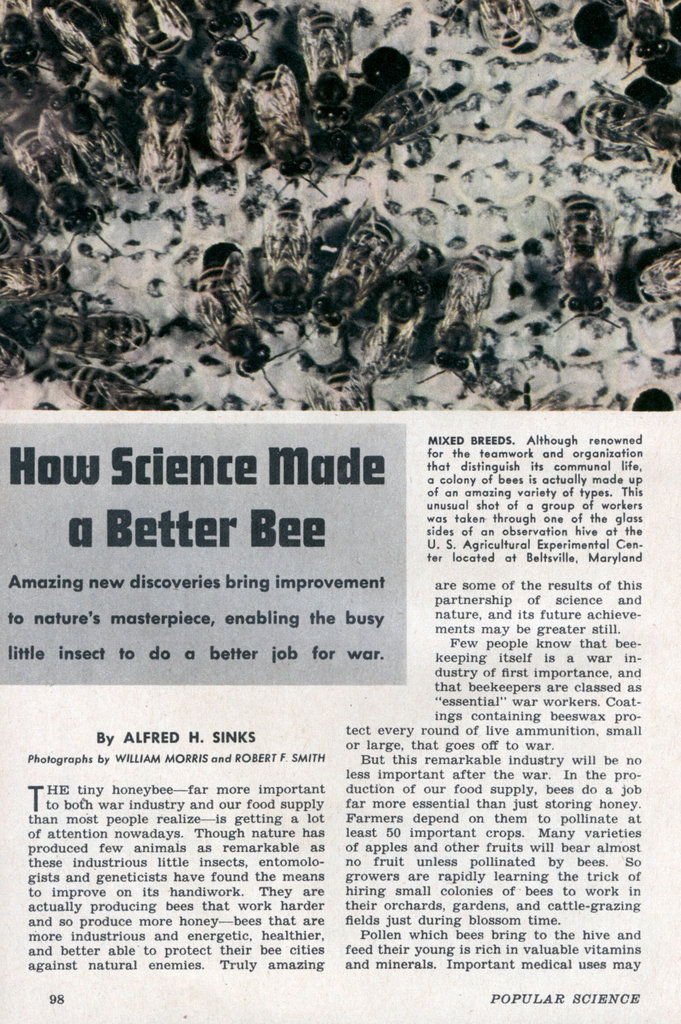 How Science Made a Better Bee

Amazing new discoveries bring improvement to nature’s masterpiece, enabling the busy little insect to do a better job for war.

THE tiny honeybeeâ€”far more important to both war industry and our food supply than most people realizeâ€”is getting a lot of attention nowadays. Though nature has produced few animals as remarkable as these industrious little insects, entomologists and geneticists have found the means to improve on its handiwork. They are actually producing bees that work harder and so produce more honeyâ€”bees that are more industrious and energetic, healthier, and better able to protect their bee cities against natural enemies. Truly amazing are some of the results of this partnership of science and nature, and its future achievements may be greater still.

Few people know that beekeeping itself is a war industry of first importance, and that beekeepers are classed as “essential” war workers. Coatings containing beeswax protect every round of live ammunition, small or large, that goes off to war.

But this remarkable industry will be no less important after the war. In the production of our food supply, bees do a job far more essential than just storing honey. Farmers depend on them to pollinate at least 50 important crops. Many varieties of apples and other fruits will bear almost no fruit unless pollinated by bees. So growers are rapidly learning the trick of hiring small colonies of bees to work in their orchards, gardens, and cattle-grazing fields just during blossom time.

Pollen which bees bring to the hive and feed their young is rich in valuable vitamins and minerals. Important medical uses may be found for it. And the 5,000,000 colonies of honeybees in this country will gather in a single year as much as 350,000.000 pounds of pollenâ€”nearly twice the amount of our annual honey crop!

Because bees Contribute so richly to our comfort, health, and prosperity, and because they are such fascinating creatures in themselves, scientists have long taken the keenest interest in them. There are various basic races among honeybees. Each is distinct from the others in size, color, markings, length of tongue, size of the honey sac, and so forth. For nearly a century man has been trying to learn just what characteristics in bees make for better honey producers. and trying to improve on nature by careful mating of selected queen bees with selected drones.

Entomologists of the Department of Agriculture and state agricultural experiment stations have been trying to put this study on a more scientific basis. This means making careful measurements of the length of the tongues of worker bees, the size of their honey sacs, their weight, and the amount of nectar they are capable of carrying. By comparing these measurements with the honey production of experimental bee colonies, bee experts determine scientifically the relation between the physical characteristics of bees and their usefulness as pollinators and honey producers.

The length of a bee’s tongue is highly important. A bee will not work a flower in which the nectar is too deep inside for her to reach. As a result that variety of plant will suffer from lack of pollination.

American entomologists are far more interested, however, in producing strains of bees that are more energetic, hardier, and more resistant to bee diseases.

A stingless bee has long been sought by beekeepers the world over. But the gentler strains have so far proved to be inferior honey producers, and entomologists consider it a waste of time to try to develop bees that literally have no stings.

How do bee breeders help nature to produce better and better bees? Until recently the only method known was one worked out by European breeders a hundred years ago. They selected the best queens and the best drones and carried them to some isolated spot in the mountains. They wanted to make sure that the queen did not mate with some stray drone of inferior strain.

Such selective breeding has shown truly amazing results. In tests at Madison, Wis., superior strains have produced as much as 250 pounds per colony in a good season over and above their own needs, while colonies of a poor strain often fail to make enough honey even to keep themselves alive through the winter.

Still more remarkable success has rewarded attempts to protect bees from disease. So virulent are the three varieties of foul brood that in a few seasons this bee disease may wipe out every bee colony in an area hundreds of square miles in extent. In the middle thirties the bee industry around Middlebury, Vt., was nearly wiped out by American foul brood. In 1936 a Middlebury beekeeper named Charles Mraz noticed that one of his colonies showed an almost miraculous ability to fight the disease. He shipped an egg-laying queen bee from that colony to the experiment station at Ames, Iowa. Today, seventh-generation descendants of that queen are fighting foul brood to a standstill. They seem able to detect the bacillus larva even before it is visible to the human eye.

The old method of selective breeding got results slowly, but it could never eliminate the element of chance.

But in 1926, Dr. Lloyd R. Watson of Alfred, N. Y., succeeded in fertilizing a selected queen bee artificially. In this way parentage could be controlled beyond a doubt. Watson’s method was taken up and improved by scientists of the Bureau of Entomology.

But one thing still stood in the way of getting practical results. And that one thing baffled the entomologists for 15 years. Because a colony of bees must be strong in numbers to survive, any colony mothered by an artificially mated queen would die out. Such queens never laid enough eggs.

Then, in the spring of 1940, two young American scientists at Baton Rouge, La., discovered that a queen bee makes more than one mating flight in her lifetime. This disproved what bee science had taught for a hundred years. To Otto Mackensen and William Roberts it suggested the idea of multiple mating by artificial means. The theory worked. Queens so treated proved able to lay sufficient fertile eggs to mother a strong colony. This summerâ€”at the Madison, Wis., station, where Roberts now worksâ€”there are, for the first time in history, colonies of bees produced by artificial mating. By the old method, only one new generation could be produced in a year. The new method produces as many as ten.