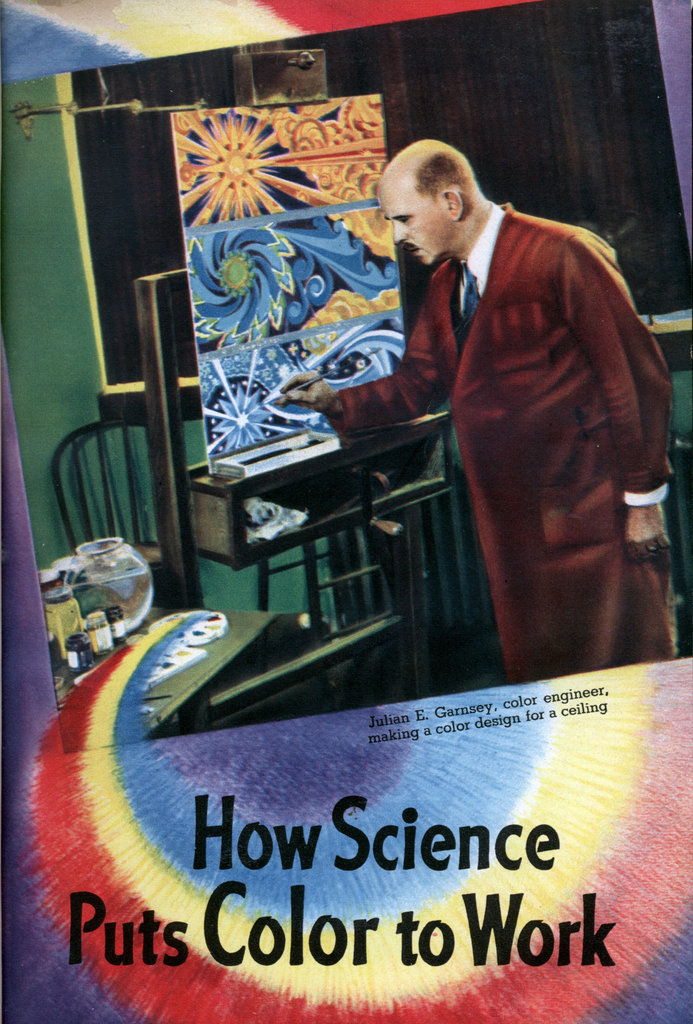 How Science Puts Color to Work

Industry, Business, and Medicine Are Making Use of the Rainbow

AT A western hospital, not long ago, attendants wheeled a patient into the psychopathic ward. He was weak, emaciated, hardly able to speak above a whisper. Doctors were afraid he would starve himself to death.

Nothing was said to change the patient’s mind. He was simply placed in a large room decorated with crimson and scarlet. Twenty-four hours later, he suddenly rang for an attendant and demanded his breakfast. Something in the new, colorful surroundings had stimulated him out of his fit of depression. He was ready to face life again.

In recent years, scientists have learned dramatic new facts about the magic of color â€” facts of value in our daily lives. Business men, advertising experts, and package designers, as well as laboratory workers and psychologists, have added fascinating discoveries to the increasing fund of our knowledge.

For example, when the profit chart in the office of a leading American meat packer took a sudden upward jump, a few months back, officials knew just what was responsible. Incredible as it may seem, it was green sawdust on the salesroom floor!

Not many weeks before, these same officials had been scratching their heads, trying to solve the riddle of why their freshest cuts of- meat were drawing bids below the top prices. Finally, they called in a noted New York color engineer, Faber Birren. One look at the salesroom, and Birren put his finger on the trouble.

“Your walls are yellow,” he pointed out. “The sawdust on the floor is also yellow. When buyers look from this hue to the red meat, the latter appears dark and discolored. Dye your sawdust green and tint the walls blue. In such surroundings, the buyers will see the meat as it is, bright red and fresh-appearing.”

The officials were dubious. But they tried the plan. Hardly a week went by before they were delighted to find that bids were rising. And, today, the company is realizing an average of a quarter of a cent a pound more on its fresh meat simply because it uses green instead of yellow sawdust!

In another recent case, a manufacturer of asbestos shingles boosted his profits more than half a million dollars in one year by adding a slight amount of purple to his dye. Frederic Rahr, an eastern color expert, suggested the change.

Experimental biologists, carrying on researches with birds, fish, animals, and insects, have added remarkable discoveries to the lore of color. They have noted odd preferences among wild creatures and startling effects of color on their lives. Starlings, for example, are stimulated to breed by red light. Bees, although color-blind to red, can see ultra-violet rays invisible to our own eyes. Humming birds, which are found only in North and in South America, prefer red and yellow flowers. Consequently, because these birds carry pollen from bloom to bloom, certain families of plants to which the birds are particularly partial have more red and yellow flowers in the Americas than in any other part of the world.

In France, some years ago, a scientist lined a large box with squares of varicolored paper. Day after day, he counted the number of flies resting on each color. Most of the insects preferred green. Next in order of choice came yellow, azure, red, and ultramarine, or bright blue. His researches had a practical consequence, for the walls of French and Dutch slaughterhouses are now often painted bright blue to discourage flies.

Another discovery in connection with color and insects is finding application in the orchards and orange groves of California. Entomologists noted that night-flying moths fluttered in greater numbers around blue neon signs than around glowing tubes of any other color. So the electric insect traps in. California orchards are now being decked out with blue and purple “stop lights” for the bugs that infest the trees.

In various other fields, color research is tackling new jobs. Package designers have found that a skillful use of colors will create the impression that one container is larger than another, though they are exactly the same size. Baseballs that are tinted yellow have been found to be more easily seen against the sky and actually to look larger than the conventional white ones. Such balls are now optional with the umpire in many major-league games. Nearly two centuries ago, a paint manufacturer introduced red paint for barns on the theory that such a coating made the buildings warmer in winter. Science has substantiated his contention. It is now well known that light hues reflect heat waves from the sun, while dark shades absorb them. Hence, we wear light-colored clothes in summer and darker fabrics in the

months of cold, when the warmth is welcome. A striking application of this knowledge recently enabled members of a polar expedition to keep drinking water from freezing while they worked their way across fields of arctic ice. All their water bags were painted black. During the day, these containers absorbed sufficient heat from the sun to raise the temperature of the fluid inside to sixty degrees F., at times when the air outside was as cold as twenty degrees below zero.

Even when the thermometer in a modern building indicates a constant temperature, office workers in some rooms often feel chilly while those in other rooms feel hot. The cause of this paradox is the color scheme used in decorating. A remarkable example of this fact occurred, some years ago, in a large office in New York City.

During the summer, the walls were repainted. In place of a warm cream yellow, they were tinted slate blue. As soon as winter came, the stenographers began to complain of feeling chilly. They started wearing sweaters and wraps to work in spite of the fact that thermostat records showed that the temperature in the room was just as high as it had been in previous years. The average room temperature had to be raised three or four degrees before the workers felt comfortable. The following summer, the office was redecorated in cream yellow and the trouble disappeared. Thus, a different color on the walls literally was equal to three or four degrees on the thermometer!

From Europe, early last summer, reports reached the United States that fiendish “insanity cells” had been used to shatter the nerves of war prisoners in Spain. Captured soldiers were pushed into odd-shaped rooms with fantastic designs painted in jarring, brilliant colors on the walls. In addition, rays of harsh-colored lamps played incessantly over them during their confinement. A complete mental breakdown was the aim of this diabolical “design for insanity.”

That color alone can produce profound changes in the mind is now widely recognized in medicine. The western hospital that induced a patient to quit a hunger strike by placing him in a red-walled room is but one of many institutions employing similar methods. One noted Swiss hospital, in fact, has a whole series of “rainbow solariums.” Each of these sun rooms is inclosed in tinted glass, and each shade is employed in the treatment of a specific mental ill.

In some nervous disorders, psychiatrists report, gaudy color schemes seem to act as a stimulant to the systems of the patients. Hypersensitive, neurotic people, on the other hand, are soothed by blue. When you are nervous and overwrought, a calming color is spring green. And, when you are sleepless and troubled by headaches, anemone mauve or firmament blue is prescribed.

One young woman, subject to fits of recurring melancholy, finds relief by entering a room equipped with red lights as soon as the “blues” come on. She remains there until she feels the stimulation of the color. Then, in another room decorated with vivid tones of yellow and gold, she “tapers off” until her normal state of mind returns.

Of all the manifold uses of color for producing mental states, the most dramatic is probably one reported from London, England. For years, the Whitechapel span over the Thames River was known as “suicide bridge.” It was a favorite place for unfortunates to end their lives by leaping into the river below. In an effort to reduce the number of these fatal plunges, city officials ordered the bridge painted a soft and soothing shade of green. Almost as soon as the change in color scheme was carried out, suicides at the bridge began to decrease.

Another bit of color magic is a feature of many up-to-date hospitals. Waiting rooms are being decorated with calming, soothing hues. This lessens the strain for relatives waiting during an operation or at times when patients are passing through a crisis.

Thus the work of the modern color expert ranges all the way from tinting baseballs to make them more visible, to camouflaging war machines; from stepping up the sale of asbestos shingles, to curing maladies of the mind; from luring insects into electric traps, to imparting a holiday mood to visitors at

a summer resort. The province of these scientists is a rapidly expanding field of research. Discoveries already made have given us glimpses ahead, letting us visualize the manifold ways in which an increasing knowledge of color will affect our daily lives in future years. They indicate that in the world of tomorow color will not be merely an incidental adornment, but a powerful tool in the hands of the physician, the psychologist, and the industrial designer for making human life happier and more satisfying.