Popular Science
Issue: Nov, 1970
Posted in: Aviation, Crime and Police
4 Comments on How Science Will Foil the SKYJACKERS (Nov, 1970)

How Science Will Foil the SKYJACKERS (Nov, 1970) 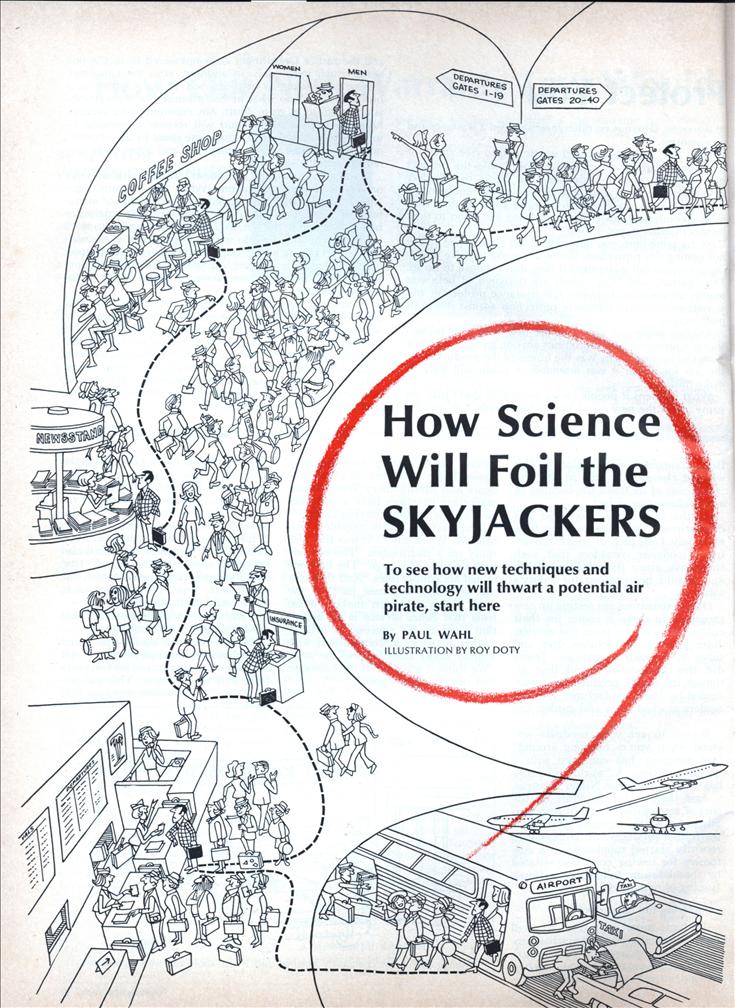 How Science Will Foil the SKYJACKERS

To see how new techniques and technology will thwart a potential air pirate, start here

Ninety-seven passengers showed up for the flight, but 96 were on the Miami-bound plane when it took off from a New York airport one recent evening. Left at the gate, in the custody of two deputy U.S. marshals, was a gun-toting traveler. They nailed him after the loaded .38 revolver in his shoulder holster triggered a new weapons detectorâ€”one of the ingenious countermeasures devised by science to keep in-flight crime from getting off the ground.

Since 1968, when it became epidemic, the chronic disease of air piracy has grown into a worldwide problem of frightening proportions. Being aboard a plane shanghaied to Havana by an individual with a grudge is bad enough; being held hostage by terrorists who skyjack your plane as a form of political blackmail, as in the recent spate of Mideast incidents, is far worse.

The only real defense now at hand is the anti-hijacking system developed last year by a special task force of the Federal Aviation Administration and currently used by several U.S. airlines. How can it stop a potential air pirate before he can board the plane? The technique is illustrated on these pages.

The personal approach. This anti-hijacking system relies heavily on behavioral screening of passengers. Psychological studies by the FAA’s Office of Aviation Medicine show that skyjackers have certain behavior patterns, readily spottable with simple techniques. Since general awareness of these behavior-detection procedures might ruin the system’s effectiveness, the details are closely guarded.

New Orleans International Airport was the first at which all commercial flights were screened for potential air pirates. Specially trained observers, posted in various parts of the terminal or circulating in the crowd, watch passengers for signs of skyjacker behavior. When a suspicious character is spotted and reported, airport offi cers ask him to walk through one of 13 weapons-detection stations.

If he is carrying a mass of ferrous metal that could be a concealed weapon, a blue light flashes and a dial indicator jumps. The suspect is then interviewed and asked to identify himself and produce the metallic object. Should he refuse to cooperate at any point, he is denied boarding privileges. Deputy U.S. marshals make a personal search of the suspect and arrest him if he is armed.

Some airlines, at other airports, use the FAA anti-hijacking system on a limited basis (not all flights are covered), with a slightly different weapons-screening procedure. At the boarding gate, all passengers for a given flight must walk single file through a weapons-detection station. If a passenger, previously spotted as fitting the skyjacker behavioral pattern, also triggers the weapons detector, he is detained.

Reportedly, no U.S. flight whose passengers were given this preboarding screening has ever been skyjacked. Operation of the system, however, seems to be a sometime thing with U.S. airlines that have adopted it. In each of several recent incidents of air piracy, it was explained that the anti-hijacking system was not in use on that particular flight.

The weapons detector. In the FAA system, this is a magnetometer specially adapted as a walk-through station. It consists of a monitor connected to two detector “towers”â€”slender aluminum poles 72 inches highâ€”at either side of a passage 36 inches wide. Inside each tower are four sensors (magnetic detectors).

Unlike other metal detectors, this magnetometer is a passive deviceâ€”it generates no energy of its own. Any iron or steel object between the towers creates disturbances in the earth’s magnetic field, which, together with the field radiating from the ferrous mass, are sensed by the detectors and transmitted to the monitor control. Signals amplified by the monitor power supply drive a meter read-out and trigger an alarm circuit to flash a blue light.

The magnetometer is fine-tuned to detect weapon-size masses of ferrous metal. It cannot, however, discriminate between a concealed weapon and an innocent iron or steel item of like mass.

All-metal detectors. In Japan, they’re installing a home-grown weapon detector, the Densok Magnetic Eye, at airline boarding gates. First used by Japan Air Lines at Tokyo International Airport last July, it is an active-field all-metals detector. Passengers walk through a rectangular pipe frameâ€”39 by 94 inchesâ€”that is actually a coil creating a weak electromagnetic field. If any metal object of a size within the system’s sensitivity range is carried through, it will vary the inductance of the detector coil and trigger the alarm unit.

Mounted on the ceiling above the detector, the alarm unit has three red lights like the stop signals on a car.

One lamp lit indicates a knife; two lamps, a pistol; three lamps, a large firearm such as a shotgun. In each case, of course, it might be some other metal object of equal size.

A product of the Densoku Measuring Instrument Works, Tokyo, the Densok Magnetic Eye costs $1,200 in Japan.

Its two detection pillars, six feet high and 33 inches apart, flank the departure gate. Any metal object brought into its magnetic field is measured by the detection pillars, whose signal is converted by the amplifier into a meter reading and visual/audio alarm.

Location of the metal object on a subject’s person is indicated by a flashing red signal light ( there are four) at the appropriate level on one of the detection pillars and by illumination of the corresponding area of a human figure outlined on an adjacent screen. In addition, an alarm sounds. These simultaneous signals are triggered at a predetermined level of calibration for a weapon-size metal object.

Since the Densok and Diver weapons-screening devices are sensitive to nonferrous as well as ferrous metals, it would seem that its false-alarm rate may be even higher than that of the magnetometer, which detects only steel (the usual weapon metal) and iron. Neither the active-field metal detector nor the passive magnetometer can tell a weapon from a piece of harmless hardware of the same size. There is, however, a new detection system that doesn’t share this shortcoming.

The X-ray eye. In Mahwah, N.J., at the Philips Broadcast Equipment Corp., I was given a preview demonstration of their short-pulse X-ray detection system.

An ordinary overnight bag was packed with clothing, a shaving kit, a bookâ€”and a revolver. The bag was shoved into the slot of a mock-up airline check-in counter, a button was pushed, and an X-ray image of the bag and its contents instantly appeared on a TV monitor screen. The picture was remarkably sharp and clearâ€”there was no mistaking the revolver. Results with other luggage containing a simulated dynamite bomb were equally impressive.

Here’s how this short-pulse X-ray technique works: The weak momentary image on a fluoroscope-type screen is viewed by a TV camera having a light-boosting image intensifier (similar to those in the Army’s night-vision Starlight Scope) ahead of the camera tube. Electronic switching is used to trigger the recording of one TV frame on a video recorder during the period of peak image level. The stored frame is then viewed directly on a TV monitor.

Exposure time is 50 nanoseconds (50 billionths of a second) and the radiation required to produce these images is approximately 0.2 milli-roentgen. This is harmlessly small-well below the level of radiation you receive daily from naturally occurring sources in the environment. Incidentally, unlike conventional X ray, this short-pulse, extremely low-dosage X ray will not damage photographic film.

The image appears on the screen within a second after the system is activated, and lasts 10 to 15 minutes unless erased sooner. Time from erasure to installation of the next frame is less than one second.

Because the system has such low X-ray emission, costly and cumbersome shielding isn’t needed, and it can be adapted to a variety of installations.

Although the prototype is a baggage-screening deviceâ€”a most practical application, especially in conjunction with a conveyor systemâ€”Philips’ short-pulse X-ray detector could safely and effectively screen air passengers in a walk-through weapons-detection station.

For example, with metal detectors on all gates, those who triggered this first stage of the preboarding screening process could be diverted past a short-pulse X-ray unit for a quick, positive search. With this system, security officers would actually be able to see a concealed weapon or explosive device.

Research toward production of more effective deterrents continues on a wide scale, especially in the area of explosives detection. While no details have as yet been released, one of the more promising systems is said to be a neutron activator that is now under development by North American Rockwell.

“Bomb sniffers.” Also under consideration are chemosensing devices able to monitor for the presence of extremely small concentrations of vapor characteristic of certain materials. Some explosives continually emit such vapors.

A chemosensor device has been constructed that cyclically samples air for the vapor of ethylene glycol dinitrate ( EGDN) â€”which is characteristic of dynamite and technical nitroglycerineâ€”and register its presence. An experimental bomb sniffer of this type reportedly has already been tried out by El Al, Israel’s national airline.

Further research in chromatography and olfatronics may even provide a weapons detector capable of reacting to the characteristic vapors of gunpowder and its residues, bullet lubricant, gun oil, powder solvent, and similar substances present in a concealed firearm.

Perhaps the detective capabilities of the human nose should be considered, too. In Tashkent, the Russians employ a woman whose superb olfactory sense sniffs out passengers smuggling hashish. How about doing that with explosives?

Gunfights while airborne. Work on foiling skyjackers and bombers has focused on stopping the perpetrator on the ground. What about the even knottier and more controversial problem of defense while aloft?

Under review are such ideas as the secure (bulletproof and invasion-proof) cockpit and the use of armed guards and/or armed flight crews. (The United States is now stationing government agents aboard planes on some flights.) One misconception needs correcting: Although the hazards of a gun-fight aloft to passengers and crew are very real and serious, there is virtually no danger that a stray bullet might destroy the aircraft, should it penetrate the fuselage, by explosive decompression of the pressurized cabin at high altitude. According to Boeing engineers, one of their airliners can sustain a hole as large as a cabin window (10 by 14 inches in a 747) without exceeding the capacity of the pressurization system to compensate. Chances of a bullet severing a vital control linkage are remote, and, even if it did, all essential systems are well backstopped.

Obviously, the best place to stop the skyjacker is at the gate, not simply here, but everywhere. The hardware to do the job exists. Can any nation along the air lanes afford not to put it to use.