Popular Science
Issue: Mar, 1922
Posted in: Chemistry
No Comments on How Scientists Are Taking the Pinch Out of America’s Billion-Dollar Shoe Bill (Mar, 1922)

How Scientists Are Taking the Pinch Out of America’s Billion-Dollar Shoe Bill (Mar, 1922) 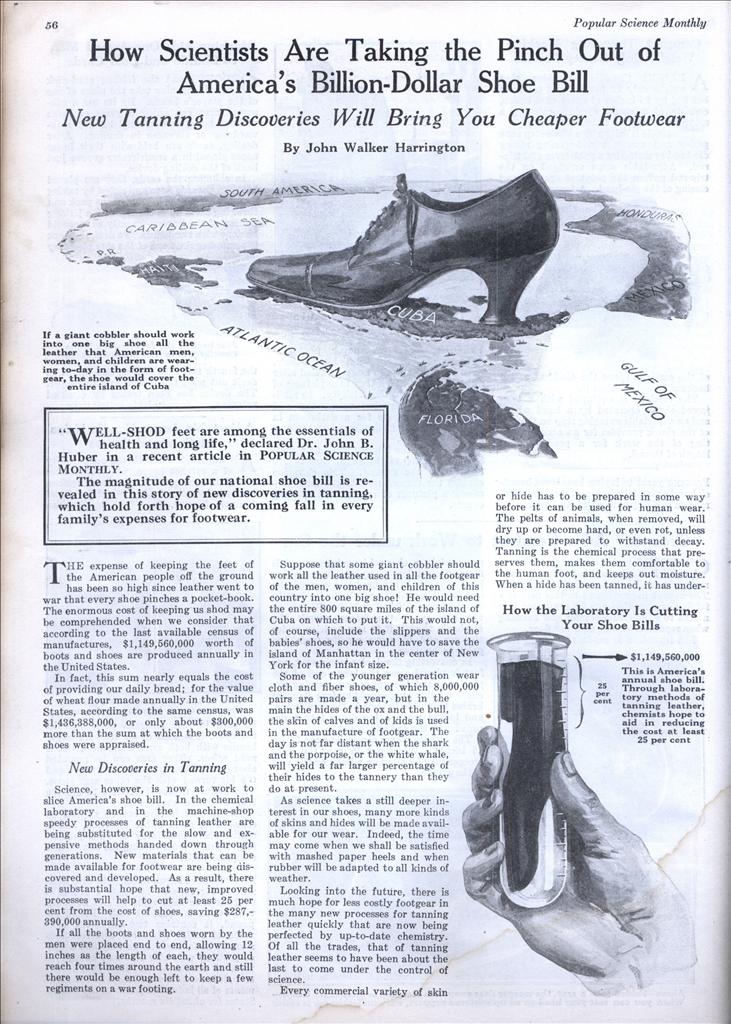 WELL-SHOD feet are among the essentials of health and long life,” declared Dr. John B. Huber in a recent article in POPULAR SCIENCE Monthly.

The magnitude of our national shoe bill is revealed in this story of new discoveries in tanning, which hold forth hope of a coming fall in every family’s expenses for footwear.

THE expense of keeping the feet of the American people off the ground has been so high since leather went to war that every shoe pinches a pocket-book. The enormous cost of keeping us shod may be comprehended when we consider that according to the last available census of manufactures, $1,149,560,000 worth of boots and shoes are produced annually in the United States.

In fact, this sum nearly equals the cost of providing our daily bread; for the value of wheat flour made annually in the United States, according to the same census, was $1,436,388,000, or only about $300,000 more than the sum at which the boots and shoes were appraised.

New Discoveries in Tanning Science, however, is now at work to slice America’s shoe bill. In the chemical laboratory and in the machine-shop speedy processes of tanning leather are being substituted for the slow and expensive methods handed down through generations. New materials that can be made available for footwear are being discovered and developed. As a result, there is substantial hope that new, improved processes will help to cut at least 25 per cent from the cost of shoes, saving $287,-390,000 annually.

If all the boots and shoes worn by the men were placed end to end, allowing 12 inches as the length of each, they would reach four times around the earth and still there would be enough left to keep a few regiments on a war footing.

Suppose that some giant cobbler should work all the leather used in all the footgear of the men, women, and children of this country into one big shoe! He would need the entire 800 square miles of the island of Cuba on which to put it. This would not, of course, include the slippers and the babies’ shoes, so he would have to save the island of Manhattan in the center of New York for the infant size.

Some of the younger generation wear cloth and fiber shoes, of which 8,000,000 pairs are made a year, but in the main the hides of the ox and the bull, the skin of calves and of kids is used in the manufacture of footgear. The day is not far distant when the shark and the porpoise, or the white whale, will yield a far larger percentage of their hides to the tannery than they do at present.

As science takes a still deeper interest in our shoes, many more kinds of skins and hides will be made available for our wear. Indeed, the time may come when we shall be satisfied with mashed paper heels and when rubber will be adapted to all kinds of weather.

Looking into the future, there is much hope for less costly footgear in the many new processes for tanning leather quickly that are now being perfected by up-to-date chemistry. Of all the trades, that of tanning leather seems to have been about the last to come under the control of science.

Every commercial variety of skin or hide has to be prepared in some way before it can be used for human wear. The pelts of animals, when removed, will dry up or become hard, or even rot, unless they are prepared to withstand decay. Tanning is the chemical process that preserves them, makes them comfortable to the human foot, and keeps out moisture. When a hide has been tanned, it has under- gone certain changes in its fibers that make it a new product. Chemistry has waved its magic wand over it, and has made it new.

Despite this fact, however, chemistry has had little to say about tanning until the past few years. In the past, the formulae for making the tanning liquors have been handed down from father to son. If hides have been spoiled, the moon has been to blame and the public has paid for the damage.

Old Methods Are Costly What a hard working citizen is the old time tanner, in his rubber boots and his stained apron! As stubborn as the blind mule that grinds the bark for the vats, he wades around in tons of wet bark and hauls away at the dripping hides for months before he is ready to say that he has made leather. Even in some of the most up to date tanneries, from three to six months is required to prepare a hide for the shoemaker. All this is tremendously expensive.

With the new methods, it is possible to tan some hides in 24 hours, and the quality of the goods is as high, and even higher, than it was before science lent a hand in leather manufacture. The college professor has been leading the leather industry into ways of economy by employing substances that will work the chemical changes of tanning quickly.

It took the college professors in the great leather school at the University of Leeds, England, to show the tanner how he could save time and money. Within the past few years, the American scientists have been coming to the fore, as was shown by the arrival of many delegates from England to attend recent meetings of the Section of Leather Chemistry of the American Chemical Society held at Columbia University, New York City.

Certain manufacturers have created a substantial fund for the investigation of the facts of chemistry that apply to tanning, and have placed the reports of those researches at the disposal of their competitors. Part of the fund is used at Columbia by Professor Arthur W. Thomas in running the smallest tannery on earth, which occupies only a square yard. Small bits of hide are in this tiny plant put through all the processes of the big establishment, and their structure is studied under the microscope. At Pratt Institute, in Brooklyn, is another center of the new tanning art, where up-to-the-minute tanners are pupils.

Exact Knowledge for the Tanner One of the new wrinkles in the tanning of skins is the gaging of tanning materials by the electrical discharges that come from them. This process gives to the tanner an exact knowledge of the work that his materials will accomplish. By studying the nature of the structure of the hides more closely in the light of the new knowledge of the colloids, that is of substances similar to gelatine, the tanner of the new school has his material tested in advance, so that he can tell just how it will act, instead of depending upon mere luck.

The modern tanner obtains extracts of his vegetable tanning ingredients, instead of making use of the substances themselves. He has learned, too, that the astringent action is due to tannin, its active principle, and that the making of the astringency is connected with the electrical charge of those tannin particles. The higher the charge, the greater the astringency. As a result of such discoveries, blind use of certain vegetable extracts is no longer necessary, since the properties peculiar to one kind can be obtained from an entirely different extract by simple treatment, according to the principles of colloid chemistry.” One of the most difficult problems in tanning is known as the regulation of bating. When hides are soaked in lime and water for the purpose of removing the hair, they swell, and must be reduced to normal, otherwise they will have a soft texture which will make them unfit for good leather. They are reduced by the bating process, which consists of soaking them in a “pickling” solution. Formerly this process was so uncontrolled, that many valuable hides were spoiled in the bating. By means of the microscope and the hydro- gen electrode, the nature of the action of the bating liquors has been established and a method devised for managing and directing the process that has changed it from the most mysterious to the most scientific process in the tannery.

Hides Tanned in Eight Hours The leather chemist of the present day advocates the chrome process of tanning, where speed is desired. This consists in submitting the structure of the hide to certain chemical changes, by adding bichromate or potash or such substances to the vat liquors. By this method, bides have tanned within eight hours. For many purposes, the chrome leathers are preferred. Certainly they are made in a manner that does not keep the money of the tanner tied up in his vats. In the opinion of the leather chemists, the whole art of tanning is likely to undergo still more radical changes in the next few years.

Through such described shortening of schedules, this revolutionary move will make its influence felt at the cobbler’s bench and in the retail store so that the American public may have better and at the same time cheaper shoes.