If you like this article, you should also check these out: 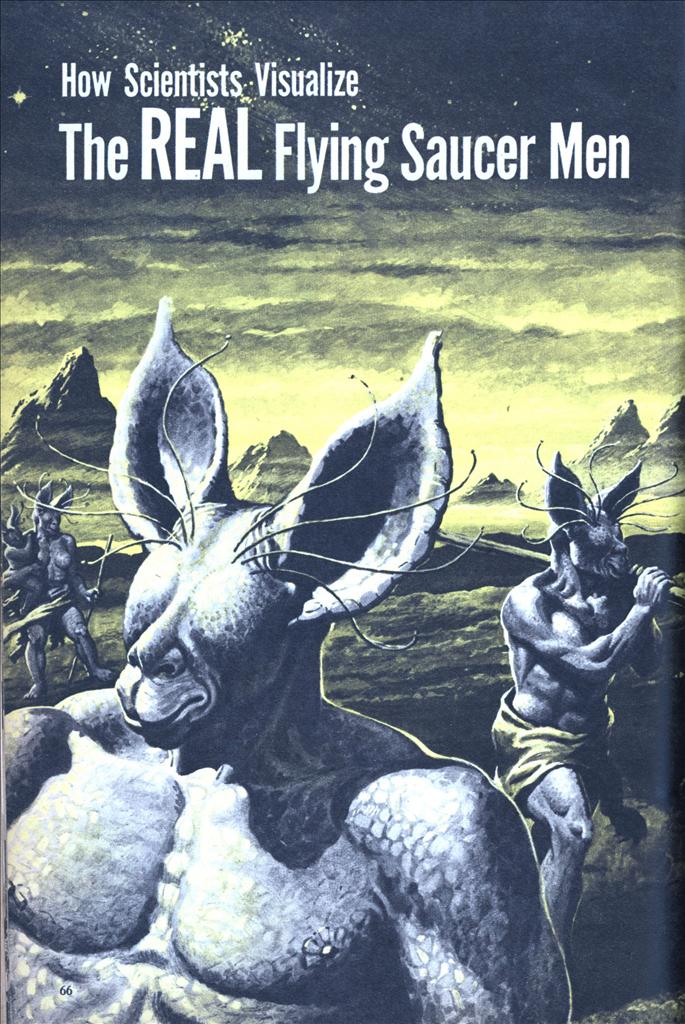 When scholars of the universe recreate spacemen along logical scientific lines, even those supposed weird little saucerites seem ordinary by comparison.

PRYING eyes of science are probing into space again in the hope of detecting life on other planets. Armed with new facts, previously accepted theories about what lies beyond the Earth are being discarded by scientists every day and the possibility grows more and more distinct that creatures, more fantastic than our most vivid imaginations could conjure up, may inhabit the planets around us. They make those startling stories of weird little men in flying saucers seem tame by comparison.

Dr. Henry Norris Russell of Princeton recently threw a bombshell into scientific circles when he said: “It appears now to be probable that the number of inhabited worlds within the galaxy is considerable. To think of thousands, or even more, now appears far more reasonable than to suppose that our planet alone is the abode of life and reason.”

And H. Spencer Jones, Britain’s Astronomer Royal and one of the world’s most noted inter-planetary authorities, declares: “It is reasonable to suppose that life on any other world will have developed along forms that are entirely different from any with which we are familiar and that are possibly beyond our conception.”

Just how would those inhabitants look? Could they be men, beasts, plants or a combination of all three? To get the answer, experts in the field were polled. This question was put to them: “Knowing what we do about conditions on other planetsâ€”differences in the constitution of the atmosphere, in the proportion of land and water, the temperatures and other phenomenaâ€”what kind of people could conceivably inhabit them?”

Some startling answers resulted. However, all the experts pointed out one vital fact: on most planets, life as we know it cannot exist. An earthman would die at once on Mercury, his organs ruptured by the boiling of his blood in the tremendous heat of the sunâ€”if he weren’t asphyxiated for lack of oxygen and dried up by lack of water. But the experts all agreed it is entirely possible that other planets may have developed their own life forms, entirely different from ours, suited to the very, very special conditions existing on their worlds!

Let’s go planet-hopping and take a look at a portrait gallery painted by the imaginations of inter-planetary experts.

First to Venus because it is most like the earth in weight and size and, except for the moon, comes closer to us than any other globe. Scientists are convinced that the planet Venus has an atmosphere, but it is composed almost entirely of carbon dioxide, with no detectable free oxygen. No evidence of water vapor has been observed, hence the surface of the planet must be largely desert, with no rivers, lakes or oceans.

What kind of people can live there? John W. Campbell, Jr., a profound student of extra-terrestial life who is editor of Astounding Science-Fiction, a magazine which has successfully prophesied many of the most astounding recent scientific discoveries, says: “Life can exist on Venus without oxygen. Here on earth we have micro-organisms which can stay alive in sulphuric acid and kerosene. Undoubtedly there are life forms which can take the oxygen from carbon dioxide, and why can’t these be creatures of flesh?”

Would a Venus man look vaguely like a human? “Why not?” counters Mr. Campbell. “After all, the human form on Earth represents two billion years of experimental engineering on the part of nature. It is the best possible form to do the things it has to. There is every reason to suppose that life on Venus, or on any other planet, if it has developed to a high level, has taken human form. But this form would have to conform to the specific conditions of the planet.”

Thus, Mr. Campbell points out, the lungs of a Venus inhabitant would have to be designed to perform a special function of extracting oxygen from carbon dioxide and his body cells would have a different chemical nature than ours. Now, since carbon dioxide is an extremely poor source of oxygen, a Venus man would have to breathe in considerable amounts to extract oxygen, hence his lungs would be developed to enormous size, giving him a tremendous barrel chest.

His food, Mr. Campbell says, would consist of fats and hydrocarbons. Trying to get life energy from these sources is like trying to burn gasoline under waterâ€”it can be done, but you need an awful lot of gas. Therefore, a Venus man would have a grossly protuberant belly and heavy, columnar legs to support his bulk. Because his energy source is poor, his movements would be lumbering and sluggish. And since he must eat such huge quantities, he would literally eat himself out of house and home, living a nomadic life, constantly on the prowl for food.

For this reason, Mr. Campbell thinks that the existence of a high culture on Venus is extremely doubtful since culture develops when people don’t have to spend all their time just keeping alive. The Venus man would have no time to think, hence the race would be virtually beastlike.

Now let’s leap to Mars and observe a Martian as described by Major James R. Randolph, engineer, mathematician and physicist, who taught at Pratt Institute in Brooklyn, N. Y., and Rhode Island State College and lectures extensively on interplanetary subjects. This is his conception of a Mars inhabitant: He has slender arms and legs, a large chest, wide, flaring nostrils and a broad mouth. His head would be about a quarter the size of his body; his eyes would be dark-adapted, with wide pupils. His size is problematicalâ€” Major Randolph’s guess is that he would be about four feet tall but he frankly admits there is no real basis for the assumption.

Now, why would a Martian look like this? Gravity on Mars is only 38 per cent of what it is on earth, hence everything would be easier to push, pull, pick up and carry. If everything weighs less, there would be less need for muscle, hence the reed-like limbs.

Why the large chest, the wide mouth and nostrils? There is considerable evidence that Mars has an atmosphere but it is extremely thin and the pressure is very low. Now, says Major Randolph, since air occupies more space if there is less pressure, a Martian would have to take much more air into his lungs than we do and oversize organs would result.

The mouth and nostrils would be wide for the same reasonâ€”larger air spaces would be required. The head, encompassing a normal brain, would be the size of an earthman’s thus disproportionate to the rest of his body.

Now come to Jupiter and prepare for a shock. Inhabitants who can conceivably live there are really something to see. The conditions on this planet are such that Jupiter man would have to be short, squat, with tremendous muscular developments and no eyes in his head! Yet despite this, he would be able to see in his own way.

Mr. Campbell explains: “The massive muscles would evolve because gravity on Jupiter is two and a half to three times that of earth, requiring the expenditure of considerable energy. The atmosphere is so dense and deep that it is perpetual, unrelieved night, making eyes useless, hence undeveloped.

“But why couldn’t a Jupiter man see by a built-in sonar system, much like bats?”

Next, we call on Saturn, Uranus and Neptuneâ€”the cold, remote wastes of the solar system. The atmospheres of these giant ‘ planets are known to contain hydrogen, marsh gas, helium, ammonia (on Saturn) and no oxygen at all. Such an atmosphere is poisonous to Earth men.

However, Fletcher Pratt, famous military and naval analyst and inter-planetary researchist, says: “Knowing what we know about these three giant planets, any life form there must be completely different from ours. It would have to use a nitrogen instead of an oxygen base, with lungs and other internal apparatus designed in such a way as to extract nitrogen from the atmospheric gases.”

Because of the known difficulty of extracting nitrogen from methane and ammonia, the creatures would have to possess enormous intake surfaces, and since gravity on the three planets is extremely high, they would possess heavy, squat forms. Light would be absent because of the distance of the planets from the sun, hence, like Jupiter men, the inhabitants would not have eyes but “some sort of organ to keep from running into things.”

Mercury, the fastest-moving planet in the solar system, has three landsâ€”one of eternal day, one of eternal night and the third (the so-called intermediate zone) a land of light and darkness. The land of night is intensely cold, the land of day burning hot. But the sun alternately rises and sets in the area in between, producing temperature variations.

Kenneth Heuer, lecturer at the Hayden Planetarium in New York City and author of the book Men of Other Planets, tells how a Mercurian might look.

He would follow the shifting sun every moment to stay in the most favorable zone, Mr. Heuer says. This means that he would be on the move practically every minute, would have no definite home, hence no culture could arise. A Mercurian would probably be four-footed, to make locomotion simpler. His food would consist of lower forms of vegetation, such as lichens on rocks. And again, because of the extremely tenuous atmosphere, the inhabitant would have a deep chest and large breathing orifices.

Now, between Mars and Jupiter are more than 50,000 tiny worldsâ€”minor planets called asteroids which have not been able to hold any atmosphere. They are airless, waterless, barren wastes. Hence, Mr. Heuer believes no life such as we are familiar with could possibly exist. No life, that is, except . . .

“Why couldn’t mineral life exist there?” he asks. Rock men?

“Exactly. Mineral life could best withstand the conditions which, as far as we know, are totally devoid of any animal life-sustaining factors.” How would they move or talk?

“They wouldn’t move. They would remain eternally where they are. And why couldn’t they communicate with one another by some form of telepathy?”

There you have themâ€”the creatures of other worlds as come to life in the scientific imaginations of the experts. Perhaps in centuries to come, man will span the vast reaches of the universe and at long last come face to face with his neighbors in space.

Until that time, however, we can only sit at our instruments, study the heavens and, based on what we see, let our imagination roam into other worlds. â€¢