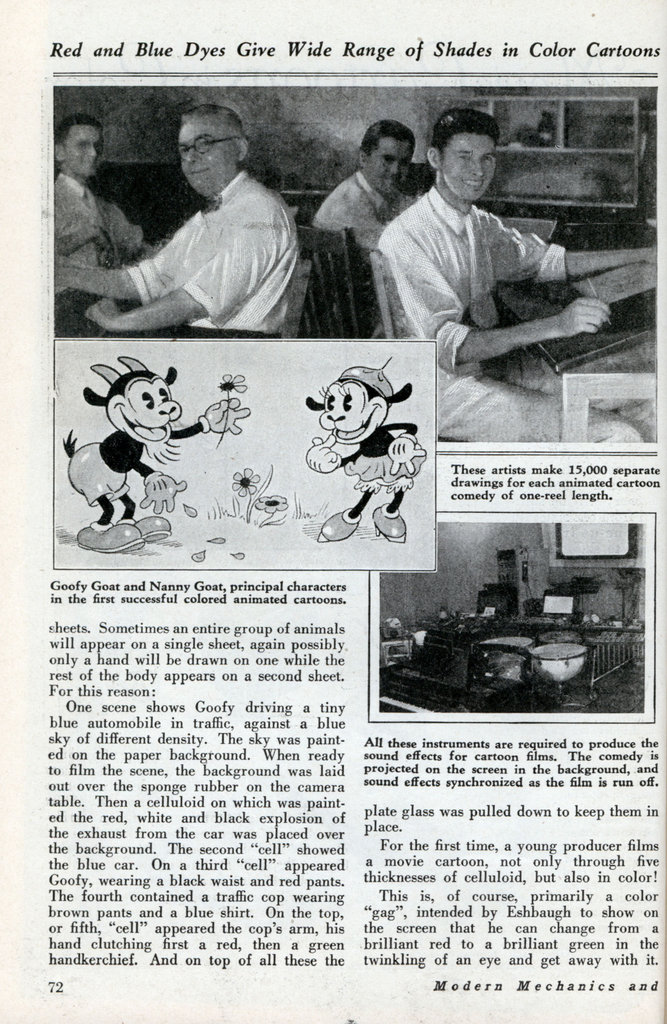 THE first of 13 one-reel animated cartoon comedies in color have just been completed in Hollywood, marking the beginning of a new era in this popular form of entertainment which has already made Mickey Mouse and his cohorts the highest paid actors in the movie world, although they draw no salaries. Ted Eshbaugh, a Boston artist, is the man who has at last succeeded in producing animateds in color. Making the colored comics duplicates the manufacture of black-white comics excepting the intricate application of color to the characters and transferring that color to the double negative that creeps through the recording camera a frame at a time. When you consider that 15,000 separate drawings on celluloid must be made by a staff of artists for a single reeler, composed of 16,000 frames, and that each figure or group of figures on each celluloid will display possibly six color combinations, you get some idea of the intricacy and tediousness of the process.

Let me give you some idea of the mechanical set-up before explaining the process. Eshbaugh mounts his camera lens-down on two beams above a table about the size of an ordinary office desk. An electric motor, connected by a rod to the camera’s driving mechanism, runs continuously. When the operator trips a key with his right hand, the rod engages the driving mechanism and turns the camera one frame, or one exposure.

But what is in the camera’s field of vision? First, a sheet of optical glass three-eighths of an inch thick and about 12 inches square, is set on a sheet of sponge rubber. The optical glass, which costs $30, is as nearly colorless as possible in order to give no reflections. The glass is held in two metal arms, which raise and lower by a foot pedal under the table. But we’re not ready to shoot yet. First, we must create the cartoons.

So we go back to the room where a dozen “animators” are engaged in drawing pencil sketches and others are coloring the celluloid sheets. The latter is the real background and secret of the whole process. Eshbaugh conducted hundreds of experiments to get the correct color combinations, colors which would not change by the time they appear on the screen. How he accomplished that is, of course, his secret; a secret for which producers would pay a huge sum.

To begin, suppose the action shows Goofy Goat and Nanny Goat, the names given the principal characters in this series, along a country road. A background of rural scenery is painted in colors on a paper strip possibly four feet long and a foot deep. Later, if Goofy and Nanny are to walk along the lane, for each frame the scenery will be shifted from one-sixteenth to one-quarter inch to show the action.

Next, the animals are drawn and colored on the celluloid sheets. Sometimes an entire group of animals will appear on a single sheet, again possibly only a hand will be drawn on one while the rest of the body appears on a second sheet. For this reason:

One scene shows Goofy driving a tiny blue automobile in traffic, against a blue sky of different density. The sky was painted on the paper background. When ready to film the scene, the background was laid out over the sponge rubber on the camera table. Then a celluloid on which was painted the red, white and black explosion of the exhaust from the car was placed over the background. The second “cell” showed the blue car. On a third “cell” appeared Goofy, wearing a black waist and red pants. The fourth contained a traffic cop wearing brown pants and a blue shirt. On the top, or fifth, “cell” appeared the cop’s arm, his hand clutching first a red, then a green handkerchief. And on top of all these the plate glass was pulled down to keep them in place.

For the first time, a young producer films a movie cartoon, not only through five thicknesses of celluloid, but also in color!

This is, of course, primarily a color “gag”, intended by Eshbaugh to show on the screen that he can change from a brilliant red to a brilliant green in the twinkling of an eye and get away with it.

While the traffic cop halted the car, he blew his nose first with the red hand-kerchief, then with the green. As he did so whistles blew, halting and starting the traffic. His arm was “animated,” and only that celluloid was changed during the brief episode. The sounds were synchronized after the picture was completed.

“In building colors,” Eshbaugh explained, “I start from the bottom and work to the top. I used red in the exhaust to carry through the four top celluloids. We use five celluloids for some scenes in each picture. Ordinarily, three will be used, but intricate action sometimes requires more. The change will not be apparent to an audience, however, because the more intense colors carry through.

“In order to keep uniform colors throughout a picture, on which we may be working several weeks, I mix my paints from imported pigment in one big batch. We also have a key color chart, from which we use principally red, blue, green, brown and gray. I found early that some standard colors would give an entirely different effect on the screen. Some go light, others dark. I now have a special color, which I have been unable to name, that produces a yellow; another gives a green, another a brown. These are produced through no formula, but from tedious experiment in recording and studying them.

“It is possible to record the colors through five thicknesses of celluloid because of a combination of lighting and color. You see, we paint the “cells” on both sides. The blacks and white appear on the top side, the other colors underneath. Possibly a dozen individual paintings will be necessary to show the extension of an accordion in the hands of an animal. And each must be complete, accurate and color-right.”

Although six colors may appear on a single drawing, fundamentally Eshbaugh starts with two colors, blue and red. “Every color,” he explained, “simple as it may look, requires painstaking study. There is some halation on the celluloids that destroys color values. I found it necessary to give them a flat, ‘fishy’ appearance and increase their density to overcome that trouble.”

In preparing for a picture, an animator draws each consecutive drawing on a board over an illuminated glass at the top of which are two steel registering pegs which fit through two holes in the paper or celluloid and hold the drawings in their proper place over the glass. This enables the animator to see the preceding drawing at the same time and to gauge the distance of the following drawings concerned in any action.

Each movement of a character must be formed by a separate drawing properly placed. For example, in order that Goofy may step from the right foot to the left, five drawings are made. Nine drawings will carry him along two steps. However, 50 drawings are required for him to walk across the screen. ‘ – â€¢

The drawings for a walk are spaced less than a quarter-inch apart. A run may be spaced about three-eighths inch apart and the results after photographing and projecting will show the proper speeds for a walk or a run. The original pencil drawings are drawn in pencil on paper by the animator, then handed to the tracers who trace the drawings in ink on the transparent sheets of celluloid. This task completed, they are transferred to the color room where artists fill in the outlined drawings with the desired colors on the reverse side of the sheets. Each scene has an appropriate painted background on paper.

Having inspected the finished work, Eshbaugh then takes the completed scene of animation in the form of possibly 15,000 celluloids to the camera room and stacks them on a table in the corner. There will be a few repeats. That explains why there are about 1,000 fewer “cells” than frames on the reel.

Eshbaugh takes his seat at the camera table, the tiny motor whirring overhead. He places the sponge rubber in the center of the table, switches on two banks of incandescent lights, fastens down the background, places on it three sheets of celluloid, trips the optical glass down in place and punches the key. The first of what in reality will be 32,000 pictures has been taken, for the camera photographs two pictures exactly alike at the same time on two separate negatives. Next Eshbaugh removes the top “cell”, puts another in place and shoots again, and so on for two weeks.

The camera is all ready for a “one picture one turn of the crank” movement, a process already described. On the table directly under the lens within proper focus distance of the field are fastened two registering pegs relative to the field as those on all the drawing boards in the studio. The background and celluloids are placed over these pegs.

As Eshbaugh changed “cells” rapidly and tripped the camera, he explained the “camera angle” on colored comics.

“We run two films through the camera simultaneously,” he said. “One film picks up the reds, the other gets the blues. In the past it would have been necessary to set up two cameras, making two negatives on separate machines. Naturally, it was difficult to get a perfect register, as the perforations on the side of the negative, having been cut either at different times or on different dies, did not always match. Now the film is made especially for color work and both are cut at the same time.

“The sound, which previously had been recorded on film, now is printed onto the single film which has received the two picture negatives. This new film is doubly coated to receive the two duplicate pictures on both sides. After printing, the film receives the color by means of dyes, either red and blue or red and green. The color is sprayed or floated on in long tanks, one color adhering to the one side of the film on the parts to correspond with the colors in the original drawing. This is done by the chemical reaction of the emulsion which is sensitive to the color used. The film is dried and the process is repeated in receiving the second color on the reverse side. Later the film is run through a preservative and is ready for projection.”

And there you have colored comics!