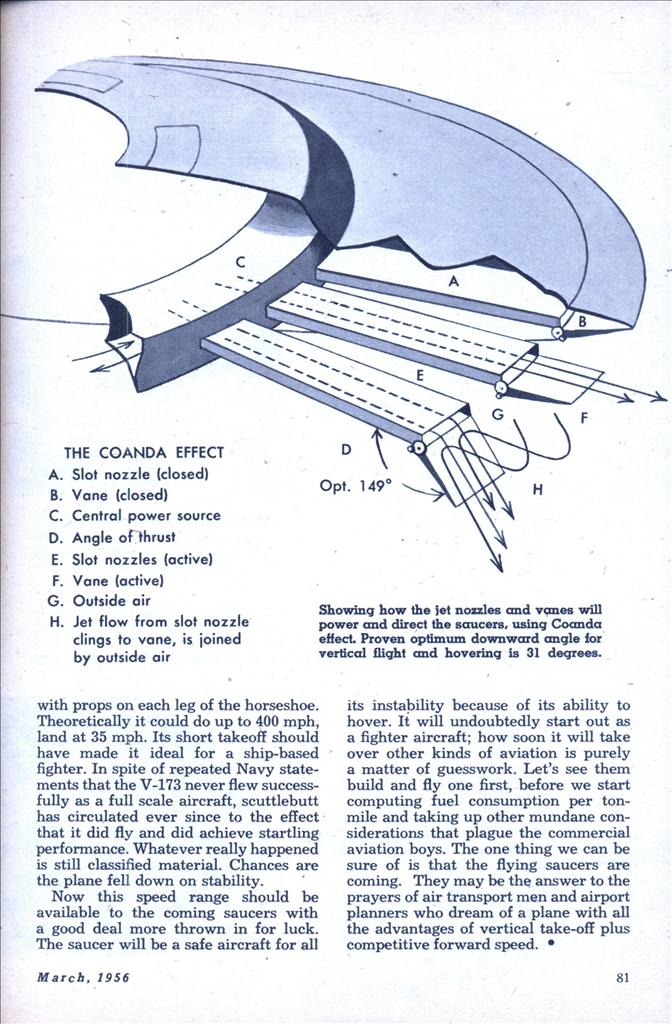 EVEN the most devoted science news and science fiction readers were surprised by a series of official releases that enlivened newspaper reading last summer and fall. First there was the White House release about artificial satellites, to become a reality no later than 1957. Then came the Department of Defense “flying saucer” release, dealing not with machines from outer space manned by small green men, but with a product of terrestrial slide rules and American factories, to be flown by American pilots.

In the Defense Department release Secretary of the Air Force Donald A. Quarles was quoted as saying that AVRO Ltd. of Canada had a USAF contract to build an aircraft similar to the â€¢ popular flying saucer concept. In subsequent news articles journalists observed sagely that something called the Coanda effect, a new principle in aerodynamics, had made the disc-like aircraft possible.

Henri Coanda is a Rumanian who has lived in Paris for several decades. He has the distinction of having designed, built and flown a pure jet airplane as early as 1910. His ideas came to the attention of a British-American Intelligence team back in ’45, when he was being questioned under somewhat embarrassing circumstances. The British member of the team, after hearing Coanda out, recommended to his government that it interfere in his behalf in case the French wanted to guillotine Coanda for collaboration with the Germans. Coanda’s head, he felt, was more useful to the West on Coanda than in a basket.

Fortunately Coanda is still alive; there was no evidence that the Germans ever used the Coanda effect in any of their aircraft. In all fairness to this talented man, he had never made a secret of the effect that is named after him. In fact, he had gone to some lengths to publicize it, presumably in his effort to find backers.

To visualize the Coanda effect, let us first imagine a rectangular nozzle from which a high speed jet stream emerges. A metal flap placed in the way of the jet will obviously deflect it. But it will not last long under that powerful battering. Coanda found that a flap below the nozzle will also deflect it; the jet might be said to “cling” to the flap. It also sucks down external air with it.

The angle between the flap and the direction of the jet flow must not be too large; at a right angle to the jet it will only act as a drag on the aircraft. Coanda found that his effect worked only at angles under 31 degrees. The size of the nozzle is important; the effect is hardly noticeable with nozzles of less than three inches in width or with nozzles of more than eight inches in diameter. Possibly later research has corrected this finding. If not, it would seem that a full-size flying disc would need many small nozzles and flaps to get up in the air and stay there.

These would be arranged around the rim of the saucer, probably in a way that would almost hide them from the spectator. At takeoff the Coanda flap at each nozzle would be extended and tilted down at a 31 degree angle; then the exhaust would be started. There would be a downward component in each exhaust, strengthened by the external air sucked down with it. The saucer would rise from the ground; by adjusting the total jet blast the pilot could then hover or rise higher.

The takeoff pad for the saucer need be only a little larger than the saucer itself. Of course it must be made of a substance that is impervious to the jet exhaust; that is the main engineering problem involved.

At a sufficient height the pilot would simultaneously withdraw all his flaps and cut off all but about one-sixth of his exhausts. These would then act as conventional propulsive jet plants and the saucer would thereafter fly as a plane, according to the same laws of aerodynamics as any other jet.

There will be no difference between wing area and fuselage in this craft, and the absence of tail surfaces will make for poor stability unless compensating devices are used. One compensating method that has long been considered for aircraft of this type is a careful distribution of weight inside. This is known to give a certain amount of stability, but will probably be used in conjunction with some more effective method such as having jet air intakes that also serve as wing slots. The use of wing slots as stabilizing devices is nothing new in aerodynamics; many conventional or “powered kite” aircraft have used them in the past. The placing of the intakes will be an important matter.

So far there seems to be no advantage to the saucer except vertical take-off, which is obtainable in aircraft that are inherently more stable. So why bother with the saucer concept at all? The answer is speedâ€”speed up to the sonic rate combined with slow, easy takeoffs and landings. During World War II, Chance-Vought built a plane called the V-173. The V-173 was horseshoe- shaped, with props on each leg of the horseshoe. Theoretically it could do up to 400 mph, land at 35 mph. Its short takeoff should have made it ideal for a ship-based ‘ fighter. In spite of repeated Navy statements that the V-173 never flew successfully as a full scale aircraft, scuttlebutt has circulated ever since to the effect that it did fly and did achieve startling performance. Whatever really happened is still classified material. Chances are the plane fell down on stability.

Now this speed range should be available to the coming saucers with a good deal more thrown in for luck. The saucer will be a safe aircraft for all its instability because of its ability to hover. It will undoubtedly start out as a fighter aircraft; how soon it will take over other kinds of aviation is purely a matter of guesswork. Let’s see them build and fly one first, before we start computing fuel consumption per ton-mile and taking up other mundane considerations that plague the commercial aviation boys. The one thing we can be sure of is that the flying saucers are coming. They may be the answer to the prayers of air transport men and airport planners who dream of a plane with all the advantages of vertical take-off plus competitive forward speed.