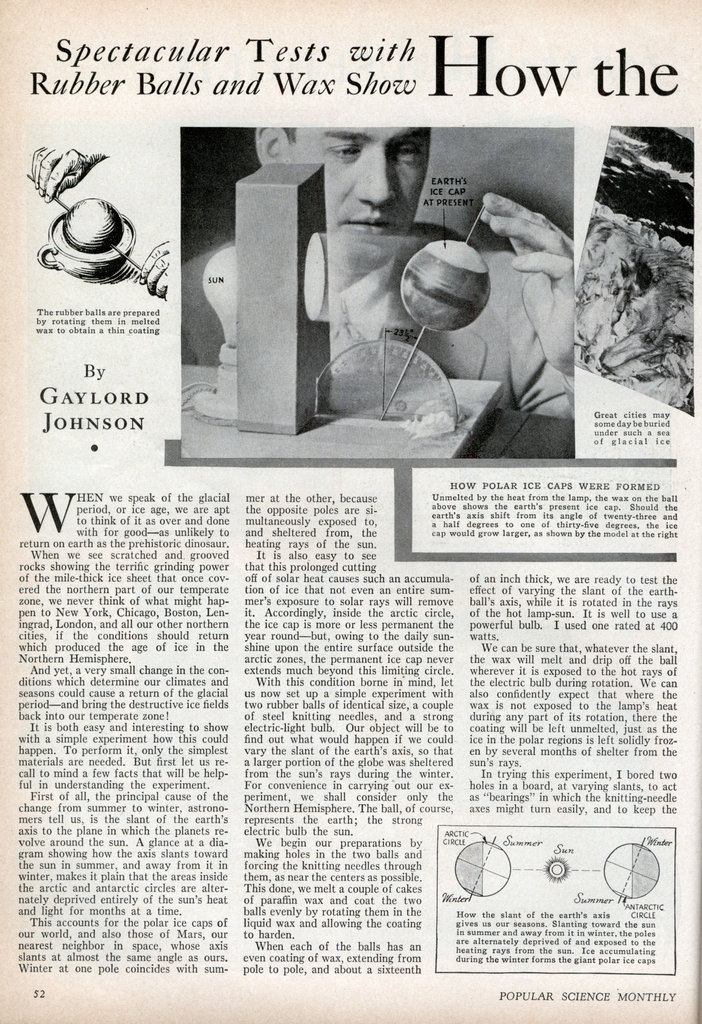 How the Ice Age May Return

WHEN we speak of the glacial period, or ice age, we are apt to think of it as over and done with for goodâ€”as unlikely to return on earth as the prehistoric dinosaur. When we see scratched and. grooved rocks showing the terrific grinding power of the mile-thick ice sheet that once covered the northern part of our temperate zone, we never think of what might happen to New York, Chicago, Boston, Leningrad, London, and all our other northern cities, if the conditions should return which produced the age of ice in the Northern Hemisphere.

And yet, a very small change in the conditions which determine our climates and seasons could cause a return of the glacial periodâ€”and bring the destructive ice fields back into our temperate zone!

It is both easy and interesting to show with a simple experiment how this could happen. To perform it, only the simplest materials are needed. But first let us recall to mind a few facts that will be helpful in understanding the experiment.

First of all, the principal cause of the change from summer to winter, astronomers tell us, is the slant of the earth’s axis to the plane in which the planets revolve around the sun. A glance at a diagram showing how the axis slants toward the sun in summer, and away from it in winter, makes it plain that the areas inside the arctic and antarctic circles are alternately deprived entirely of the sun’s heat and light for months at a time.

This accounts for the polar ice caps of our world, and also those of Mars, our nearest neighbor in space, whose axis slants at almost the same angle as ours. Winter at one pole coincides with summer at the other, because the opposite poles are simultaneously exposed to, and sheltered from, the heating rays of the sun.

It is also easy to see that this prolonged cutting off of solar heat causes such an accumulation of ice that not even an entire summer’s exposure to solar rays will remove it. Accordingly, inside the arctic circle, the ice cap is more or less permanent the year roundâ€”but, owing to the daily sunshine upon the entire surface outside the arctic zones, the permanent ice cap never extends much beyond this limiting circle.

With this condition borne in mind, let us now set up a simple experiment with two rubber balls of identical size, a couple of steel knitting needles, and a strong electric-light bulb. Our object will be to find out what would happen if we could vary the slant of the earth’s axis, so that a larger portion of the globe was sheltered from the sun’s rays during the winter. For convenience in carrying out our experiment, we shall consider only the Northern Hemisphere. The ball, of course, represents the earth; the strong electric bulb the sun.

We begin our preparations by making holes in the two balls and forcing the knitting needles through them, as near the centers as possible. This done, we melt a couple of cakes of paraffin wax and coat the two balls evenly by rotating them in the liquid wax and allowing the coating to harden.

When each of the balls has an even coating of wax, extending from pole to pole, and about a sixteenth of an inch thick, we are ready to test the effect of varying the slant of the earth-ball’s axis, while it is rotated in the rays of the hot lamp-sun. It is well to use a powerful bulb. I used one rated at 400 watts.

We can be sure that, whatever the slant, the wax will melt and drip off the ball wherever it is exposed to the hot rays of the electric bulb during rotation. We can also confidently expect that where the wax is not exposed to the lamp’s heat during any part of its rotation, there the coating will be left unmelted, just as the ice in the polar regions is left solidly frozen by several months of shelter from the sun’s rays.

In trying this experiment, I bored two holes in a board, at varying slants, to act as “bearings” in which the knitting-needle axes might turn easily, and to keep the wax-covered globes turning before the hot lamp at the same unvarying angles. One hole was bored into the surface of the board at an angle of twenty-three and a half degrees to the vertical; the other at an angle of thirty-five degrees to the vertical. The correct angles were obtained by using a protractor to guide the drill.

To prevent any scattering of the lamp’s rays, I also cut a round hole in a cardboard box, set up as shown. This allowed only a concentrated beam of light to reach the wax-covered ball.

With the apparatus complete as described, let us try the effect of rotating the ball in the hot rays of the lamp, with the knitting-needle axis turning in the hole which was drilled at an angle of twenty-three and one half degrees. This angle, you recall, is the same as that formed by the earth’s axis and the normal to the plane of its revolution around the sun.

As the wax-covered sphere turns slowly in the heat of the lamp, you will find the wax first softening, then melting, and finally dripping off upon the board below. Eventually, in a half-hour or so, depending upon the size and heat of the bulb used, all the wax, with the exception of the shallow cap within the “arctic circle,” which never enters the lamp’s melting light, will be removed.

When all but the “polar” wax has melted from one ball (rotated at the twenty-three and one half-degree angle,) let us take the other ball and rotate it before the lamp at a slant of thirty-five degrees. In a proportionate time, a slow rotation of the ball will melt off all the wax except that in the “polar” area, which is continuously sheltered from the lamp’s heat.

Compare this area of unmelted wax with the polar wax cap left on the ball which was turned at an angle of twenty-three and one-half degreesâ€”and what do you notice? A single glance shows that the wax area on the ball turned at the thirty-five-degree angle is much larger.

If we indicate on both spheres the outline of the American continents, it is apparent that if the earth’s axis actually did slant at an angle of thirty-five degrees, the polar ice might be expected to cover about half of the United States!

If you now glance at the illustration showing how far south the ice of the glacial period is known to have extended, it is very natural to ask whether the ice age may not indeed have been caused by a change in the slant of the earth’s axis.

This supposition is, in fact, the basis of one of the many theories which have been proposed to account for the glacial period. It is called “Drayson’s theory,” after Maj. Gen. A. W. Drayson, the English scientist who first suggested the idea.

Drayson’s theory advances some excellent mathematical reasons for believing that the slant of the earth’s axis is not kept at a constant slant of twenty-three and one-half degrees away from the normal to the plane of its orbit, but gradually increases its inclination until it reaches an angle of thirty-five degrees.

The-effect of this increased slant upon the earth’s climate would then be the same as the effect we produced upon our wax-covered ball by increasing its tilt away from the heat rays of the electric bulb. Just as the size of the polar cap of paraffin grew larger when the ball’s axis was inclined at thirty-five degrees, so the earth’s cap of ice would grow larger when its axis tipped to the same extent,â€”and the great glaciers would push farther and farther south- ward. The theory thus accounts for what actually occurredâ€”and for what may occur again.

Drayson estimated that the length of time required for this gradual sway of the earth’s axis to take place (from a minimum of twenty-three and one-half degrees to a maximum of thirty-five degrees) is about 15,878 years.

Since our globe’s axis is now nearly at its minimum slant, we can, according to Dray-son’s theory, determine the time of the last glacial period by figuring backward to the last period of maximum inclination.

We are now roughly at the year 2,000 A.D. â€”or at least we shall be in a single lifetime, a mere nothing in astronomical time intervals. Count backward 15,878 years and you arrive at 13,878 B.C. At this time, says Drayson, the glacial period was in full swing in the Northern Hemisphere, and in the Southern, too, of course.

IN THIS far-away epoch, over 2,000,000 square miles of Europe and 4,000,000 square miles of North America were covered with a great sheet of ice, which was in some places over a mile thick. In New England, the glacier came as far south as Cape Cod, which was actually formed from the rocks and soil pushed ahead of the ice wall. This is also true of the Dongan Hills, on Staten Island, New York City.

The southern edge of the ice extended westward along the border of New York State, across northern Ohio, and as far south as the present site of Indianapolis. In Europe, it covered the British Isles, and parts of Germany and Russia. If Drayson’s theory is correct, we may expect that many future cities of North America and Northern Europe will again be obliterated by the oncoming ice when the next glacial age reaches its peak at about the year. 18,000 A.D.