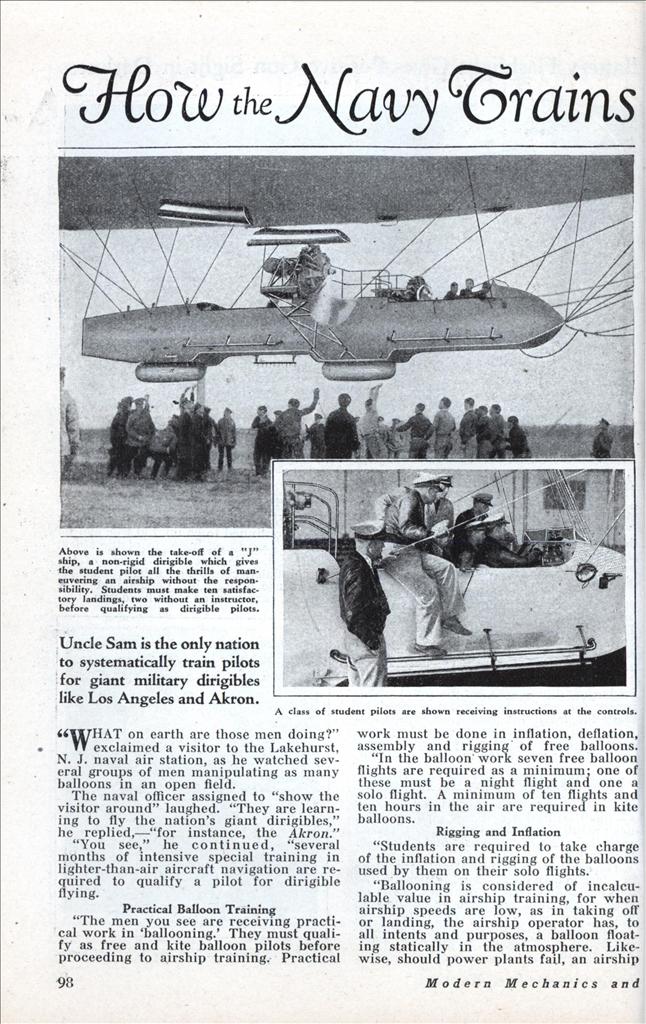 The naval officer assigned to “show the visitor around” laughed. “They are learning to fly the nation’s giant dirigibles,” he replied,—”for instance, the Akron.”

“You see,” he continued, “several months of intensive special training in lighter-than-air aircraft navigation are required to qualify a pilot for dirigible flying.

Practical Balloon Training “The men you see are receiving practical work in ‘ballooning.’ They must qualify as free and kite balloon pilots before proceeding to airship training. Practical work must be done in inflation, deflation, assembly and rigging of free balloons.

“In the balloon work seven free balloon flights are required as a minimum; one of these must be a night flight and one a solo flight. A minimum of ten flights and ten hours in the air are required in kite balloons.

Rigging and Inflation “Students are required to take charge of the inflation and rigging of the balloons used by them on their solo flights.

“Ballooning is considered of incalculable value in airship training, for when airship speeds are low, as in taking off or landing, the airship operator has, to all intents and purposes, a balloon floating statically in the atmosphere. Likewise, should power plants fail, an airship immediately becomes a balloon and must be maneuvered as such.

“The value of this free balloon training was brought home forcibly at the time of the Shenandoah disaster a few years ago. When the giant airship broke in two upon striking a line squall the main portion of the ship, in rear of the control car, floated away in the wind. Most of the survivors saved themselves by bringing this portion of the wreckage to earth as a free balloon.

“The training time required in non-rigid airships is twenty flights and twenty hours. During these flights the student must, for specified times, act as radio operator and as mechanician.

Must Fly at Constant Altitude “After ten hours’ instruction, the student is checked as to his ability to steer courses, keep constant pressure and fly at a constant altitude. He must make ten satisfactory landings under varying weather conditions. Before qualifying in non-rigid airships, he must make two flights without an instructor or qualified airship pilot on board.

“Before qualification as a pilot in rigid airships a student must have a minimum of fifteen flights and two hundred hours in the air in rigid airships. He must have performed certain prescribed duties satisfactorily; also, he must have had at least six months’ association with a rigid airship in active operating commission.

Rigid Examination Given “Upon appearing before the qualification board after completing the syllabus of training, a final examination, written and oral, is given.

“If the student has successfully fulfilled all the requirements, and has been recommended by the qualification board, he is designated a ‘naval aviator (airship)’ by the Bureau of Navigation.”

Instruction in these subjects is generally by the lecture method.