HOW TO BUILD A GEIGER-MUELLER URANIUM SURVEY METER (Feb, 1949) 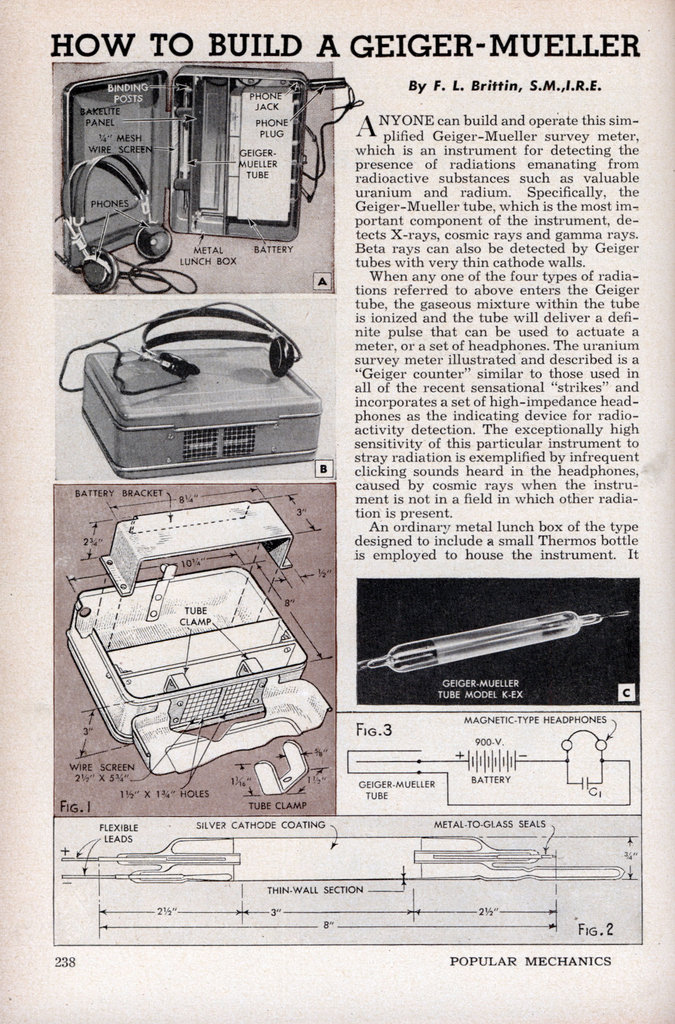 HOW TO BUILD A GEIGER-MUELLER URANIUM SURVEY METER

ANYONE can build and operate this simplified Geiger-Mueller survey meter, which is an instrument for detecting the presence of radiations emanating from radioactive substances such as valuable uranium and radium. Specifically, the Geiger-Mueller tube, which is the most important component of the instrument, detects X-rays, cosmic rays and gamma rays. Beta rays can also be detected by Geiger tubes with very thin cathode walls.

When any one of the four types of radiations referred to above enters the Geiger tube, the gaseous mixture within the tube is ionized and the tube will deliver a definite pulse that can be used to actuate a meter, or a set of headphones. The uranium survey meter illustrated and described is a “Geiger counter” similar to those used in all of the recent sensational “strikes” and incorporates a set of high-impedance headphones as the indicating device for radioactivity detection. The exceptionally high sensitivity of this particular instrument to stray radiation is exemplified by infrequent clicking sounds heard in the headphones, caused by cosmic rays when the instrument is not in a field in which other radiation is present.

An ordinary metal lunch box of the type designed to include a small Thermos bottle is employed to house the instrument. It provides a rugged case 10-1/4 in. long, 8 in. wide and 3 in. deep. This case is easily portable and only a few minor alterations are necessary, as will be noted in Fig. 1. The two openings, cut to provide screened windows, are backed with a strip of 1/4-in.-mesh wire screen, 2-1/2 in. wide and 5-3/4 in. long. This wire screen is held in position by four short 6-32 machine screws, washers and hex nuts. A 3/8-in. hole is drilled for mounting the open-circuit phone jack.

The Geiger-Mueller tube is mounted on a 1/8-in. Bakelite panel by means of two rubber-covered clamps. These clamps are made as detailed in Fig. 1, or, 3/4-in. fuse clips may be used. They are mounted 4-1/2 in. apart and 2-3/4 in. from each end, by means of short 6-32 machine screws and hex nuts. A 1-1/8-in. length of rubber tubing is slipped over the ends of each clamp where it contacts the Geiger-Mueller tube to hold it in position. This Bakelite panel is mounted in the case, 13/8 in. above the screened openings, by means of four 5/8 x 5/8-in. angle brackets. The battery clamp is made from 1/16-in. sheet metal and holds the three batteries in position.

Photos A, B, D and F show various views of the completed instrument. Fig. 2 is a sectional drawing of the highly efficient “Keleket” model K-EX Geiger-Mueller Gem tube used in this instrument; the actual tube is shown in photo C. It should always be handled by the ends; do not touch the fragile center. The schematic circuit diagram is given in Fig. 3, and the pictorial wiring and assembly diagram appears in Fig. 4. The underside view of the panel shows the method of mounting and connecting the tube. Note that the center positive and the outside negative leads are brought out to two binding posts mounted on the Bakelite panel; keep these flexible leads well separated. The center positive, or “hot,” lead goes directly to the positive 900-volt battery terminal and should never be touched when unit is “on;” always keep case dry. The open-circuit phone jack is in the negative battery lead. A .01-mfd. 600-volt fixed condenser is connected across the phone jack. Banana-type battery plugs with black for negative and red for positive, plastic insulated ends are used to connect the batteries in series. The phone plug is inserted only when the instrument is in use. There is practically no drain on the batteries; their life is estimated to be from six months to one year. These batteries list at $11.00 each; the model K-EX Geiger-Mueller tube costs $20.00 and it will give approximately 15,000 hours service in constant use. Before the survey meter is taken into the field for use, a quick test may be made to determine if it is functioning by merely holding it over the dial of a radium-illuminated watch as illustrated in photo E. If there is an increase in the number of “clicks,” it will indicate that the unit is working satisfactorily. Before making a survey, a background count should be noted in an area free from radioactivity. A pair of 4000-ohm phones should be plugged into the instrument and the number of clicks heard in the phones counted for a period of one minute. Ordinarily, the background count will vary between 10 and 50 per minute.

A topographic map of the area to be surveyed should be completed by the prospector before entering the field. Furthermore, familiarity with the various types of ores associated with uranium, thorium, radium and other radioactive material should be obtained. It should always be remembered that many precious metals such as vanadium, cobalt, nickel, gold, etc., are sometimes found in proximity to the radioactive ores, and subsequent analysis may indicate a lode of considerable value composed of nonradioactive metals. As successive counts are .recorded at different stations on the area being surveyed, differences in background count should be noted and plotted on the topographic sketch. The instrument will effectively direct a prospector to an area where the radioactive background is higher. When digging is started, samples of the ore or rock formation should be tested with the instrument to determine if the digging is proceeding in the right direction.