Popular Science
Issue: Apr, 1933
Posted in: DIY, Music
14 Comments on How to Build an Electric Organ FOR ABOUT FIVE DOLLARS (Apr, 1933)

How to Build an Electric Organ FOR ABOUT FIVE DOLLARS (Apr, 1933) 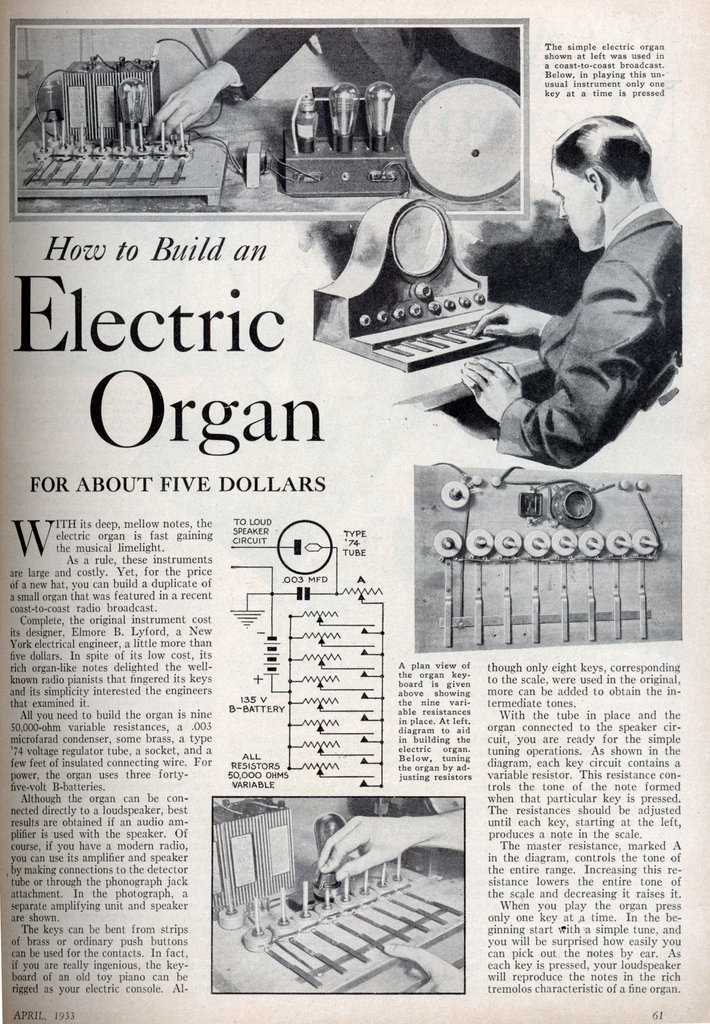 How to Build an Electric Organ FOR ABOUT FIVE DOLLARS

WITH its deep, mellow notes, the electric organ is fast gaining the musical limelight. As a rule, these instruments are large and costly. Yet, for the price of a new hat, you can build a duplicate of a small organ that was featured in a recent coast-to-coast radio broadcast.

Complete, the original instrument cost its designer, Elmore B. Lyford, a New York electrical engineer, a little more than five dollars. In spite of its low cost, its rich organ-like notes delighted the well-known radio pianists that fingered its keys and its simplicity interested the engineers that examined it. All you need to build the organ is nine 50,000-ohm variable resistances, a .003 microfarad condenser, some brass, a type ’74 voltage regulator tube, a socket, and a few feet of insulated connecting wire. For power, the organ uses three forty-five-volt B-batteries.

Although the organ can be connected directly to a loudspeaker, best results are obtained if an audio amplifier is used with the speaker. Of course, if you have a modern radio, you can use its amplifier and speaker by making connections to the detector tube or through the phonograph jack attachment. In the photograph, a separate amplifying unit and speaker are shown.

The keys can be bent from strips of brass or ordinary push buttons can be used for the contacts. In fact, if you are really ingenious, the key-hoard of an old toy piano can be rigged as your electric console. Although only eight keys, corresponding to the scale, were used in the original, more can be added to obtain the intermediate tones.

With the tube in place and the organ connected to the speaker circuit, you are ready for the simple tuning operations. As shown in the diagram, each key circuit contains a variable resistor. This resistance controls the tone of the note formed when that particular key is pressed. The resistances should be adjusted until each key, starting at the left, produces a note in the scale.

The master resistance, marked A in the diagram, controls the tone of the entire range. Increasing this resistance lowers the entire tone of the scale and decreasing it raises it. When you play the organ press only one key at a time. In the beginning start with a simple tune, and you will be surprised how easily you can pick out the notes by ear. As each key is pressed, your loudspeaker will reproduce the notes in the rich tremolos characteristic of a fine organ.