Mechanix Illustrated
Issue: May, 1956
Posted in: How to
Tags: clocks, collectors
No Comments on How To Collect Time (May, 1956) 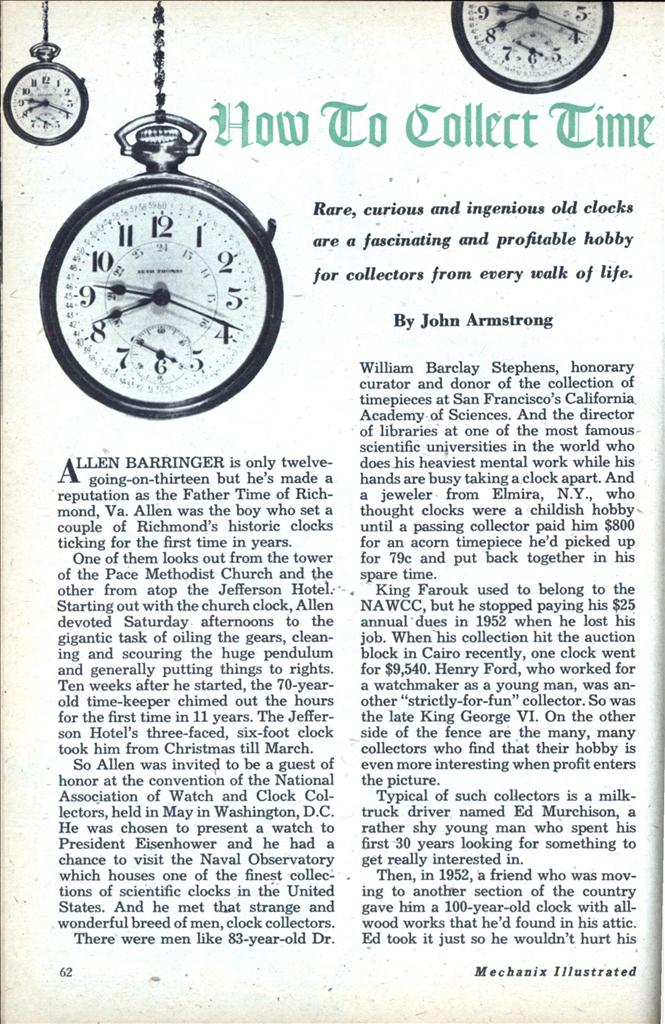 How To Collect Time

Rare, curious and ingenious old clocks are a fascinating and profitable hobby for collectors from every walk of life.

ALLEN BARRINGER is only twelve-going-on-thirteen but he’s made a reputation as the Father Time of Richmond, Va. Allen was the boy who set a couple of Richmond’s historic clocks ticking for the first time in years.

One of them looks out from the tower of the Pace Methodist Church and the other from atop the Jefferson Hotel. Starting out with the church clock, Allen devoted Saturday afternoons to the gigantic task of oiling the gears, cleaning and scouring the huge pendulum and generally putting things to rights. Ten weeks after he started, the 70-year-old time-keeper chimed out the hours for the first time in 11 years. The Jefferson Hotel’s three-faced, six-foot clock took him from Christmas till March.

So Allen was invited to be a guest of honor at the convention of the National Association of Watch and Clock Collectors, held in May in Washington, D.C. He was chosen to present a watch to President Eisenhower and he had a chance to visit the Naval Observatory which houses one of the finest collections of scientific clocks in the United States. And he met that strange and wonderful breed of men, clock collectors. There were men like 83-year-old Dr.

William Barclay Stephens, honorary curator and donor of the collection of timepieces at San Francisco’s California Academy of Sciences. And the director of libraries at one of the most famous-scientific universities in the world who does his heaviest mental work while his hands are busy taking a clock apart. And a jeweler from Elmira, N.Y., who thought clocks were a childish hobby until a passing collector paid him $800 for an acorn timepiece he’d picked up for 79c and put back together in his spare time.

King Farouk used to belong to the NAWCC, but he stopped paying his $25 annual dues in 1952 when he lost his job. When his collection hit the auction block in Cairo recently, one clock went for $9,540. Henry Ford, who worked for a watchmaker as a young man, was another “strictly-for-fun” collector. So was the late King George VI. On the other side of the fence are the many, many collectors who find that their hobby is even more interesting when profit enters the picture.

Typical of such collectors is a milk-truck driver named Ed Murchison, a rather shy young man who spent his first 30 years looking for something to get really interested in.

Then, in 1952, a friend who was moving to another section of the country gave him a 100-year-old clock with all-wood works that he’d found in his attic. Ed took it just so he wouldn’t hurt his friend’s feelings. After giving it a surface dusting he began to take it apart, and one thing led to another. A week later he was writing to the maker, in Walt-ham, Mass., to learn whether he had a rarity or not.

As it turned out, he didn’t—but he had made a find much more important. What he’d found was his curiosity. It led him to try to learn as much about clocks as he could. He read all the standard works: Old Clocks And Watches And Their Makers by F. J. Britten, American Clocks And Clock-makers by Carl W. Drepperd, The Old Clock Book by N. Hudson Moore, The Clock Book by Wallace Nutting and Time And Timekeepers by Willis I. Mil-ham. And he kept notes on everything he read. Within six months he felt well enough equipped to buy his first antique clock. That one clock—repaired—led to another, and pretty soon he was using his Arkansas milk route as a hunting ground for old clocks.

On one of these expeditions he saw an odd-looking clock hanging on the wall of a gas station. The proprietor had picked it up at auction for $5. Tentatively, Ed offered to-buy it for $9—the price he’d have to pay to replace the old clock with a new one from Sears. Two days later the sale was completed. Three months later, he sold it, partially re-Paired, for $280, and invested the profits in a couple of $40 grandmother clocks and a badly-broken grandfather clock for which he paid $200. Those clocks, too, yielded a profit. Today, some 2,247 clocks later, he has a permanent collection of some 45 choice pieces and a bank account a lot fatter than it was when he was concentrating on collecting milk cans.

Up-trading can be a good moneymaker, particularly if you bear in mind that while the demand for antique clocks is growing the supply of them is getting smaller. A clock that the maker once sold for $15 can bring as much as $1,000 from 1956 collectors—and possibly a lot more. Today there are several private collections valued at over $100,000. One is housed in a 14-room mansion, while its owner lives in a three-room apartment a few doors away.

The luckiest break in recent collecting history happened to a billposter from Camden, N.J. The prize piece in his collection is a mahogany and ebony-cased, carved-column, two-tier, eight-day, wooden movement clock with claw feet. The billposter bought it for $8 from an eccentric who has an attic full of clocks, watches, springs, and rusted parts. Today, the Camden man still can’t put a price on his $8 clock, but a wealthy collector recently offered over $3,000 for it. Sheer luck . . . except that the billposter knew his clocks.

The first rule in clock collecting is that a clock is no good if “the glass is broken,” or “the weights are missing,” or “Grandpa threw the works at Grandma.” Damaged clocks are interesting to some collectors, but to be worth its top price a clock should be original, bear the maker’s name on the dial and have all its parts plus a case in fair condition.

Collectors put clocks in five general categories: grandfathers, grandmothers, wall clocks, mantel clocks, and hangups. The grandfathers are of course those tall case timepieces that stand on the floor (and stop when the old man dies). They were made in America from the 1680’s to the 1840’s and today they fetch anything from $100 to $5,000.

Grandmothers are smaller versions of the same type and they’re in the same price range. Their period is roughly 1750-1850. A mark of authenticity in grandmothers is half number serial numbers like 57-1/2 or 101-1/2.

Wall clocks include the ever-popular banjo clocks, a $75-$1,000 category that has been heavily infiltrated by fakes; 25 per cent of the Simon Willard banjos on the market are frauds. People pay around $700 for them and go home happily stung until an antiquarian comes to tea and points out that the escapement wheels are not hand-notched and hand-filed, or that somebody has created a mongrel out of several old banjos, or that an unscrupulous maker of the Willard period forged the Willard signature. Other wall clocks are the lyre clock, the mirror clock, the mural clock. But the banjo is king in this class.

What the banjo is among wall clocks, the pillar and scroll case is among mantel clocks. The one-day wooden movement invented by Eli Terry is the prize to hunt for in this category.

Last major category is the hangup, a caseless grandfather that hangs on the wall with weights and pendulum exposed. They were made during the 17th, 18th and early 19th centuries.

Then there is the wild and woolly class of antique tickers called Unusual Clocks in which you find the clepsydras (water clocks), clepsammas (sandglasses) , lantern clocks, stovepipe clocks in which weights fall inside stovepipe pillars, revolving globe clocks, alarm clocks that set off gunpowder charges.

If you’re really serious about clocks you’d better join the National Association of Watch and Clock Collectors. It costs $6 to join and dues are $25 a year. Dr. Amos G. Avery, the Association’s president, will enroll you if you write to him at the NAWCC, Amherst, Mass.

Belonging to the NAWCC will also put you in touch with some very interesting people. As one member said recently, “All clock collectors are a little bit off their rockers, but they have so much fun it doesn’t really matter.” •