Popular Science
Issue: May, 1936
Posted in: DIY
Tags: smoking
2 Comments on HOW TO CONSTRUCT A FUN – PROVOKING Cigarette Dispenser (May, 1936)

HOW TO CONSTRUCT A FUN – PROVOKING Cigarette Dispenser (May, 1936) 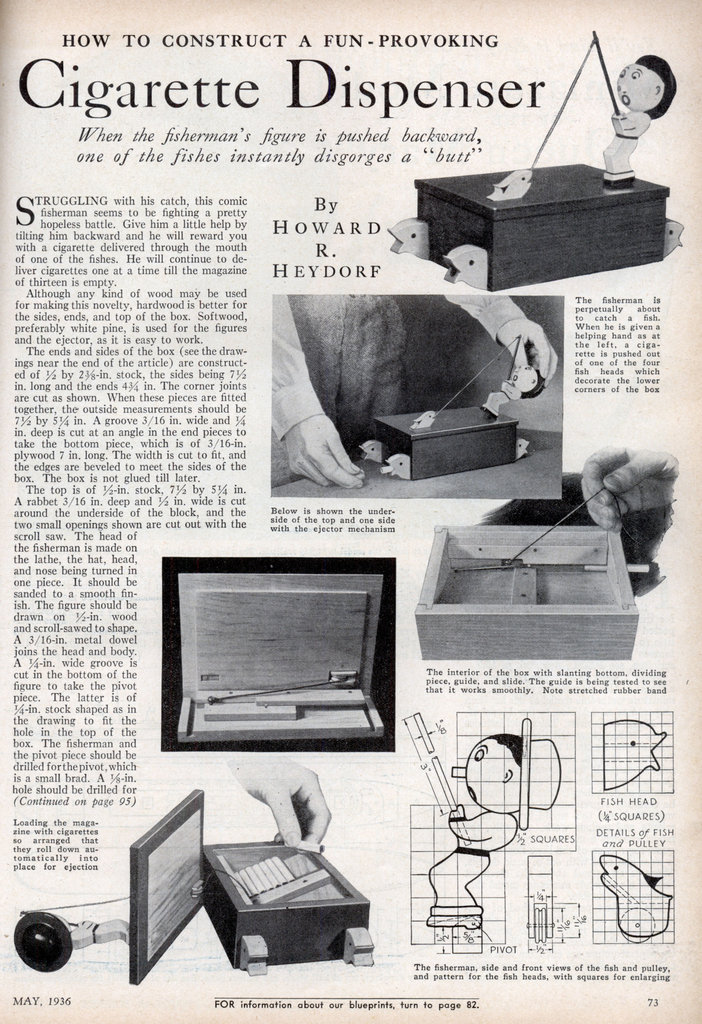 HOW TO CONSTRUCT A FUN – PROVOKING Cigarette Dispenser

When the fisherman’s figure is pushed backward, one of the fishes instantly disgorges a “butt”

STRUGGLING with his catch, this comic fisherman seems to be fighting a pretty hopeless battle. Give him a little help by tilting him backward and he will reward you with a cigarette delivered through the mouth of one of the fishes. He will continue to deliver cigarettes one at a time till the magazine of thirteen is empty.

Although any kind of wood may be used for making this novelty, hardwood is better for the sides, ends, and top of the box. Softwood, preferably white pine, is used for the figures and the ejector, as it is easy to work.

The top is of 1/2-in. stock, 7-1/2 by 5-1/4 in. A rabbet 3/16 in. deep and 1/2 in. wide is cut around the underside of the block, and the two small openings shown are cut out with the scroll saw. The head of the fisherman is made on the lathe, the hat, head, and nose being turned in one piece. It should be sanded to a smooth finish. The figure should be drawn on 1/2-in. wood and scroll-sawed to shape. A 3/16-in. metal dowel joins the head and body. A 1/4-in. wide groove is cut in the bottom of the figure to take the pivot piece. The latter is of 1/4-in. stock shaped as in the drawing to fit the hole in the top of the box. The fisherman and the pivot piece should be drilled for the pivot, which is a small brad. A 1/8-in. hole should be drilled for the 1/8-in. drill rod or wire that represents the fishing rod. This wire should be securely cemented in place.

The fish is scroll-sawed from 1/2-in. wood, a 1/4-in. groove is cut in the bottom, and a 1/8 in. hole is drilled for the fishline. The pulley is turned from hardwood and is pivoted with a brad in line with the 1/8-in. hole. The pivot piece for the fisherman and the fish can now be glued in place.

The slide and the guide are sawed to shape, and the guide is nailed or screwed to the side-piece of the box as shown. A small screw to which the line is attached is placed in the slide in the position indicated. A 5/16-in. hole through which the cigarette is to be ejected is now drilled. The box is then glued together. A small tack is driven into the slide and another into the bottom of the box, over which a small rubber band is slipped to return the slide after each stroke. The dividing piece must be cut to fit, and it may be necessary to cut a rabbet at the bottom to allow clearance for the tack in the slide.

A heavy piece of fishline is tied to the screw in the slide, passed around the pulley, carried up through the hole in the fish, and tied to the fishing pole. The magazine is filled with cigarettes and the ejector tested. It may be necessary to enlarge the ejector hole.

The fish heads are cut from 1-in. wood, and a 3/8-in. hole is drilled in the head that covers the ejector hole. These are glued in place.

A dark brown, varnished surface is best for the box. The fish are painted a light green with red mouths, black eyes, and black-trimmed fins. The fisherman’s suit is white, face pink, mouth red, and hair, hat, pole, suit trimmings, and the outline of his eyes and ears are black. The whites of his eyes are pure white.