HOW to EXPERIMENT With ROCKET SHIPS (Feb, 1930) 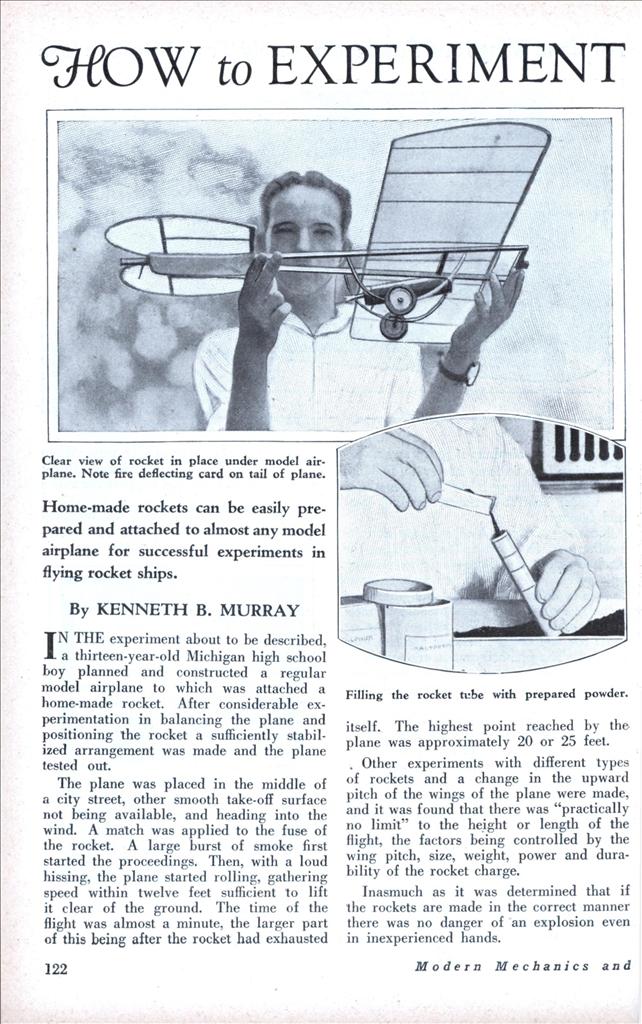 HOW to EXPERIMENT With ROCKET SHIPS

Home-made rockets can be easily prepared and attached to almost any model airplane for successful experiments in flying rocket ships.

By KENNETH B. MURRAY

IN THE experiment about to be described, a thirteen-year-old Michigan high school boy planned and constructed a regular model airplane to which was attached a home-made rocket. After considerable experimentation in balancing the plane and positioning the rocket a sufficiently stabilized arrangement was made and the plane tested out.

The plane was placed in the middle of a city street, other smooth take-off surface not being available, and heading into the wind. A match was applied to the fuse of the rocket. A large burst of smoke first started the proceedings. Then, with a loud hissing, the plane started rolling, gathering speed within twelve feet sufficient to lift it clear of the ground. The time of the flight was almost a minute, the larger part of this being after the rocket had exhausted itself. The highest point reached by the plane was approximately 20 or 25 feet.

. Other experiments with different types of rockets and a change in the upward pitch of the wings of the plane were made, and it was found that there was “practically no limit” to the height or length of the flight, the factors being controlled by the wing pitch, size, weight, power and durability of the rocket charge.

Inasmuch as it was determined that if the rockets are made in the correct manner there was no danger of an explosion even in inexperienced hands.

Although regularly manufactured rockets removed from a skyrocket stick and with the cone end removed assure one of success, the enjoyment of home manufacturing achievements put the home manufactured rocket plane in favor. Commercial rockets also present the difficulty of not being available in a sufficient number of different sizes and of different strengths. The home-made article can have incorporated in it the ideas of the builder and each can be made to suit the size and weight of the plane that it is to propel.

A light, tough cardboard should be secured and rolled into a tube of the desired length and diameter. The walls should be at least a quarter inch thick, and must be well pasted or glued. The powder is made of one part by volume, not by weight, of pulverized saltpeter, and one part charcoal. Each of these is non-explosive, but they must be pulverized separately. After pulverizing the materials, moisten the saltpeter, gradually adding water and mixing in a china bowl until it is a thick paste. The charcoal is then added a little at a time until all is well mixed in. To this is added about a tenth part of powdered sulphur. By the time that charcoal and sulphur have been added the compound will no longer be a paste but merely a moist compound. It should be spread out in a shallow pan and allowed to dry thoroughly, after which it is ready for use.

This powder is not explosive in the open air, merely burning slowly with much smoke. It must be confined to produce the power required to propel the plane.

Reverting to the rocket tubes, one end must be filled in with the exception of a small hole, half the size of a pencil. It was found that plaster of paris is suitable, as it can be poured into the end of the tube and allowed to set and dry well. A tightly wound roll of paper with a hole left in the center can also be glued tightly into the end of the tube.

The tube is next filled with powder. It must then be tightly stomped down until it is as compact as possible. Fill the tube to within an inch of the top with the packed powder and then stuff in some paper scraps moistened with glue until the end is entirely stopped up. The rocket fuse is made of a very small tube of paper, filled with powder and inserted in the opening in the rear, or propelling end of the rocket.

The illustrations show how the rocket is wired to the plane, care being used to find the center of balance. It must point downward slightly to avoid burning the tail of the plane in flight. A further precaution against the plane catching fire is to line the underside of the tail with a piece of cardboard, which will not burn through during the duration of each flight.

Place the plane on a level surface with the front facing into the wind. The igniting of the fuse is done from the rear.

There will be a burst of smoke and fire at first, and the rocket will quickly roar and hiss and propel the plane forward with amazing speed. It should leave the ground within a few feet if the balance is correct. The illustration shows the experimental plane just as it has left the ground.

No directions for the building of the plane are given as any flying airplane model, either a glider or rubber motored plane, should prove satisfactory.