Mechanix Illustrated
Issue: Jan, 1956
Posted in: How to
5 Comments on How to Invent and Sell Money-Making Premiums (Jan, 1956)

How to Invent and Sell Money-Making Premiums (Jan, 1956) 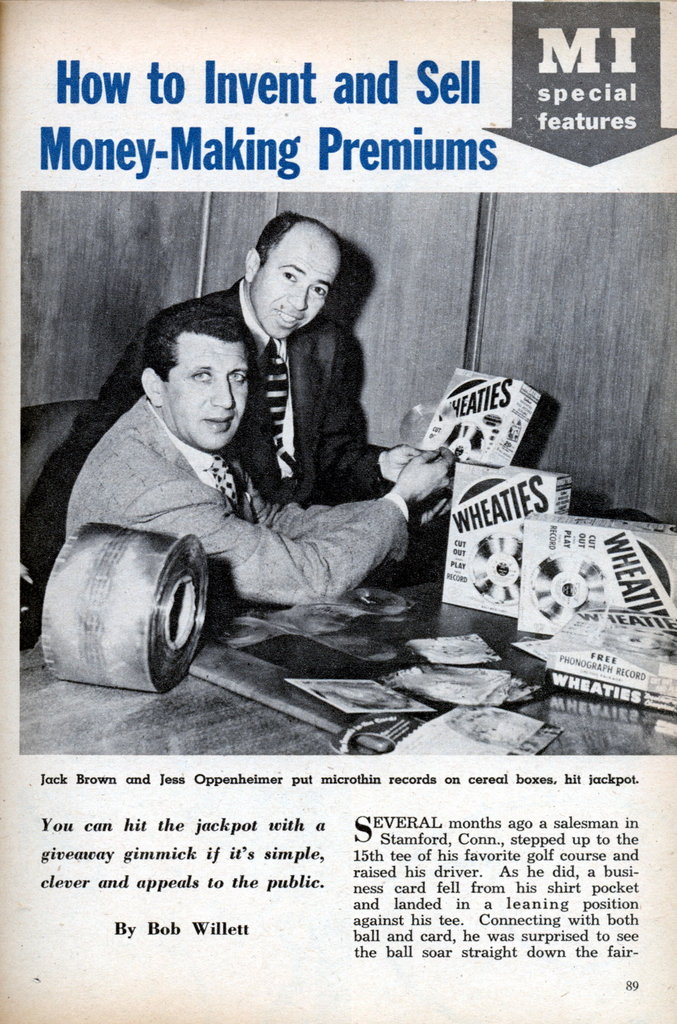 How to Invent and Sell Money-Making Premiums

You can hit the jackpot with a giveaway gimmick if it’s simple, clever and appeals to the public.

SEVERAL months ago a salesman in Stamford, Conn., stepped up to the 15th tee of his favorite golf course and raised his driver. As he did, a business card fell from his shirt pocket and landed in a leaning position against his tee. Connecting with both ball and card, he was surprised to see the ball soar straight down the fairwayâ€”his first decent drive that day.

Experimenting later, he theorized that the card absorbed enough misdirected force to prevent hooking or Â¦ slicing, then proved this conclusively with a flexible plastic tee of his own design. This answer to a divot-digger’s dream will soon be widely distributed as a giveaway gimmick and should prove to be one of the most popular products in the 104-year history of premium promotions.

Premiums are “something extra, given as an inducement to buy or as a reward for purchase.” One of the oldest of sales promotion devices, they first appeared in America in 1851 as simple gifts given by storekeepers to customers or their children in appreciation of patronage.

Today the premium field is more in need of new ideas than any other of comparable magnitude. Because of current buying resistance and value-consciousness on the part of the consumer, premiums are in for their biggest boom. Television has given them a big shot in the arm and there is a wide open market for good old American ingenuity, both amateur and professional, to help meet the demand for gadgets and gimmicks that make package prizes and boxtop boons a billion-dollar business.

Practically all consumer premiums are pointed at Mrs. Housewife or her offspring and such merchandise may be packed inside a package, banded on the outside of it or available over the counter from the dealer. Proof of purchase may also be received in the form of a coupon, label, band or boxtop, to be sent with a coin for premium redemption by mail. Package inserts are limited as to size and weight and package-banded premiums must be durable enough to stand rough handling and lend themselves to stacking and display. The cards, badges and small toys enclosed with breakfast food are an example of common inserts and a teaspoon tied to two packages of tea is frequently a banded-premium offer.

Cutouts that are part of the package itself have always been popular but Jack Brown of Lawndale, Calif., hit one of the biggest jackpots in premium history last year by giving this idea a new gimmick. He perfected a method of putting 7-inch microthin phonograph records on the sides of General Mills cereal boxes and orders for 50 million of these boosted his Rainbo Record Company into the big-time.

Mail-in premiums have always been popular with both consumers and manufacturers. Their basic appeal is that they are obviously bargains which are available only as premiums or which are available at much less cost than similar items on sale in stores. Because they are self-liquidating, increasing sales without increasing expenses, they are used by big and little firms alike.

The major cereal companies have been among the top users of consumer premiums for more than a quarter of a century, with soap manufacturers running them a close second. The latter aren’t as likely a field for the amateur inventor as the former, since they ordinarily stick to non-gimmick-type premiums with proven consumer acceptance, such as bath brushes, knife sets, nylons and other normal household merchandise.

“For youngsters, a premium should be either something to wear or something with action,” advises Ralston Purina’s premium expert, “Our cardboard Totem Head proved to be a good new idea last year but the Cosmic Smoke Gun was also a big hit. And it had been used in various forms, all propelling harmless substances, ever since our early Tom Mix radio program promotions.”

One of the most popular recent premiums is the “space flashlight” replica of Captain Video’s gun, used in a darkened room to write “in letters of fire” on a phosphorescent card. For daylight operations, there’s the pocket Distance Finder which works on the same principle as an Army range-finder. It bids fair to rival the previous popularity of the Sun Dial watch, patterned after an ancient bracelet in the Smithsonian Institute, with “no hands, no spring, no glass and waterproof!”

From the boxtop and coupon point of view, the timing and radio-TV plugging mean’ as much to premium success as the basic idea. Last year’s baking powder-powered model of the USS

Nautilus was a natural because the new Nautilus itself was in the news and Disney made a movie about the original one. Frogmen, utilizing the same submerging principle, were a perfect sequel for this season.

Related items for a series of promotions have invariably been successful, as witness the miniature U. S. license plate premiums that were followed by a foreign set and then by a collection of car emblems. Although designed primarily for children, these premiums proved appealing to adult collectors as well and new sales records were set by the products with which they were distributed.

Because it’s difficult to pick a winner or loser in the premium field, there’s no long list of don’ts. However, it’s generally agreed that anything strictly educational should be avoided. One of the biggest premium flops was a condensed version of an etiquette book. The original retailed for $4 and the pocketbook premium was offered for a mere 25 cents. It looked like such a bargain that it would break all premium response records, yet requests for copies didn’t even cover the cost of preparing the condensation for publication.

Another important type of premium is the “door-opener” sales incentive idea, given by salesmen as a reward to housewives or businessmen for allowing them to put more than a foot in the door. These are frequently in the gadget-gimmick category and can be almost anything that would be used in home or office.

Premium ideas are usually rejected because they’re too expensive to manufacture, they can’t be adapted to the manufacturer’s advertising campaign or they are too complicated for the average person to appreciate. Simplicity is the key to success when it comes to inventing premiums.

In attempting to sell a premium idea, the amateur inventor should first familiarize himself with the field. Information and assistance are available from the Premium Advertising Association of America, 608 Fifth Ave., New York 20, N. Y. Contact with inventors’ clinics and hobby shows can be helpful, since many of them maintain pipelines to premium users. Trade magazines contain not only many examples of new premiums but also details of current market requirements. Among the leading premium publications are Premium Buyers’ Guide, 34 North Crystal Street, East Stroudsburg, Pa., and Premium Practice, 386 Fourth Ave., New York 16, N. Y.

There’s money in gimmicks and an analysis of case histories indicates that the inventor of a premium meeting with average success can count on profits running from $5,000 to $10,000 annually, for one to five years. Most important thing to bear in mind is that 95 per cent of the ideas submitted to manufacturers each year aren’t really new. Scissors, bottle openers and nutcrackers aren’t exactly novel but one of today’s prize premiums was acceptable because it combines all three and also has magnetized tips for picking up pins.

You may invent a toy geiger counter that fits on the finger, reacts to a fairly common soil substance by moving, clicking or changing color, can be used to draw a map of the “ore” location in invisible ink and also for sending secret signals to the pint-sized prospector’s partner. If you do, you’ll hit a premium jackpot.