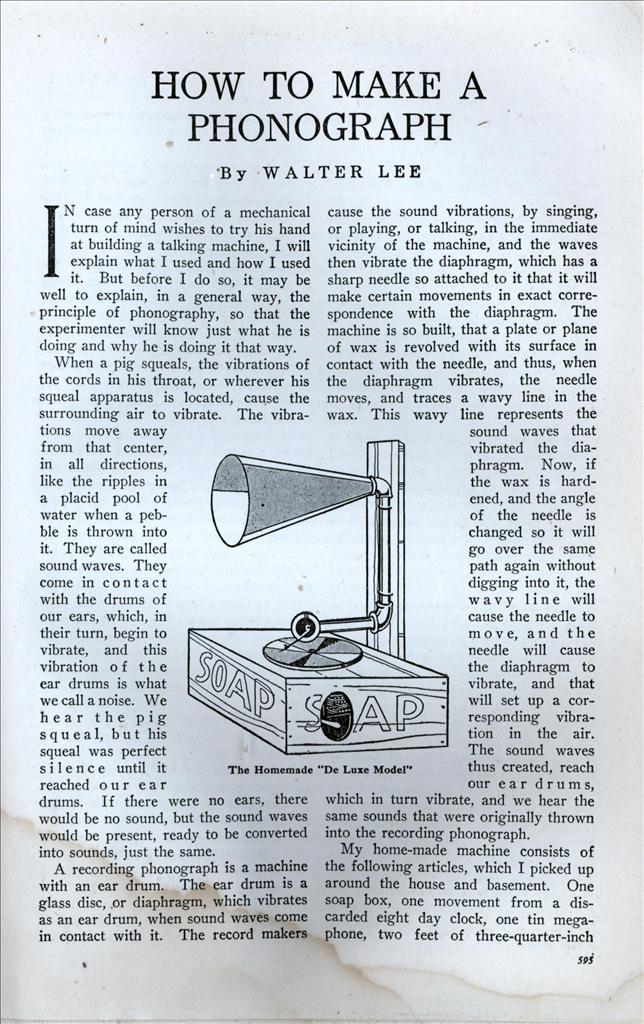 HOW TO MAKE A PHONOGRAPH

IN case any person of a mechanical turn of mind wishes to try his hand at building a talking machine, I will explain what I used and how I used it. But before I do so, it may be well to explain, in a general way, the principle of phonography, so that the experimenter will know just what he is doing and why he is doing it that way.

When a pig squeals, the vibrations of the cords in his throat, or wherever his squeal apparatus is located, cause the surrounding air to vibrate. The vibrations move away from that center, in all directions, like the ripples in a placid pool of water when a pebble is thrown into it. They are called sound waves. They come in contact with the drums of our ears, which, in their turn, begin to vibrate, and this vibration of the ear drums is what we call a noise. We hear the pig squeal, but his squeal was perfect silence until it reached our ear drums. If there were no ears, there would be no sound, but the sound waves would be present, ready to be converted into sounds, just the same.

A recording phonograph is a machine with an ear drum. The ear drum is a glass disc, .or diaphragm, which vibrates as an ear drum, when sound waves come in contact with it. The record makers cause the sound vibrations, by singing, or playing, or talking, in the immediate vicinity of the machine, and the waves then vibrate the diaphragm, which has a sharp needle so attached to it that it will make certain movements in exact correspondence with the diaphragm. The machine is so built, that a plate or plane of wax is revolved with its surface in contact with the needle, and thus, when the diaphragm vibrates, the needle moves, and traces a wavy line in the wax. This wavy line represents the sound waves that vibrated the diaphragm. Now, if the wax is hardened, and the angle of the needle is changed so it will go over the same path again without digging into it, the wavy line will cause the needle to move, and the needle will cause the diaphragm to vibrate, and that will set up a corresponding vibration in the air. The sound waves thus created, reach our ear drums, which in turn vibrate, and we hear the same sounds that were originally thrown into the recording phonograph.

My home-made machine consists of the following articles, which I picked up around the house and basement. One soap box, one movement from a discarded eight day clock, one tin megaphone, two feet of three-quarter-inch gas pipe and three elbows, a piece of a worn out inner tube, a diaphragm of hard rubber from a telephone receiver, an old scarf pin, various pieces of wood, nails, bolts and one pie tin. There were also two iron washers. The tools I used, were a pair of pliers, a pocket knife and a hammer.

The clock movement I removed from its case, then took from it, the dial and hands, its hour and minute wheels. Then I removed its escapement, which is the mechanism which controls its speed. In some clocks, this is simply the pendulum and verge, but in this clock it was the balance wheel and hair spring, pallet fork, and escape wheel. You can tell what these are by going over the wheel train. The first wheel or pinion, is the one on which the mainspring is wound, the second is the center wheel or pinion, on which the minute hand is mounted and from which the hour wheel is geared. The third is an idler. The fourth is the one on which the second hand is mounted, but it is always present, whether there is a second hand on it or not. The fifth is the escape wheel, the sixth is the pallet pinion, and the seventh is the balance wheel, which has a very fine spring on it, and which turns in opposite directions alternately. The balance wheel, the pallet and the escape wheel form the escapement.

The rest of the wheel train could now turn at high speed, from the power of the mainspring. Using two of the wheels I had removed, and two pieces of the hairspring, I made a speed governor and set it so that the train would turn the center pinion at eighty-five revolutions per minute. I attached the governor to the fourth pinion, or the one which was now last in the train.

I now whittled a little block of wood into the shape of a spindle and fastened it rigidly to the center pinion, in the place where the minute hand had been. It should be tight enough so that it will not wobble, and it must run true. In the bottom of a pie tin, to one side of which I had glued a disc of cloth, taken out of an old overcoat, I now punched a hole in the exact center, and fastened it to the spindle with a screw and another piece of wood to act as a continuation of the spindle.

My tin pan now would revolve by the power of the clock spring. I made a friction brake with a lever and a piece of wood, to act against the fourth wheel. Then I mounted the whole in a soap box, so that the spindle with the tin pan on it was on top and on the outside. By means of a hole in the side of the box, I could reach in with my hand and wind the spring, or control the brake.

The next step was to make the reproducer and its conducting line to the horn. Two large iron washers, about two inches in outside diameter, I fastened together, first sandwiching between them two rubber washers of the same size, with the telephone diaphragm between them. The washers were held together with three small bolts and six nuts, not through them, but against the outer edge, like clamps. A long, strong scarf pin with its head and point cut off, I now fastened to the center of the diaphragm with wax, and at the point where the pin passed the edge of the iron washers, I doubled it around on itself, to form a loop. Through the loop I ran a small piece of wire and fastened both ends of it between the washers to act as a support for the pin. On the end of the pin I impaled a small block of wood, which had a small hole in the other end, about the size of a regular phonograph needle. With a very small wood screw, I fastened the needles in the hole.

I then took the shell of an electric light socket, the small end of which was fortunately a good tight fit to the inside of the washer behind the diaphragm, and the other end was an equally tight fit over the outside edge of an elbow for three-quarter-inch pipe. The elbow, L screwed to a ten-inch length of three-quarter-inch pipe, with another elbow at the other end, and a second length of pipe with a third elbow was then put on!

To the third elbow I fastened the tin megaphone.

Then I attached this rig to an upright which I nailed to the soap box, in such a way that it would be free to swing, and balanced a little to the left, so its tendency would be to swing that way. The adjustment of this somewhat delicate balance was the hardest part of the entire job. .

My phonograph was now complete and I set a record on it. To my surprise, it really played! Not exquisitely, perhaps—let us rather say with surprising ability and persistence.

Had I been obliged to purchase the material out of which this home-made and homely machine is made, it would have cost me from one dollar to two dollars, the greatest expense being for the clock works. I have an idea, however, that the resources of nearly any attic or basement storeroom contain all the requisite materials.