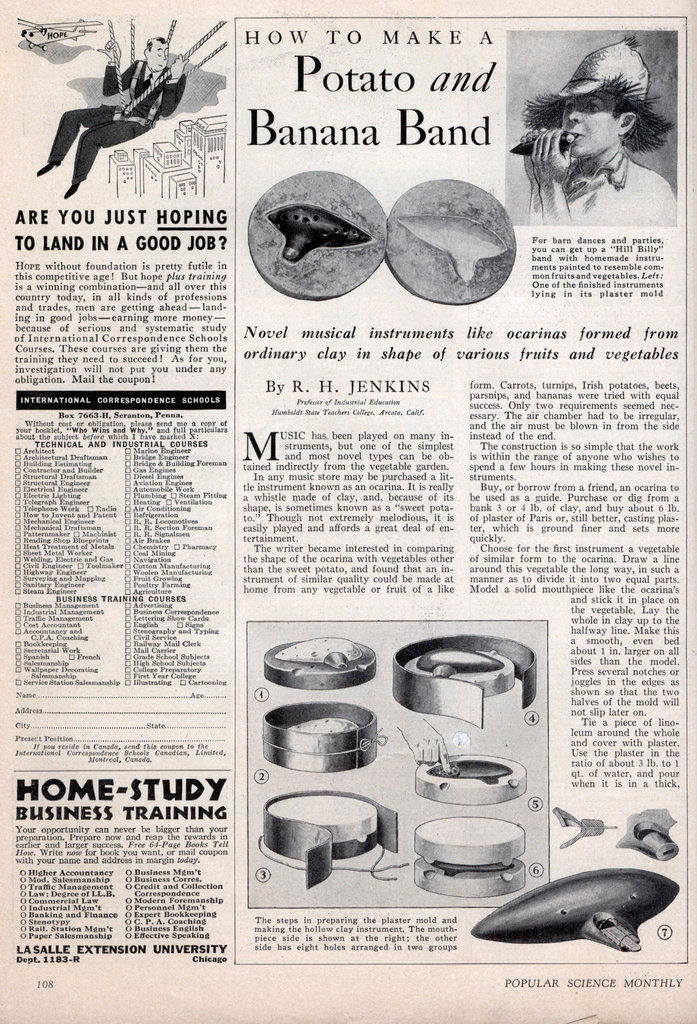 HOW TO MAKE A Potato and Banana Band

MUSIC has been played on many instruments, but one of the simplest and most novel types can be obtained indirectly from the vegetable garden.

In any music store may be purchased a little instrument known as an ocarina. It is really a whistle made of clay, and, because of its shape, is sometimes known as a “sweet potato.” Though not extremely melodious, it is easily played and affords a great deal of entertainment.

The writer became interested in comparing the shape of the ocarina with vegetables other than the sweet potato, and found that an instrument of similar quality could be made at home from any vegetable or fruit of a like form. Carrots, turnips, Irish potatoes, beets, parsnips, and bananas were tried with equal success. Only two requirements seemed necessary. The air chamber had to be irregular, and the air must be blown in from the side instead of the end.

The construction is so simple that the work is within the range of anyone who wishes to spend a few hours in making these novel instruments.

Buy, or borrow from a friend, an ocarina to be used as a guide. Purchase or dig from a bank 3 or 4 lb. of clay, and buy about 6 lb. of plaster of Paris or, still better, casting plaster, which is ground finer and sets more quickly.

Choose for the first instrument a vegetable of similar form to the ocarina. Draw a line around this vegetable the long way, in such a manner as to divide it into two equal parts. Model a solid mouthpiece like the ocarina’s and stick it in place on the vegetable. Lay the whole in clay up to the halfway line. Make this a smooth, even bed about 1 in. larger on all sides than the model. Press several notches or joggles in the edges as shown so that the two halves of the mold will not slip later on.

Tie a piece of linoleum around the whole and cover with plaster. Use the plaster in the ratio of about 3 lb. to 1 qt. of water, and pour when it is in a thick, creamy state. As soon as the plaster is hard, remove the linoleum wall, tear away the clay, and coat the face of the fresh plaster with vaseline to keep the two halves from sticking. Tie the linoleum around once more and, with the vegetable still in place, pour in fresh plaster to form the second half of the mold.

With a case knife pry the two halves apart and take out the model. Rub into each half of the mold a thin, even layer of clay, except at the mouthpiece, which should be modeled solid. Dampen the edges of the clay and press the two halves together. Whittle a thin strip of wood the exact size of the mouth opening and set it in place to form the opening through which the musician blows. Cut the other opening shown, and model a thin sharp edge for the air to strike against. Have this sharp edge in direct line with the edge of the stick. In other words, follow the ocarina mouthpiece as nearly as possible.

When the modeling is well done, carefully remove the stick and test the work by blowing upon it. A low, deep whistle should result from this effort. Take a nail and pierce the two holes on the open mouthpiece side, and then the eight holes on the opposite side. Make all holes small at first; then tune the little horn by increasing the size of the holes. The larger the hole, the higher the pitch.

If trouble is experienced, examine the mouthpiece. The little strip of wood may be slipped in again and the opening lined up with the sharp edge. Remember, too, that this mouthpiece strip must be thin so as not to let in too much air. The edge at the end of the strip must drop off at a right angle and the edge be sharp for the air to strike against.

When the modeling is finished, lay the piece away until perfectly dry, and then prepare to fire. To do this, bury the horn in a can of dry sand or dirt, and put the can in the fire chamber of a stove or fireplace. Keep a good fire going for several hours; then let the clay cool gradually as the fire goes out. When perfectly cold, the horn will be found well baked and ready for use. It may be painted any desired color.

The experiment will insure a great deal of fun, and is well worth trying. Several instruments may be tuned together so that a group can play at the same time.