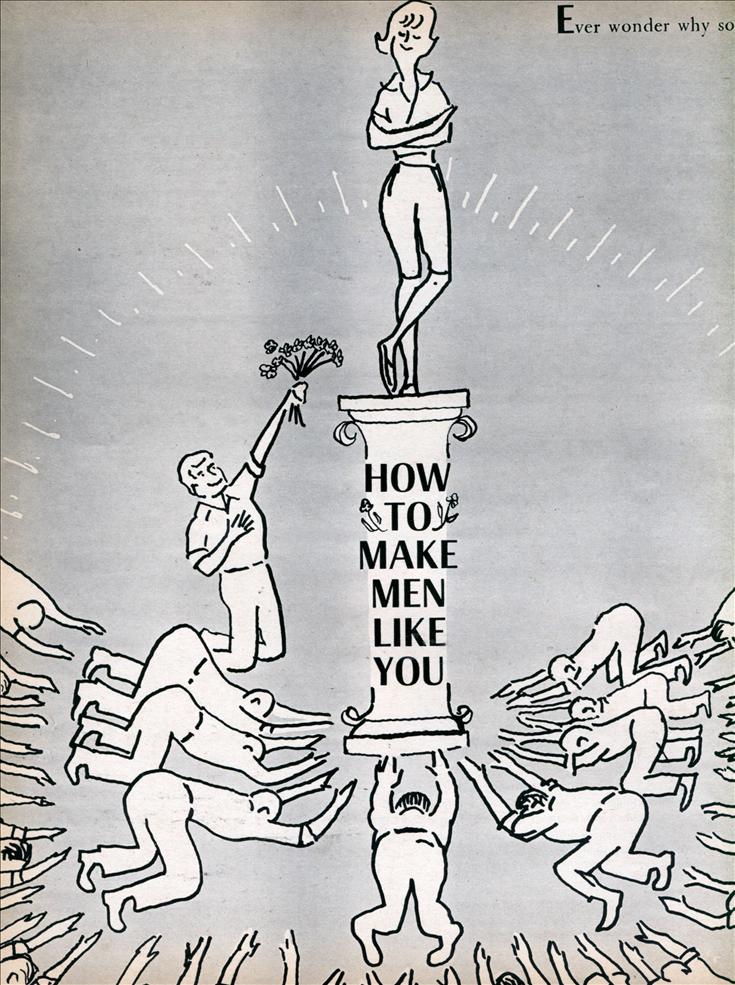 Ever wonder why so people are liked by everyone they meet Usually because they work at it—even though their effort may not be apparent to you. They are the ones who take the extra trouble to get a stranger’s name right, to remember a co-workers birthday, to telephone or write their thanks for a favor.

But many people in their eagerness to be liked or, as the case may be, romanced by a handsome young man, make the wrong kind of effort. It’s a mistake to strive too hard to make a good impression. Don’t be so busy putting yourself across that you neglect to give the other person the recognition he craves. If you want to be really well-liked by members of the opposite sex, make sure that your words and actions convey this simple message: “I recognize and am interested in you.”

Here are five surefire ways to get your “message” across —to bosses, customers and potential male friends:

1. Make a man feel important in front of Others, One of the most successful salesladies of a nationally known toiletries company confided her secret to her sales manager. She always managed to compliment a man in front of his friends or associates.

Naturally, a man likes to hear words of praise because it confirms his good judgment in being interested in you as an employee or new romance. But more than that, it makes him feel important in front of others as we said before. Compliments cost you nothing but they may be worth millions to him!

2. Groom yourself for popularity. Hair that’s neat and well-trimmed, scrupulously cleaned and pressed clothes, proper makeup—these things can make all the difference in the way people react to you.

It’s more than a matter of being attractive. To many men, carelessly groomed women indicates a “I couldn’t care less—about your opinion of me!” attitude. Yet this kind of offense is so easy to avoid. In the sizzle of summer —or in the winter when heavier garments may create a perspiration problem, a good deodorant will solve this problem. And how long does it take to give your face an extra pat of powder … to slip into clothes gently rather than wearing them so that they look thrown on which is exactly what you did …. or to comb your hair before a big appointment or an important date.

These things are just as important when you’re with men you like romantically as when you’re trying to win the favor of your boss or client. In either case, faultless grooming is a subtle compliment—your way of saying “I care!”

3. Give your conversation a personal angle.

After reading books and articles about how to be well-liked, many girls have concluded that the way to be popular is to talk very little about themselves and let the other person’s interests dominate the conversation.

This is an example of a good idea gone wrong. If you take it too literally, you will not only lose half the fun of conversation, hut you will quickly become known as a dull conversationalist. The trick is to bring the other person into the picture when you talk about yourself. Instead of . telling a handsome guy about your trip to Europe for example, lead into your remarks by saying “You would find Paris (or Munich or Madrid) especially interesting because . . .” Then tell him why. This would hold true if the place were Tampa, Florida or Hollywood, California. A surefire ego-booster is to tell the other person “I thought of you when I did this, or saw that.”

4. Give the young man a real hearing. Probably no one irks you more than the guy whose comments reveal that he really wasn’t listening to your remarks— unless it’s the one who interrupts you so constantly that you never get to finish them at all! i Many men are not even aware that they have the bad habit of interrupting. Can you honestly say that you don’t? Listen to yourself talk for the next few days, and make a mental note of how many times you finish someone else’s sentence. Maybe he’s a maddeningly slow talker —or maybe you were just so involved in the conversation that you got carried away. Whatever the reason, you can a be fairly sure that your contribution was not appreciated.

Although we spend 45% of our time just listening, according to speech experts, most of us actually hear only half of what is said to us! This can be a strain on personal relationships—and a costly error in the romance department.

5. Show each man that you accept his image of himself. Witty or pretty … an incisive thinker or a spell-binder talker … a demon for efficiency or a creative whiz—everyone you meet has a picture of himself which may or may not correspond with the facts. If you would like to be really attractive (apart from your physical endowments) to the opposite sex, it’s up to you to sense the image that he is trying to project—and show that you do accept it. This is not dishonesty—even in the case of the name-dropper, the would-be expert, or the man who pretends to have more wealth than he has.

Showing your acceptance of this image may involve nothing more than asking the young man’s opinion, or laughing at his “witty” jokes, or substituting respectful silence for sneers when he boasts of his social contacts. Once he receives the recognition he craves, he may relax long enough to let his genuinely good qualities show through.

It takes only a little thought and effort for you to protect your own image—as a person, a young, attractive, desirable female who men like to have around.