Mechanix Illustrated
Issue: May, 1951
Posted in: How to
Tags: coins, hobbies, money making
No Comments on How to Make Money from Money (May, 1951) 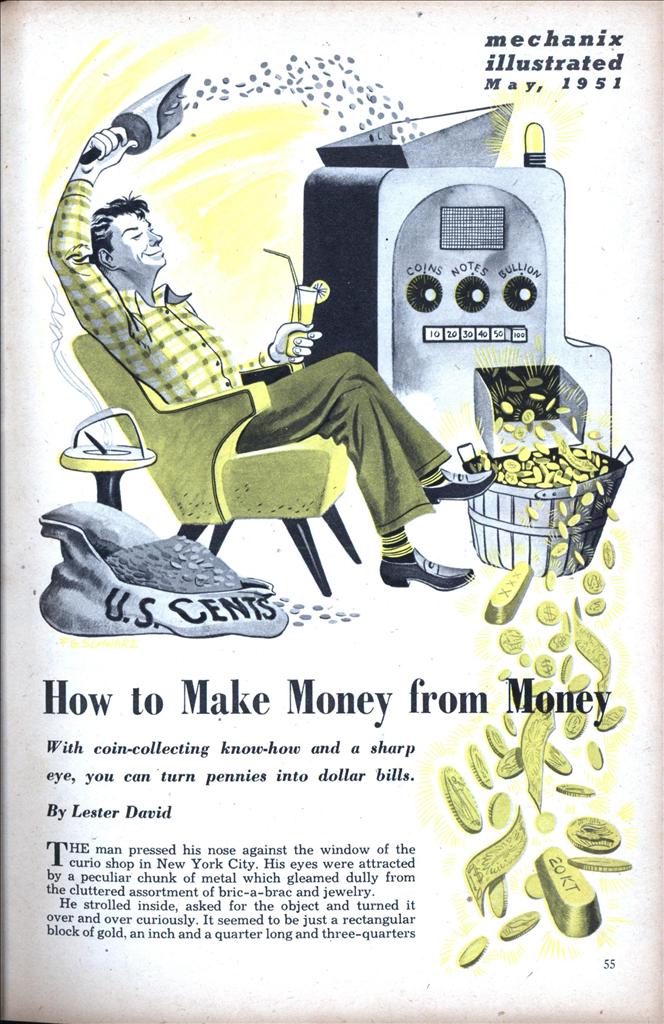 How to Make Money from Money

With coin-collecting know-how and a sharp eye, you can turn pennies into dollar bills.

THE man pressed his nose against the window of the curio shop in New York City. His eyes were attracted by a peculiar chunk of metal which gleamed dully from the cluttered assortment of bric-a-brac and jewelry.

He strolled inside, asked for the object and turned it over and over curiously. It seemed to be just a rectangular block of gold, an inch and a quarter long and three-quarters of an inch thick. The price? Just a few dollars. He bought it, then spent the next two years finding out what it was.

When the purchaser, coin dealer Joseph B. Stack, finally learned the answer he was flabbergasted. It was a gold ingot struck during the days of the California gold rush, only two pieces of which are in existence. One is in the Wells Fargo museum in San Francisco. The other is now in Mr. Stack’s coin shop, with a price tag well over $10,000!

Of course, you don’t find a bargain like that every day, but what keeps coin-col- lectors like Stack hot in pursuit of their quarry is the fact that smaller discoveries can and do happen constantly.

Coin-collecting, one of the oldest hobbies in the world, is still one of the most fascinating and profitable games of hide and seek. The coins are there, hiding; the collectors are continually seeking. And if you know what to seek, and the wheel of fortune turns your way, you can uncover a gold mine.

A Wisconsin farmer found a jugful of old coins under a loose floor board in a closet and brought them to his bank for appraisal. There were 105 dimes, quarters and silver dollars and one $3 gold piece. The first 105 coins were worth a skimpy $37.50, only their face value. But the gold piece, dated 1875, was a rarity. It brought the farmer a check for $1,750!

While plowing his field near Williams-town, Mass., another farmer turned up a stack of Pine Tree shillings, the first money coined in America by the Massachusetts Bay Colony. They were first struck by John Hull in his little back room on Tremont Street in Boston in 1652. That day’s plowing brought the farmer a profit of $2,700.

A Brooklyn, N. Y., schoolboy who had been bitten by the coin-collecting bug was watching a group of older boys matching pennies, nickels and dimes. Spotting an unusual coin in the lot, he casually offered to exchange it for a brand new dime and the offer was accepted. That shrewd bit of trading netted the schoolboy a neat bank account. The dime was an 1873CC specimen, without arrows, which dealers value at between $1,000 and $1,500. Then there’s the story of a Chicago holdup man who was more interested in collecting dollars than coins. He dug a pistol into the ribs of a noted numismatist, stripped him of his wallet containing $35 but left him with a chamois bag which held three small coins. The numismatist chuckled as the thief slithered away—the contents of the chamois bag were worth $15,000!

There are coins floating around the country worth anything from a few cents more than face value to astronomical sums. The secret lies in knowing which are the glittering prizes.

How can you tell the difference between just a coin and a coin worth a fortune? By learning a few tricks of the collectors’ trade.

The first thing to remember is that a coin is not necessarily valuable just because it is old. So don’t start dreaming of riches if you spot an ancient relic of Greek or Roman days among a pile of antiques somewhere. Chances are that a dealer will offer you a fast buck for it—-if he wants it at all.

The reason for this lies in the fact that there are so many ancient coins around. Expeditions are continually uncovering new batches—one university group recently found 26,000 bronze coins in huge clay jars and rotting bags while exploring Egyptian ruins. The ancients, it appears, had no banks and stashed away their jingling money by the jugfuls.

Rarity, then, is the big payoff in coin-collecting. For instance, if you can get your hands on the Confederate half-dollar minted in 1861 (an original not a restrike), you can name your own price because only four were struck. Their existence remained undiscovered until 1879, when one turned up. Another was found in 1910 and a third showed up soon after. The fourth and last is still missing.

An 1822 $5 gold piece is similarly highly sought because there are only three known pieces around. But get this—the U. S. coined 17,796 of them and nobody knows where the other 17,793 are!

The second vital rule to bear in mind is that the price of a coin depends to a tremendous extent on its condition, in the same way as a shiny new car is worth much more than a beatup one of the same make and year. At a recent auction, for instance, a 1793 one-cent piece in perfect shape drew a price of $2,000, but the same coin, worn by years of handling, can be bought anywhere for $10.

Hand in hand with an understanding of a coin’s condition is a sharp warning—never try to clean a coin to enhance its value. No matter how hard you scrub or what kind of acids or buffers you use, you can never restore the original brilliance. And you may lessen its value as a collector’s item.

A third important bit of know-how is this fact —very frequently the mint where a coin was struck rather than the date determines its value. For example, an 1887 $5 gold piece marked “S” for the San Francisco mint is worth about $10. But one which does not bear a % mint mark, signifying it was made in Philadelphia, zooms the price to several hundred -dollars.

Now, how can you make a profit out of coin-collecting? Joseph B. Stack, the man who found the gold nugget in the curio shop and who is acclaimed as one of the nation’s foremost numismatists says: “Learn all you can about coins, know which are the valuable ones and keep hunting, never stopping. In addition to the profit incentive, you will have one of the most stimulating hobbies you can dig into.”

How do you learn? Well, Vernon L. Brown, curator of the Chase National Bank collection of Moneys of the World, says: “Subscribe to numismatic publications, visit coin dealers. Learn how coins are classified as to condition. Then learn coin values to get a full knowledge of what coins are bringing in the open market.”

Which then, are the valuable ones? The big prizes are few and far between but there are hundreds upon hundreds of others worth up to 100 times face value. Values fluctuate, depending upon how many of the coins are on the market at that particular time and the -demand for them. If you want up-to-date values, collector Joseph Stack will send you a copy of his catalog if you send a stamp to him at 12 West 46th Street, New York 18, N. Y.

And, watch out for rumors! They come by the carload in the coin business. For example, when the Jefferson nickel was issued, a rumor was circulated that the flag was accidentally left off the top of Monticello and that the Treasury was planning to issue a new coin correcting the mistake. Immediately, people gathered as many Jefferson nickels as they could find and were stuck with nothing but five-cent pieces when the rumor exploded.

The same thing happened when the Washington quarter was issued. This time, the rumor mongers had “reliably heard” that it was to be discontinued after only one year. One gentleman changed every dollar bill he could get into Washington quarters until he had a drawer full of them. Then, when the Washington two-bit piece kept being put out, he sadly made several trips to the bank, loaded down with quarters worth only quarters.

On the other hand, there are so-called rumors which are founded on fact. But these can always be checked. In 1942, for instance, the Treasury struck a dime with a 1 superimposed on the 2. The rumors flew but collectors looked carefully and found it was so. That particular dime thereupon commanded a premium.

Perhaps the most famous coin rumor of them all is the one about the 1913 Liberty-head nickel. For years the story circulated that a few were put out despite the fact that the mint had no record of them. Then B. Max Mehl of Fort Worth, Tex., a prominent coin dealer, revealed that five actually were minted and printed a picture of one of the nickels in his catalog.

As a result, everyone from bootblack to banker went on a mad hunt for the coin, furnishing a hey-day for counterfeiters who took other Liberty-heads and switched dates. So if you should run across a 1913 Liberty-head, don’t turn handsprings. It’s a phony because none are in circulation now. All are accounted for.

Beware of phonies. There are many fakes in circulation, some so clever that only an expert can detect them. The best way to guard against being swindled is to give a fast brush to the sidewalk salesman who approaches you with a “rare” coin which he is willing to let you have for a fraction of its value.

Now, suppose you do find a valuable coin or corral a set of them, what should you do? Take them to a bank in your home town. They all have catalogs and can get in touch with a reliable dealer. Do not send your coins directly to a dealer until he asks for them. When you obtain his address, write a complete description of what you have and you’ll get a prompt answer. The American Numismatic Association at 336 North Clifton Avenue, Wichita 8, Kans., can supply you with a list of reputable dealers.

Follow the hobby and you’ll be in excellent company. Some of the world’s most noted personages are devotees—the King of Egypt, the Queen of Sweden, a host of dukes and earls, .not to mention a coterie of Hollywood stars from Adolph Menjou to Parkyakarkus. The late King Victor Emmanuel of Italy had a collection of 100,000 coins and the late Col. E. H. R. Green, son of the eccentric financier Hetty Green, bought more than a million dollars worth of coins during his lifetime.

The experts will tell you that you can’t expect to look through the handful of change you get from the butcher and pluck out a valuable coin. That’s the whole point—they are valuable because they are scarce. But there is always the chance that you will hit upon the big find.

And as long as that chance is there, the nation’s coin hunters will keep looking. After all, is there any pleasanter way of making money from money?