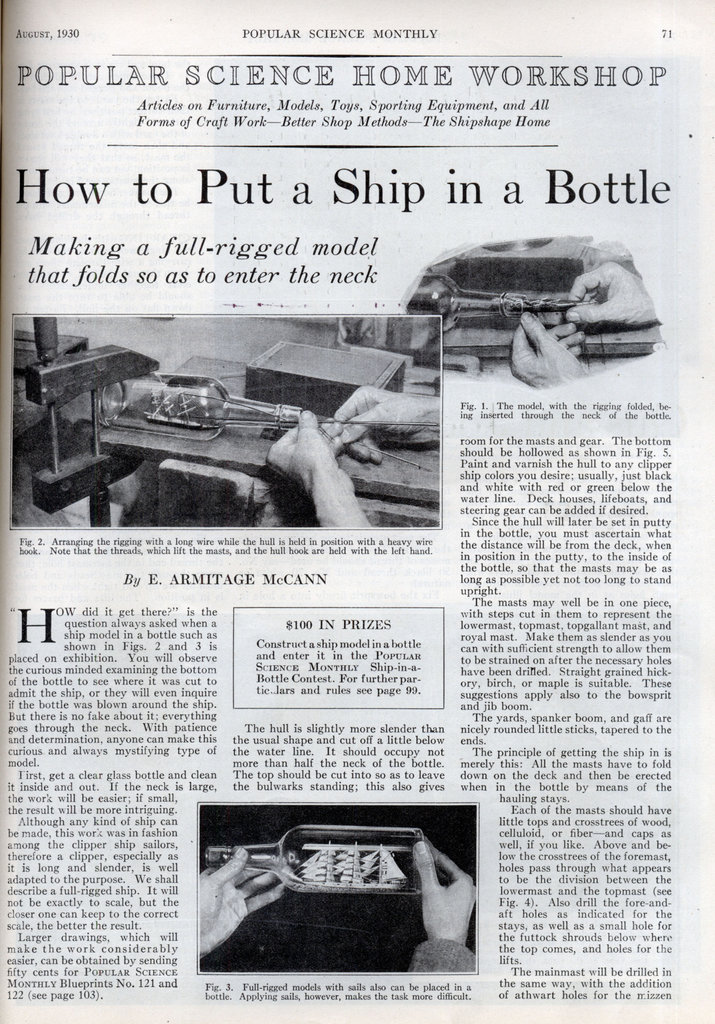 How to Put a Ship in a Bottle

“HOW did it get there?” is the question always asked when a ship model in a bottle such as shown in Figs. 2 and 3 is placed on exhibition. You will observe the curious minded examining the bottom of the bottle to see where it was cut to admit the ship, or they will even inquire if the bottle was blown around the ship. But there is no fake about it; everything goes through the neck. With patience and determination, anyone can make this curious and always mystifying type of model.

First, get a clear glass bottle and clean it inside and out. If the neck is large, the work, will be easier; if small, the result will be more intriguing.

Although any kind of ship can be made, this work was in fashion among the clipper ship sailors, therefore a clipper, especially as it is long and slender, is well adapted to the purpose. We shall describe a full-rigged ship. It will not be exactly to scale, but the closer one can keep to the correct scale, the better the result.

Larger drawings, which will make the work considerably easier, can be obtained by sending fifty cents for Popular Science Monthly Blueprints No. 121 and 122 The hull is slightly more slender than the usual shape and cut off a little below the water line. It should occupy not more than half the neck of the bottle. The top should be cut into so as to leave the bulwarks standing; this also gives room for the masts and gear. The bottom should be hollowed as shown in Fig. 5. Paint and varnish the hull to any clipper ship colors you desire; usually, just black and white with red or green below the water line. Deck houses, lifeboats, and steering gear can be added if desired.

Since the hull will later be set in putty in the bottle, you must ascertain what the distance will be from the deck, when in position in the putty, to the inside of the bottle, so that the masts may be as long as possible yet not too long to stand upright.

The masts may well be in one piece, with steps cut in them to represent the lowermast, topmast, topgallant mast, and royal mast. Make them as slender as you can with sufficient strength to allow them to be strained on after the necessary holes have been drilled. Straight grained hickory, birch, or maple is suitable. These suggestions apply also to the bowsprit and jib boom.

The yards, spanker boom, and gaff are nicely rounded little sticks, tapered to the ends.

The principle of getting the ship in is merely this: All the masts have to fold down on the deck and then be erected when in the bottle by means of the hauling stays.

Each of the masts should have little tops and crosstrees of wood, celluloid, or fiber—and caps as well, if you like. Above and below the crosstrees of the foremast, holes pass through what appears to be the division between the lowermast and the topmast (see Fig. 4). Also drill the fore-and-aft holes as indicated for the stays, as well as a small hole for the futtock shrouds below where the top comes, and holes for the lifts.

The mainmast will be drilled in the same way, with the addition of athwart holes for the mizzen braces. The mizzenmast needs no holes for stays, but has to have them for the main braces as well as one each for the spanker boom and gaff. At the lower end each mast is slightly rounded, and a small hole is drilled for the hinge wires.

If you make the masts of three separate spars, they must be firmly joined. In that case, the shrouds and backstays will pass between them instead of through small holes as in the model illustrated.

The bowsprit has three vertical holes for the head stays, and the boom and gaff each have one hole at the mast end. All the spars may be white, black, or varnished.

The next step is to rig her up, outside the bottle. Two or three different thicknesses of thread should be used—say No. 50 black thread and No. 70 white or natural.

Fix the bowsprit firmly into a hole in the bow and rig it as shown in Fig. 4. These ropes can be hitched to the boom and pegged into the hull.

Fasten the yards to the masts in their correct positions by first tying a thread tightly around the center of the yard with a double knot abaft and then carry the thread around the mast, so that they will remain in position, yet can be turned to lie along the masts (see Fig. 5).

The spanker boom and gaff should be tied to the mizzenmast with the thread through the drilled holes.

The easiest and neatest way to set up the rigging is to bore holes through the hull into the opening beneath as shown in Fig. 5. Thread a No. 9 needle with the heavy thread and start by pegging the thread end in the foremast hole; then I reeve through the mastheads and holes until all are up and tight when the mast is in position. The lifts and braces for each yard can be rigged as one. Start at one yardarm with a knot, reeve through the masthead, and knot to the other yardarm. Then, for the braces, reeve through the hole in the other mast or through the hull and carry the thread back to the first yardarm. The lift part of these lines should be painted black. All these threads must slide readily through their holes. Rubbing them with wax helps. The completely rigged model is shown in Fig. 6.

You may give the model topmast shrouds, rove through the top and a hole below the yard, and if you care to take the time, you may also add ratlines (steps) of very fine silk, although this is rarely attempted.

Now ease up the forestay, lay the yards along the masts, and lay the masts down on the deck. Make sure that all will go into the neck of the bottle, but do not let the model slip through. Draw it out and see if the masts will stand up again and the yards swing across. Then fold them down snugly once more.

Fasten the bottle with a clamp as shown in Fig. 2 so that it will not slip about while you are working on it. Put a layer of blue or green colored putty in the bottle after adding a little varnish to make it more tacky and to insure that it will dry firmly.

Sit in a good light and slide the hull with its gear into the bottle (see Fig. 1). With a long, stiff wire, press it into the putty sea. Untangle the end of the stays which extend from the neck and, still holding the model down, pull them one after the other, but be careful to do all the straining on the lower stays. At the same time, help the masts to rise with a bent wire. This operation is shown in Fig. 2.

When you have all the masts up, fasten the threads to the neck of the bottle, outside, and put a touch of glue where they come out of the hawse pipe and through the jib boom. Next, use the wire hook to swing the yards into position.

After the glue is dry, cut the lines off close with a sharpened wire, such as is shown in Fig. 7.

Additional picturesque touches can be added by inserting a lighthouse on a rock, a pilot boat or tugboats, and one or more fishing smacks in the water alongside.

As the ship is to be without sails, one or both anchor cables should come from the hawse pipes to the water.

Occasionally a bottle model is seen with sails, such as the one illustrated in Fig. 3. While the principle of assembling a model of this type is exactly the same, the addition of the sails, which are made of thin, flexible paper, complicates the work.