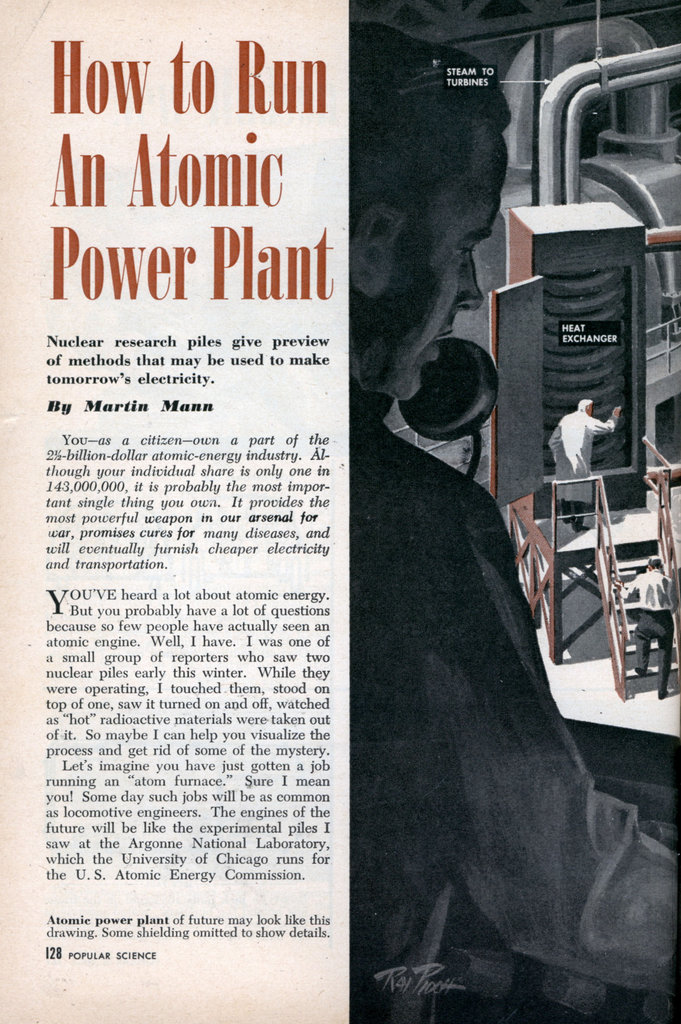 How to Run An Atomic Power Plant

Nuclear research piles give preview of methods that may be used to make tomorrow’s electricity.

Youâ€”as a citizenâ€”own a part of the 2-1/2 billion-dollar atomic-energy industry. Although your individual share is only one in 143,000,000, it is probably the most important single thing you own. It provides the most powerful weapon in our arsenal for war, promises cures for many diseases, and will eventually furnish cheaper electricity and transportation.

YOU’VE heard a lot about atomic energy. But you probably have a lot of questions because so few people have actually seen an atomic engine. Well, I have. I was one of a small group of reporters who saw two nuclear piles early this winter. While they were operating, I touched them, stood on top of one, saw it turned on and off, watched as “hot” radioactive materials were taken out of it. So maybe I can help you visualize the process and get rid of some of the mystery. Let’s imagine you have just gotten a job running an “atom furnace.” Sure I mean you! Some day such jobs will be as common as locomotive engineers. The engines of die future will be like the experimental piles I saw at the Argonne National Laboratory, which the University of Chicago runs for the U. S. Atomic Energy Commission, used to transfer heat out of power piles, but what that material will be is still a question. That’s one reason nobody has built a real power pile yet. A good heat-transfer fluid will probably be found among the metals that melt easilyâ€”bismuth might be a possibility.

Heavy water also has another job in this particular pile. It is the moderator that slows down the neutrons enough to keep the chain reaction going. It is one of the few” materials that make good moderators.

At Argonne, the space around the pile is cluttered with instruments, for this is a physics laboratoryâ€”it even smells like one. The pile is being used simply as a machine to produce neutrons, and the neutrons are being used in attempts to find out why atomic nuclei act the way they do.

Neutron beams for research come out of the pile through small holes in the thick concrete wall. When not in use, these are closed by cadmium plugs. Before a hole is opened, the area where the beam will shoot out is carefully roped off and the instrument setup checked by a “health-physics” inspector. He also tells the scientist conducting the experiment how long he may work there. For this beam can be as dangerous as X-rays: it can’t be seen, or smelled, or heard, or felt and its deadly effects pile up over a period of time.

Life with an Atomic Pile

If you keep out of the way of the research beams, however, you are perfectly safe. No neutrons leak through the thick concrete walls of the pile. According to Dr. Walter H. Zinn, Argonne’s director, you could set up housekeeping beside the pile and live there safely the rest of your life. A radiation counter held flat against the pile wall clicks slowly, registering only the cosmiarays that shower the earth everywhere. But when the counter is held in front of an open beam hole, the clicks speed up until the counter chokes, no longer able to keep track of the vast number of neutrons emerging. An atomic power pile, of course, would have no holes for research beams and would be still safer.

The only other place where radiation can get out of the pile to cause harm is at the “thimble,” a hole surrounded by lead blocks on the roof of the pile. Through the thimble, materials can be inserted into the pile to be bombarded by neutrons and turned into the “tracers” that promise so much in medical research (see “Mail-Order Isotopes,” PS Nov. ’47, p. 87). The pile is shut off when the thimble is opened, so that few neutrons pop out, but many deadly gamma rays escape through the hole.

Even so, there is little danger, thanks to meticulous safety measures. The raw materials are placed in small aluminum cans and lowered into the pile with a long flexible shaft having claws on its endâ€”a gadget much like a plumber’s snake.

Getting the materials out of the pile after they have been made radioactive is more tricky, for each small can may give off as many killing gamma rays as 1/6 ounce of radium. A “lead coffin,” a bomb-shaped lead container that can be opened top and bottom, is lowered ojyer the thimble and opened. The snakelike tool then drops through the coffin and thimble into the pile, picks up the isotope can, and pulls it into the coffin. The bottom door of the coffin then is closed, the snake freed from the can, and the top coffin door closed. The “hot” isotope is thus surrounded by six inches of solid lead and can be carried safely anywhere.

Some opening like the thimble will probably be standard equipment even in a power pile. Most experts think that radioactive isotopes will be a profitable sideline for power companies. And besides, there will have to be some way to take out used-up uranium and put in fresh fuel. Uranium replacement is not a problem with this pile, since it operates at such low power that the original charge will last about 30 years. But a commercial atomic power plant will run at a much higher power level and need new fuelâ€”though not nearly so often as a coal furnace does.

Pile No. 2 Is Right Across Hall

Argonne’s second pile is set up in a similar room just across the hallway. Atop it is an enclosed roomâ€”another building within a buildingâ€”in which experiments are conducted with the neutron beams coming up through holes in the floor. There are no holes for beams in the sides of this pile. Nor is there any special cooling system, since this pile operates at only one kilowatt and doesn’t make much heat. Instead of heavy water, the moderator that slows down neutrons is graphite (the “lead” of lead pencils), and this will probably be used in atomic power piles, too. Recently, however, a controllable pile using plutonium and fast neutrons has eliminated the moderator, so it may not be needed in power piles.

Some of the metal parts used around the Argonne pilesâ€”such as the long-handled tongs that hold materials in the neutron beamsâ€”are made of aluminum, because aluminum absorbs few neutrons. But aluminum would not be much good in a power pile, because it would melt at the high operating temperature. This is another of the tough problems facing the designers of atomic power plants. Steel can stand very high temperatures, but absorbs so many neutrons that the chain reaction would stop, or at least become very inefficient. One metal that meets both temperature and neutron-absorption requirements is beryllium. Unfortunately, it’s rather scarce and hard to work. Research aimed at filling these gaps in engineering knowledge has already started at several of the Atomic Energy Commission’s laboratories.

How long will it take? Some scientists estimate only two years will be needed to make the first electricity from atomic energy â€”experimentally. Uranium may not compete on a dollar-and-cents basis with coal, however, until much later. Where cost is not the most important factor, you may see atomic power fairly soon. Uranium-fueled battleships and submarines, able to cruise for years without refueling, may be afloat within five years.