Alas, none of the attributes included proficiency in L33t5p34k, a hot avatar or a snarky blog. How’s a modern boy to choose? 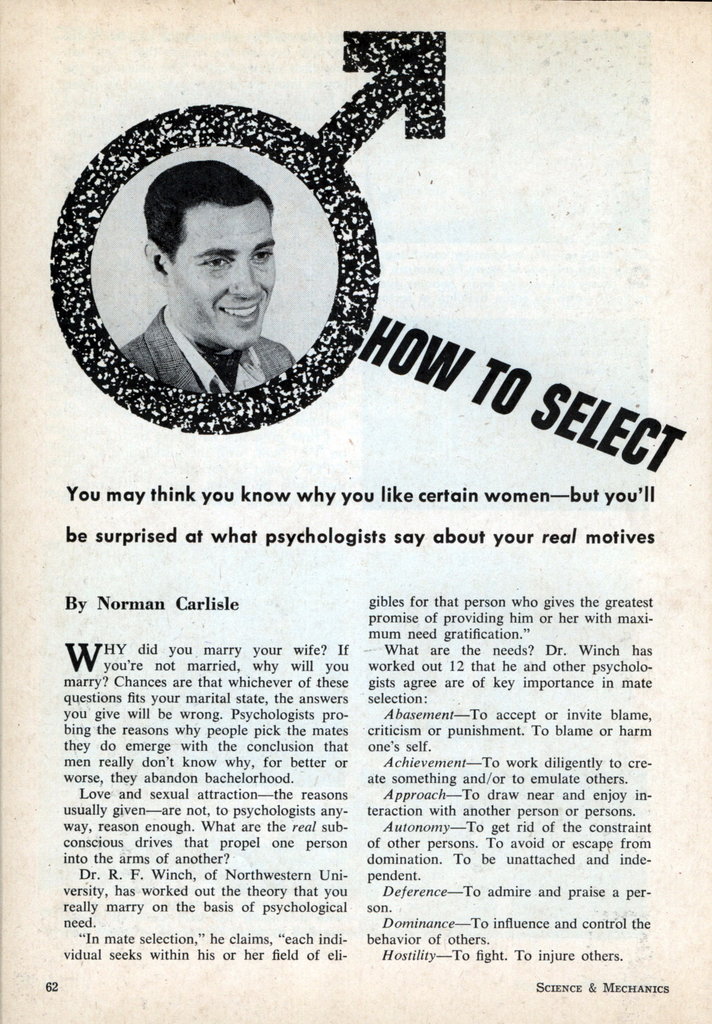 HOW TO SELECT A MATE

WHY did you marry your wife? If you’re not married, why will you marry? Chances are that whichever of these questions fits your marital state, the answers you give will be wrong. Psychologists probing the reasons why people pick the mates they do emerge with the conclusion that men really don’t know why, for better or worse, they abandon bachelorhood.

Love and sexual attractionâ€”the reasons usually givenâ€”are not, to psychologists anyway, reason enough. What are the real subconscious drives that propel one person into the arms of another?

Dr. R. F. Winch, of Northwestern University, has worked out the theory that you really marry on the basis of psychological need.

“In mate selection,” he claims, “each individual seeks within his or her field of eligibles for that person who gives the greatest promise of providing him or her with maximum need gratification.”

What are the needs? Dr. Winch has worked out 12 that he and other psychologists agree are of key importance in mate selection:

â€¢ Abasementâ€”To accept or invite blame, criticism or punishment. To blame or harm one’s self.
â€¢ Achievementâ€”To work diligently to create something and/or to emulate others.
â€¢ Approachâ€”To draw near and enjoy interaction with another person or persons.
â€¢ Autonomyâ€”To get rid of the constraint of other persons. To avoid or escape from domination. To be unattached and independent.
â€¢ Deferenceâ€”To admire and praise a person.
â€¢ Dominanceâ€”To influence and control the behavior of others.
â€¢ Hostilityâ€”To fight. To injure others.
â€¢ Nurturanceâ€”To give sympathy and aid to weak, helpless, ill person or animal.
â€¢ Recognitionâ€”To excite the admiration and approval of others.
â€¢ Status Aspirationâ€”To desire a socio-economic status considerably higher than one has.
â€¢ Status Strivingâ€”To work diligently to alter one’s socio-economic status.
â€¢ Succoranceâ€”To be helped by a sympathetic person. To be nursed, loved, protected, indulged.

Dr. Winch does not contend that matings which meet these needs necessarily bring about happy marriages. He is simply maintaining that, whether they know it or not, that’s the basis on which people tend to select their mates. A man who needed autonomy to escape the psychological influence of a domineering mother, for instance, might well marry a woman whose deep-seated need was hostility. The resultâ€”even though needs were being satisfiedâ€”could be a running battle.

In some cases, Winch’s theory would answer the often asked question, “What on earth does he see in her?” What he sees is an answer to his needs. The satisfaction of them can hold together what otherwise might seem like a pretty unlikely match.

Dr. Winch, a venturesome man with the courage of his convictions, challenged his colleagues to a little test that would demonstrate the Tightness of his contentions. Psychological descriptions of a number of married persons were prepared by his fellow psychologists. Winch sets himself to the task of saying who was married to whom. He was astonishingly successful, correctly matching six couples out of six on his first try. Armed with more complete descriptions, he equaled this record on other groups.

Do many men want to marry a girl just like the girl who married dear old dad? The savants are divided on that one. Most tests come out like one conducted by N.Y. psychologist D. P. Kent. He queried students in depth as to their mental image of a prospective mate. Then, six weeks later, he conducted another survey in which the students described their mothers’ characteristics.

In 20% of these replies, he found that, of six major traits on the mother list, there was only one that had also been listed in the mate requirements; in almost half, there were only two traits in common. In less than 2% of the cases did the mental image of a mate’s characteristics check on five of the six points.

A noted Hungarian psychiatrist, Dr. L. Szondi advances the astounding theory that your image of what you expect in a mate is governed by heredity! He figures it this way: From observing his patients he concluded that men tend to pick mates who are in “the same hereditary position.”

He tested his theory by taking photographs of large numbers of women whose psychiatric history he knew thoroughly. Subjects of his testâ€”men whose history he also had studiedâ€”were asked to look at the photos and pick the women who most appealed to them.

Szondi found that almost invariably the strongest reactions were to those who had emotional similarities! (These were certainly not obvious in the photographs, which were ordinary mug shots.) A man who came of a family in which melancholia was present, for instance, would express a strong liking for a picture of a woman who came of a family possessing the same characteristics.

There were some cases in which the reactions were just the opposite. These men indicated a strong dislike of women with similar emotional backgrounds, which may be one reason why other scientists dispute Szondi’s theories.

Does the masculine man seek the feminine woman? Some psychiatrists think so, nobody more vociferously than Dr. Otto Weininger, of Vienna, who gave that theory a boost in a tome called “Sex and Character.”

Everyone is a mixture of sex characteristics. That is, all men have some feminine traits, all women some masculine ones. Weininger’s contention was that an 80% masculine type would go for the 80% feminine type, and so on, up or down the percentages.

Weininger, who alleged that he could judge masculinity and femininity from facial characteristics revealed in photographs, used photographs to prove his case. When shown a number of them, he was able to indicate, with almost 100% accuracy, just which people would appeal to each other. In many cases, where the photographs were of husbands and wives, but mixed at random, he was able to state correctly, “This man picked this woman.”

Along with probing hidden psychological motivations, the social scientists have also been looking into the matter of what men believe to be the basis on which they choose a mate. Here they’ve come up with some interesting and sometimes contradictory conclusions.

One of the most extensive studies was carried out at Ball State Teachers College, an 8000-student institution in Muncie, Ind. Here Dr. Lester E. Hewett set out to analyze the dating and mating selections of students. He found out that they broke their considerations down into 20 factors, some major, some quite minor. The major ones are: Rates socially, likes home, is healthy, has sense of humor, is a good earner (male), a good cook (female), is ambitious, considerate, well groomed, attractive, religious, affectionate, intellectual, sensible about money, has some background, emotional maturity, normal heredity.

Among the striking facts to emerge from his surveys, Dr. Hewett reports, is the fact that a man, though he will select a mate from the girls he dates, has a considerably different set of standards for measuring them. Does a man want a real home-loving gal? Not for a date. Only 24% of the males considered a girl’s attitude toward home of crucial importance when they were dating her. But when they considered a girl as a mate, things changed a lot. Then 65% of the men averred that “likes home” was of crucial importance; visions of a well-kept house, hot meals on time, and pipe and slippers comfort seemed to be uppermost in their minds.

As for cooking, only 30% thought “likes to cook” was important in a date, while 66% put down culinary accomplishment as a quality they insist upon in a wife. The men expected their mates to treat them better than their dates. About 77% picked “considerate” as a must in a date, while, for a wife, 92% pegged that as being an absolute requirement.

Should a wife have an affectionate nature? Yes, said 82%. But, as for dates, only 67% desired that they lavish any affection on their escorts.

But what a man thinks he wants in a wife is often not what he really wants. “It is not uncommon,” says Dr. Allan Fromme, a mate selection authority, “to describe any number of characteristics desirable in the ideal of a mate which do not at all fit into their own lives.”

One of the commonest of clashes between statement and actual requirement is in the matter of intelligence. Dozens of surveys have indicated that here men tend to be all mixed-up. Typical was the one who insisted that he wanted a mate “with a very high IQ, capable of carrying on an intellectual conversation.” Psychological tests, however, showed that he really wanted a mate of lesser intelligence than himself. In fact, he had a deep-seated fear of marrying a wife smarter than he was, although he could never admit this to himself.

Then there was the case of the ardent fisherman, hunter, boater and golfer. He dated outdoor type girls, firmly stated that he wanted his wife to have an “interest in the outdoors.” However, psychological tests indicated this was really the last thing he wanted. What he really expected of a wife was that she should be a homebody type who would let him enjoy his outdoor pastimes with male companions. He didn’t want a girl who was crazy about the great outdoors, but one who would be crazy about an outdoor man!