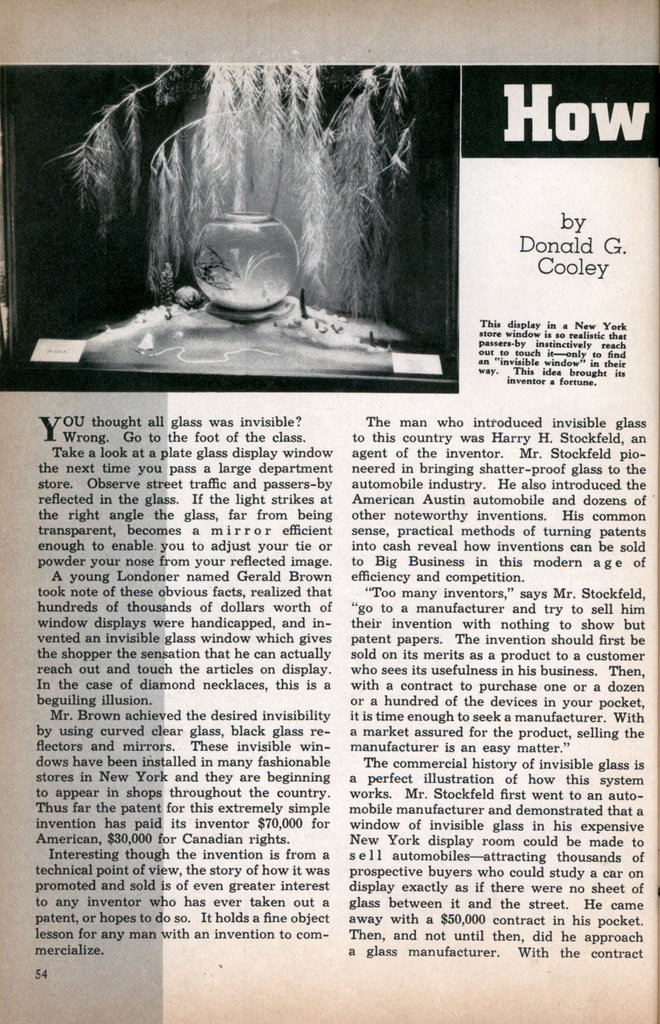 How to Sell Inventions

YOU thought all glass was invisible? Wrong. Go to the foot of the class.

Take a look at a plate glass display window the next time you pass a large department store. Observe street traffic and passers-by reflected in the glass. If the light strikes at the right angle the glass, far from being transparent, becomes a mirror efficient enough to enable you to adjust your tie or powder your nose from your reflected image.

A young Londoner named Gerald Brown took note of these obvious facts, realized that hundreds of thousands of dollars worth of window displays were handicapped, and invented an invisible glass window which gives the shopper the sensation that he can actually reach out and touch the articles on display. In the case of diamond necklaces, this is a beguiling illusion.

Mr. Brown achieved the desired invisibility by using curved clear glass, black glass reflectors and mirrors. These invisible windows have been installed in many fashionable stores in New York and they are beginning to appear in shops throughout the country. Thus far the patent for this extremely simple invention has paid its inventor $70,000 for American, $30,000 for Canadian rights.

Interesting though the invention is from a technical point of view, the story of how it was promoted and sold is of even greater interest to any inventor who has ever taken out a patent, or hopes to do so. It holds a fine object lesson for any man with an invention to commercialize.

The man who introduced invisible glass to this country was Harry H. Stockfeld, an agent of the inventor. Mr. Stockfeld pioneered in bringing shatter-proof glass to the automobile industry. He also introduced the American Austin automobile and dozens of other noteworthy inventions. His common sense, practical methods of turning patents into cash reveal how inventions can be sold to Big Business in this modern age of efficiency and competition.

“Too many inventors,” says Mr. Stockfeld, “go to a manufacturer and try to sell him their invention with nothing to show but patent papers. The invention should first be sold on its merits as a product to a customer who sees its usefulness in his business. Then, with a contract to purchase one or a dozen or a hundred of the devices in your pocket, it is time enough to seek a manufacturer. With a market assured for the product, selling the manufacturer is an easy matter.”

The commercial history of invisible glass is a perfect illustration of how this system works. Mr. Stockfeld first went to an automobile manufacturer and demonstrated that a window of invisible glass in his expensive New York display room could be made to sell automobilesâ€”attracting thousands of prospective buyers who could study a car on display exactly as if there were no sheet of glass between it and the street. He came away with a $50,000 contract in his pocket. Then, and not until then, did he approach a glass manufacturer. With the contract offering convincing proof, the selling job was easy.

“Go to the president or directing head of the corporation you are trying to sell,” Mr. Stockfeld advises. “An inventor usually is merely wasting his time when he deals with minor executives who do not have full authority to make decisions.”

But, once having gained an audience with a man in authority, how should the inventor proceed in selling a patent? This depends somewhat on the nature of the invention. Every patent involves problems and possibilities all its own. Fundamentally, however, the buyer must be made to respond to the same motive which led the inventor to create his device in the first placeâ€”the profit urge. The inventor needs to prove but one of two things: either the invention will make money for the buyer, or will save him money. Mr. Stockfeld advises the preparation of a prospectus which, in great detail, shows exactly how the invention will do just these things. The preparation of such a prospectus * demands a full knowledge of the business involved, and an analytical approach. Facts and figures must be accurately presented, and all angles considered.

Suppose you were selling an invisible glass window. Analyzing the invention, your presentation of facts would run something like this: The present display window is designed to sell goods. It must bring in $50,000 worth of business a year, just to pay for itself, the expense of keeping it dressed and displays changed. The invisible glass window will cost $12,000. It attracts more window shoppers, brings more people into the store because of its novelty and the fact that, since there is no visible glass to shut off the customer from the display, there is an unconscious feeling that the customer is already inside the store. Because the window attracts so much attention, the high-salaried window dressers always put forth their best efforts to keep it attractive. In a rainstorm, invisible windows are not affected because of the curved glass and consequent setback from the street. And so on in complete detail.

High-pressure selling methods are unnecessary and usually work to the disadvantage of the inventor. If the product has merit, an intelligent presentation suffices and the prospect may be permitted to sell himself.

Some inventions lend themselves to selling by demonstration. In the case of a new super-strength steel in which Mr. Stockfeld was interested, he placed an automobile axle casing made of his steel alongside one taken from an expensive new car. The man he wished to interest watched while he gave them a sales talk without words.

A weight of one ton was dropped on the standard car axle from a height of 40 feet. This was repeated seven times before the casing cracked. Then the new steel casing was subjected to the same test. The ton weight crashed upon it 85 times before its tough heart cracked. After that visual demonstration, all that remained was to check costs and figures.

The most convincing argument an inventor can present to a manufacturer is definite proof that a market for his invention exists. We have already seen how this worked in the case of invisible glass.

Suppose you have invented a new can opener which you hope to sell through chain stores. You can have a few gross made up, place them in local stores on consignment, and after they are sold obtain letters from the store managers recommending the can opened as a profitable item. Armed with a sheaf of these letters, you will be welcomed by chain store buyers who can be shown in cold black and white that the can opener would be a big seller in their stores.

“An inventor must not depend too much on his own opinion of his invention” Mr. Stockfeld says. The inventor is so close to his invention, and has poured so much of his heart’s blood into it, that it is difficult for him to see it objectively. It is one thing for an invention to work perfectly; it is another thing for it to pass the acid test of commercial acceptability.

Yet, if he does not wish to call in outside sales help, the inventor can overcome this natural handicap if he will imagine himself to be a prospective buyer and figure out reasons why he should not buy the invention. If he has a reasonable answer for all objections, if he can turn them into positive selling arguments, then the inventor is ready to approach a prospect and not before.