Popular Mechanics
Issue: Mar, 1924
Posted in: House and Home, How to
Tags: how its made
No Comments on How Wallpaper is Made (Mar, 1924) 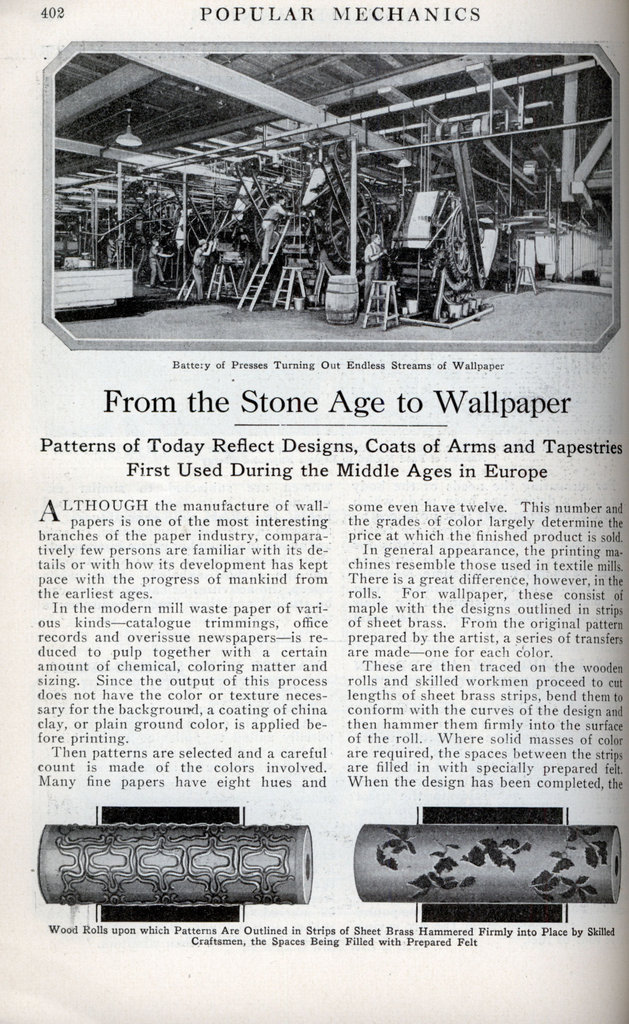 From the Stone Age to Wallpaper

Patterns of Today Reflect Designs, Coats of Arms and Tapestries First Used During the Middle Ages in Europe

ALTHOUGH the manufacture of wall-papers is one of the most interesting branches of the paper industry, comparatively few persons are familiar with its details or with how its development has kept pace with the progress of mankind from the earliest ages.

In the modern mill waste paper of various kindsâ€”catalogue trimmings, office records and overissue newspapersâ€”is reduced to pulp together with a certain amount of chemical, coloring matter and sizing. Since the output of this process does not have the color or texture necessary for the background, a coating of china clay, or plain ground color, is applied before printing.

Then patterns are selected and a careful count is made of the colors involved. Many fine papers have eight hues and some even have twelve. This number and the grades of color largely determine the price at which the finished product is sold.

In general appearance, the printing machines resemble those used in textile mills. There is a great difference, however, in the rolls. For wallpaper, these consist of maple with the designs outlined in strips of sheet brass. From the original pattern prepared by the artist, a series of transfers are madeâ€”one for each color.

These are then traced on the wooden rolls and skilled workmen proceed to cut lengths of sheet brass strips, bend them to conform with the curves of the design and then hammer them firmly into the surface of the roll. Where solid masses of color are required, the spaces between the strips are filled in with specially prepared felt. When the design has been completed, the surface formed by the protecting strips is ground in a lathe until uniform, so that it will print evenly.

Paper is fed to the machines from a reel just in front of which is a short belt conveyor. Several yards of paper are carried on this in the form of loose folds, giving sufficient leeway to permit change of rolls without stopping the press. Passing through the printer, each roll contributes its particular color. As the paper emerges bearing the complete design, it is picked up by a series of moving space bars and carried in short festoons underneath a duct from which warm dry air issues.

With some patterns, this completes the process. In others, however, subdued effects are produced by overprinting the whole design with a sort of screen, usually in white. Embossed effects also may be obtained by running the paper between rollers having raised surfaces. Special papers include oatmeals and varnished tile. The surface of the former consists of colored or tinted stock containing comparatively fine particles of sawdust. In the latter, the design is printed from engraved rollers and the entire surface is coated with transparent spirit varnish.

In its use in modern homes, wallpaper resulted from the demand for refinement and comfort. In the earlier days the entire household, servants, and all, lived in the “great hall.” Then the need for more privacy was felt as culture developed, and the “with-drawing room” was introduced for the women of the house. From this term the modern word “drawing-room” is derived. The knights who took part in the crusades were so completely inclosed in armor as to be unrecognizable. In order to establish their identity, each one adopted a distinguishing emblem, which was painted on their shield and embroidered on their surtout, or outer coat. When they returned from the campaign they hung their shields and helmets on the walls of their castles, and these made such decorative effects that along came the interior decorator who elaborated on the idea and painted these devices on the walls, which also were adorned with handworked tapestries.

Among the motifs used were floral and animal formsâ€”fruit tied in bunches with leaves and flowers and festoons.

And so today, these same patterns are found in exterior and interior decoration everywhere, and in wallpapers they are in constant evidence.