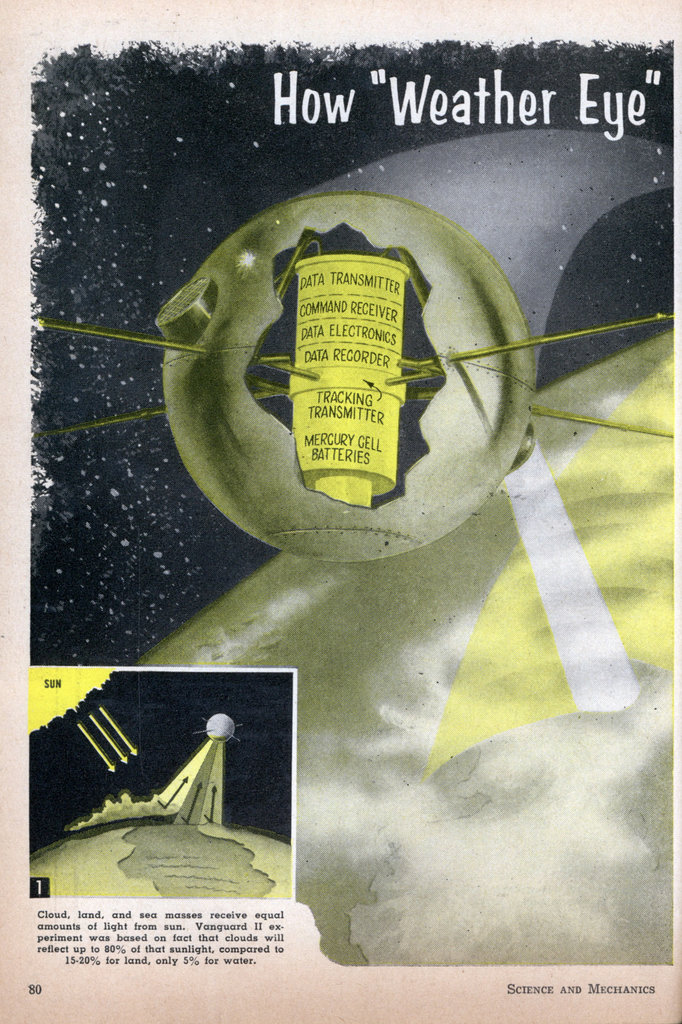 THE Vanguard II “weather eye” satellite has paved the way—although it’s a bumpy road— to continuous, world-wide mapping of the world’s weather.

The forerunner of more-advanced satellites scheduled for orbiting this year, it has provided some basic know-how in the use of artificial moons for meteorological purposes.

What it also has done is give scientists a crude picture of the cloud patterns over a large part of the earth. While forecasters now are limited to scattered ground observations, Vanguard II was above the clouds—over oceans and unpopulated areas—making continuous reports. And though cloud data alone can’t guarantee accurate forecasts, it is one of the most important factors.

The weather eye was launched from Cape Canaveral, Fla., into an equatorial-type orbit with a perigee of 347 miles and an apogee of 2,050 miles (see Fig. 2).

A 20-inch sphere weighing 21-1/2 pounds, it spins at about 50 rpm, which—with a gyroscope effect —keeps its axis always pointing in the same direction in space. Launching was timed so that perigee would occur at about local noon over the equator, insuring that the satellite would be at its closest to earth during daylight for the 19-day lifetime of the mercury cell batteries powering its instrumentation.

Two photocells (see Fig. 3)—projecting diametrically opposite from each other at 45° from the spin axis—scanned the earth. At perigee, both photocells “saw” the earth (see Fig. 2), while at apogee both “eyes” saw above the horizon. As Vanguard II spun, each eye in turn scanned a swath on the earth about seven miles wide and 600 miles long. Thus, as the satellite moved in its orbit, the eyes covered a long path, different each time around since the satellite’s orbit changed constantly with respect to the earth’s surface.

Each photocell picked up reflected sunlight from clouds and land and sea masses. The reflections, in the form of infrared radiation, were focused onto a tiny infrared detector, which converted them into electrical signals proportionate to their intensity. These signals were stored on a pigmy tape recorder (see Fig. 4) inside the satellite.

Since clouds reflect up to 80% of the sunlight that hits them, while land reflects only about 10% to 15% and water about 5% (see Fig. 1), the variation in intensities produced a definite range of signals on the tape and hence a rough electronic “picture” of cloud coverage. The photocells fed the tape with opposite polarities, so that during data reduction, technicians could monitor one eye at a time to avoid duplication.

The tape recorder stored 50 minutes of data during each trip over the sunlit side of earth— roughly 25 minutes on each side of perigee. Then, as the satellite swung into the dark side of earth, the nearest ground station sent a coded command signal which triggered the tape recorder to run in reverse and transmit the data to earth, where it was re-recorded. The satellite’s tape was erased at the same time, readying it for new data. Playback speed of 15-in. per second compared to recording speed of 3/10-in. per second was needed, because only about one minute of telemetering time was available each orbit.

The tapes made at the ground stations were sent to the Army Signal Corps lab at Fort Monmouth, N. J., where they converted them into crude film strips. Because there was considerable distortion at the edges of the 600-mile swath scanned, only the central 300 miles shown were used when the film strips were fitted together to form a global cloud picture.

A tracking transmitter in Vanguard II kept the technicians up to date on the satellite’s whereabouts, and this information was correlated with the film data — plus routine ground cloud observations—to pinpoint where the pictured clouds were located.

Several shortcomings showed up, most of which had been anticipated by the weather rocketeers.

The mercury cell batteries lasted only 19 days, although the satellite itself may orbit for a century. To insure maximum use of the mercury batteries, however, tiny silicon solar batteries mounted on the detector units turned off the equipment when the satellite was on the dark side of the earth, then turned it on as it re-entered sunlight. Improved solar or atomic batteries—the designs of which have progressed much since the cloud cover satellite design was “frozen”—should enable future satellites to. gather and transmit information almost indefinitely.

Another of the problems is the limited degree to which photocells can differentiate between various clouds. Even at perigee, Vanguard II could detect only those masses larger than seven miles in diameter. And where a thick cumulus reflects about 80% of the sunlight it receives, a thin cirrus might as well not be there at all, as far as reflections are concerned.

Yet another difficulty—and perhaps the most crucial one—was the lag between the recording of data and turning it into useful information. Eventual aim is to have data from such satellites ready for use almost instantaneously.

Some of the bugs should be ironed out later this year when another weather eye—this one carrying miniature television cameras—is sent into orbit lower than Vanguard II.

Goal of the weather satellites is the gathering of basic meteorological knowledge that will tell forecasters the “why” of weather. With satellites measuring cloud motion, atmospheric temperatures, air moisture content, ozone content, and radiation flow into and out of the atmosphere, the forecasters hope to be able—for the first time —to say with 100% accuracy: “It’s going to rain Wednesday, and here’s why.”

And beyond that, after the basic processes in the atmosphere are understood, is actual weather control. It’s a long way off, but Vanguard II was the first step.