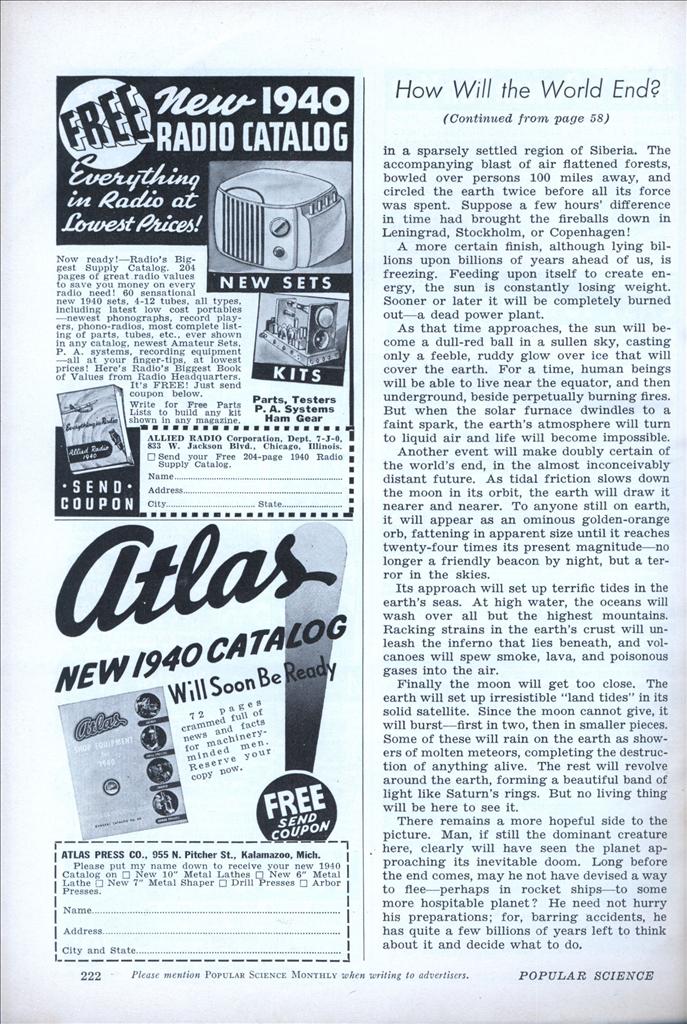 WHAT will the end of the world be like ? In the Fels Planetarium of the Franklin Institute at Philadelphia, recently, thousands of persons witnessed a preview of this spectacle, the most gripping that man will ever see. “Canned” sound effects from great electrical storms added realism to the thrilling images of cosmic cataclysms thrown on the planetarium dome by a giant projector to dramatize four possible ways in which life on our planet may be destroyedâ€”by burning, collision, freezing, and explosion. Paintings reproduced in these pages show the tragic scenes they suggest. Sometimes a star becomes a “nova,” or mysteriously flares up in brightness. Suppose that suddenly our own star, the sun, should likewise act as if a vast bellows were blowing a draft into its molten interior. In eight brief minutes the resulting blast of radiant heat would reach the earth, and all life on this planet would vanish in clouds of steam and puffs of smoke. Fortunately, however, the chances of such celestial fireworks are remote. The sun probably was a nova when the solar system was born and is unlikely to repeat the performance.

Instead, however, the sun might undergo only a twofold or threefold rise in temperature, as astronomers have seen happen to a star in the constellation of Cassiopeia. A few more degrees here would bring a slower but no less inevitable end. Polar ice would melt, and the ocean would rise 200 or 300 feet, destroying great coastal cities. The rising temperature would draw more moisture into the air. Constant storms would rack the world. Finally life would succumb to the steamy, superheated atmosphere.

When the planetoid Hermes whizzed past the earth in October, 1937, it suggested another accidental way that at least a large part of the world’s population may be wiped out. A newly discovered stray from a remote cluster of “baby planets,” Hermes missed us by the uncomfortably close mar- gin of less than 400,000 miles, or not much more than the distance to our own moon. Traveling at 70,000 miles an hour, the sky projectile was less than six hours’ flight away from us at its nearest point! It was the earth’s narrowest escape from a major crash in the history of astronomical observation.

Hermes ranks as one of the smallest of the known planetoids, measuring only a mile or so in diameter, and the earth might suffer little more than a violent jolt if the baby planet hit an uninhabited land area. In case it landed in an ocean, however, devastation by tidal waves would be appalling. And if it struck a crowded metropolitan area, the toll of life would equal that of a world war. People that it missed would still be threatened, not only by terrible earthquakes, but even more by a searing air blast of hurricane velocity that would mushroom out from the point of impact. Acting as a piston to compress the atmosphere against the earth’s surface, the planetoid would heat it like air in a tire pump, scorching to a crisp anything in the vicinity.

Such a phenomenon was observed on a smaller scale in 1908, when a swarm of meteoritesâ€”really the head of a small cometâ€” struck the earth (Continued on page 222) in a sparsely settled region of Siberia. The accompanying blast of air flattened forests, bowled over persons 100 miles away, and circled the earth twice before all its force was spent. Suppose a few hours’ difference in time had brought the fireballs down in Leningrad, Stockholm, or Copenhagen!

A more certain finish, although lying billions upon billions of years ahead of us, is freezing. Feeding upon itself to create energy, the sun is constantly losing weight. Sooner or later it will be completely burned outâ€”a dead power plant.

As that time approaches, the sun will become a dull-red ball in a sullen sky, casting only a feeble, ruddy glow over ice that will cover the earth. For a time, human beings will be able to live near the equator, and then underground, beside perpetually burning fires. But when the solar furnace dwindles to a faint spark, the earth’s atmosphere will turn to liquid air and life will become impossible.

Another event will make doubly certain of the world’s end, in the almost inconceivably distant future. As tidal friction slows down the moon in its orbit, the earth will draw it nearer and nearer. To anyone still on earth, it will appear as an ominous golden-orange orb, fattening in apparent size until it reaches twenty-four times its present magnitudeâ€”no longer a friendly beacon by night, but a terror in the skies.

Its approach will set up terrific tides in the earth’s seas. At high water, the oceans will wash over all but the highest mountains. Racking strains in the earth’s crust will unleash the inferno that lies beneath, and volcanoes will spew smoke, lava, and poisonous gases into the air.

Finally the moon will get too close. The earth will set up irresistible “land tides” in its solid satellite. Since the moon cannot give, it will burstâ€”first in two, then in smaller pieces. Some of these will rain on the earth as showers of molten meteors, completing the destruction of anything alive. The rest will revolve around the earth, forming a beautiful band of light like Saturn’s rings. But no living thing will be here to see it.

There remains a more hopeful side to the picture. Man, if still the dominant creature here, clearly will have seen the planet approaching its inevitable doom. Long before the end comes, may he not have devised a way to fleeâ€”perhaps in rocket shipsâ€”to some more hospitable planet? He need not hurry his preparations; for, barring accidents, he has quite a few billions of years left to think about it and decide what to do.